Today, the American Gold Eagle Coin remembers the arrival of the first cross-country train carrying $20,000,000 in gold on August 9, 1892.

From the Pittsburg Dispatch newspaper of August 10, 1892:

Millions Given Up By the Men Who Guarded Them Faithfully Clear Across the Continent.

More Money in One Lump Sum Than Ever Traveled Before in the History of the World.

A Novel Sight in the Metropolis.

(Special Telegram to the Dispatch.)

New York, Aug; 9. Precisely at 10:46 o’clock this morning the special mail train, which left San Francisco at 6:30 o’clock last Thursday evening carrying $20,000,000 in United States gold coin, came to a standstill in the annex of the Grand Central station.

There was nothing in the appearance of the train to attract attention. It was made up of a special passenger coach, two railway mail cars, a baggage car and an express car.

The side doors of the express and mail cars had been thrown open, and clustered at each was a group of men with big colt revolvers stuck in their belts or held carelessly in their hands. They looked more like tramps with their soot-begrimed faces and old clothes than faithful guardians of Uncle Sam’s wealth.

A tall man with a long linen duster jumped from the first car of the train and shook hands with another man who had been anxiously pacing up and down in the yard waiting for the train’s arrival.

The first man was Captain James E. White, General Superintendent of the Railway Mail Service, who brought the train through, and the man he greeted was the Second Assistant Postmaster, J. Lowrie Bell, who came on from Washington last Saturday to see to the safe arrival of the train with its precious freight.

The Largest Shipment Since Adam.

Never before has so large a single shipment of gold crossed this continent, nor, in fact, has any such sum ever been transported such a distance in the history of the world.

Arrangements had been made to transfer the gold to the Sub-Treasury in the regular United States mail wagons, and 18 of them were waiting in line at Madison avenue and Forty-sixth street, under the charge of transfer clerk J. W. Tiebout.

There was not a moment’s delay in getting the gold out of the cars. The big mail wagons backed right up to the car doors, and a dozen yardmen under the charge of Station Master Henderson were mustered into service to lift the boxes of gold coin into the wagons.
Each of the stout wooden boxes, which had been built especially to carry this shipment, contained $40,000 in gold coin and weighed 150 pounds.

Each was a registered mail package, which had been duly numbered in the regular order by the postmaster at San Francisco.

Sunk into the top of each box in two places was the seal of the United States Assistant Treasurer at San Francisco.

In each of the four cars were piled 125 boxes, containing $5,000,000 in all. Each car was in charge of a division superintendent of the railway mail service, with ten men to assist him in guarding the millions.

Each of the boxes was 18 inches long with a handle at either end. It took two of the yard men to lift a box and carry it into the mail van.

As fast as the vans were loaded two of the guards in the car from which the gold had been taken were detailed to accompany each down to the sub-Treasury.

The 57 guards who had taken turns in watching the treasure all the way from San Francisco did not relax a bit of their vigilance. They kept the big pistols handy as the cars were unloaded, and the guards that went down in the vans had their revolvers in plain sight, too.

Revolvers Out on Every Side.

“Get on the top of that wagon,” said Superintendent Pepper, instructing one of his men. “Keep your hand on your revolver and watch the tail of the wagon.”

The guards strolled up and down in front of the cars fumbling their revolvers in a way that was very trying to the nerves of the onlookers. One man had a revolver stuck loosely under his trousers band, and held another carelessly under his arm.

The work of unloading the cars began shortly after 11 o’clock, and the last of the 18 bars rolled away from the station at 12:30 o’clock.

Several long boxes filled with cavalry carbines were taken out, along with boxes of ammunition. There were 3,000 rounds of ammunition aboard, 2,000 cartridges for the rifles and 1,000 for the revolvers.

The trips of the vans down to the sub-Treasury made a sensation, for the news of the arrival of the gold train had spread. The two guards that accompanied each van sat on either side of the drive.

They still had their long Colt revolvers. Some carried their weapons in their laps, while others gripped them in their pockets, ready for use in an instant.

Glad to Be Rid of the Fabulous Sum.

The four vans arrived at the sub-Treasury building at 12:40 o’clock. They approached the building on the Pine street side and the first wagon backed up to the sidewalk to unload.

“Well, I am glad it is all over with,” said Mr. Bell as the last box came out of the wagon.

When the money was turned over to Assistant Treasurer Ellis H. Roberts he gave a similar receipt and notified the Secretary of the Treasury that he had received $20,000,000 subject to count.

The counting of the gold will not be done for several days.

The method is to count one bag full and then get its exact weight. After that the other bags are weighed, the first one being used as a standard.

If there should be the slightest discrepancy in the weight of any bag the contents of that one would be counted separately.

The American Gold Eagle Coin shows with an image of the Grand Central Depot, circa 1894. 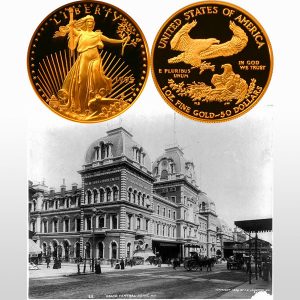