Today, the California Fractional Gold Coin tells the stories of separate Alaskan Gold Rushes, one of the late 1800s and one of the early 1900s.

First, the latter story achieved only a brief mention as a new gold strike in Alaska in the newspapers of October 27, 1917.

New Gold Stampede Is On in Alaska

News of a new gold strike about 25 miles from the head of Good News bay, in western Alaska, was brought to Seattle by Captain S. T. L. Whitlam of the power schooner Eunice, which reached port Thursday.

Captain Whitlam said a stampede of miners from Bethel and the entire Kuskowim river country was on. It is a placer strike, he said.

However, this “rush” did not compare to the earlier Gold Rush days in Alaska.

In the Mining and Scientific Press of June 1917, T. A. Rickard told the story of three Swedes and their success, loss and success again in his article, Mining: The Great Adventure.

One more story: that of the three lucky Swedes, as they became known in the North.

John Brynteson was a Swede who had worked in the iron mines of Michigan. Erik Lindblom, another Swede, was a tailor in San Francisco when the lure of gold called him from the bench to Alaska. Jafet Lindeberg, a Norwegian, came to Alaska in charge of the herd of reindeer that the United States government brought over from Lapland.

These three men chanced to meet at Council, on the Seward peninsula, in August 1898.

They formed what Lindeberg called “a prospecting companionship,” a little company of honorable adventurers in search of the Golden Fleece. They were energetic and intelligent fellows.

While prospecting roundabout Council they studied the methods of placer-mining and took pains to learn the mining regulations; finding that all available ground in the district had been over-run by stampeders and staked to the mountain-tops, they decided to go elsewhere.

Brynteson had been farther up the coast with some other prospectors just before he met Lindeberg and Lindblom, and he told them of the finding of gold in the creeks at the upper edge of the coastal plain.

So they left Council and went down to Golovin bay, where they procured a boat and provisions. They set sail September 11, 1898, on a voyage that proved eventful.

Proceeding along the coast they stopped at the mouths of the streams that flow into Bering Sea; they did some prospecting, but not finding enough gold, went farther west to where the Snake river meanders through the tundra to the sea.

This became the site of Nome. It was about 100 miles from their starting point.

Having been to Nome, I can picture the desolate landscape—then absolutely devoid of human touch—the chill gray waters lapping a long beach fringed by the moss-covered plain stretching to forbid ding hills.

They did not linger on the seashore, although the beach-sand showed some gold. They ascended the slow-flowing river in their boat as far as the mouth of a creek where Brynteson had panned gold on his former trip.

Lindeberg was quick to infer that the gold on the shore must come from up-country, and determined to search for its source.

They prospected several creeks the names of which now to an Alaskan are as eloquent of gold as Colchis or Pactolus to Macaulay’s schoolboy.

It is a remarkable fact that these three men, novices in alluvial mining, should have been able, after a hasty inspection, to select what later proved to be the richest portions of several creek-bottoms.

They located a joint discovery claim on Anvil creek, and then each located a claim in his own name on this creek as well as on Snow, Glacier, and Rock creeks.

They knew what they were about; they showed rare judgment in locating, and they took pains to comply with the law.

All of these claims were subsequently consolidated under the name of the Pioneer Mining Company of Seattle, and Mr. Lindeberg became the president of the company.

When the three prospectors returned to Council, in October, the news of the discovery soon spread, causing a rush.

A party was organized by the three Scandinavians and three others, who went to the mouth of the Snake river and organized the Cape Nome mining district.

The whole country was soon plastered with locations, most of them illegal.

The prospectors that had done the first gold mining in this region, the Seward peninsula, were chagrined to find that the three Scandinavians, comparatively inexperienced as they were, bad located the best claims; so they jumped the claims of Lindeberg and his partners on Anvil creek, and set an example that was followed at once by the crowd of newcomers.

Every claim was covered two or three deep with locations. Anarchy ensued, culminating in a disgraceful litigation, rendered long and costly by a gigantic conspiracy on the part of the local authorities established at Nome.

Never was the law worse prostituted by graft, and never did a man fight more courageously and fairly against big odds than Lindeberg on behalf of his ‘prospecting companionship.’

To the honor of American journalism be it said the Washington Post was instrumental in exposing the whole shameful story, causing the Senate to call for an investigation.

The Federal court at San Francisco, notably Judge Morrow, checked the outrage and prevented the robbery from being consummated while investigation was being made. The judge at Nome was dismissed and a great wrong righted.

Lindeberg came into his own, after a fight that had lasted three years. He proceeded to exploit the gold-bearing creek-bottoms in a miner-like way and organized a thoroughly efficient enterprise, which proved highly profitable.

It is still productive. And when he had made money Mr. Lindeberg did not forget his native place, Tromsii, but furnished funds for building schools, giving to his younger countrymen some of the educational advantages that he had been compelled to acquire as best he could during the rough and tumble of his great adventure.

This is the story of a recent day. The heroes of it are living and working still. It is a pleasant story, because it tells of wrong righted and of intelligence rewarded.

The ignorant. and the envious among their fellows exclaimed at the “stupid luck” of the gallant three, but it is a fact that they prospected on every claim that they staked, they worked diligently, and they ascertained where lay the richest ground before their locations were made.

They were wise also in studying the mining law before they started on their exploration, so that they knew how to comply with it in every detail when the time for action arrived.

They were strong men, as able to withstand the attack of unscrupulous foes as they were fit to face the hardships of a stern cold land.

Such are the true sons of the North, not the dissolute weaklings or the unhappy misfits of a material civilization but the men with the heart of a Viking and the faith of a child, to whom the call of adventure is as the voice that the caribou bears in the spring.

Every young miner hears that call.

The California Fractional Gold Coin shows beside a full-length portrait of Jafet Lindeberg, circa 1900. 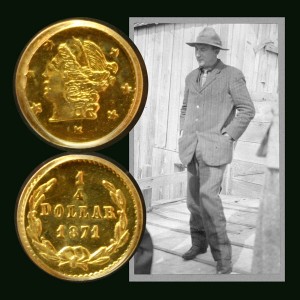