Today, the Maryland and Pennsylvania State Quarter Coins remember when The Magnetic Telegraph Company completed their route on June 5, 1846 between Philadelphia and Baltimore.

From the Chapters of Telegraph History, Furnished by the American Telegraph Magazine and Other Publications, published in 1861:

“The” Magnetic Telegraph Company—Anniversary of its Line.

This is the broad name of a Company with a short but profitable Line—its route extending between New-York, Philadelphia, Baltimore, and Washington.

As it is a sort of bridge or tollgate for a large share of business passing to and from extensive regions, it receives more than ordinary profit from this consideration, aside from the local business of the cities which it aids in connecting—(for it has a competitor in the House Line between those cities.)

This Magnetic Telegraph Company’s Line was one of the Pioneers in the American Telegraph System.

In looking among the “Antiquities of Telegraphic History,” we find the following notice of the completion of the Line in a New York Empress some seven years old:

“The Telegraph between this City and Philadelphia (completing the whole line between New York and Washington) was again in successful operation today. It worked to a charm. Soon after the first intimation was given, the following note was transferred and immediately sent through to Washington:

“ ‘Henry 0’Rielly congratulates Professor Morse on the completion of the Telegraph, and on the connection of the Hudson and Potomac by links of lightning.’

“ In five minutes after, the following note was received in Philadelphia, and responded to that it was all O.K.:

“ ‘Professor Morse congratulates Mr. O’Rielly on the success of his labors.’

” ‘A number of other communications were sent backwards and forwards, all proving the completeness with which the Telegraph works.”

The Magnetic Telegraph Company is now under the efficient Presidency of William M.Swain, of the Philadelphia Ledger, who was one of the first subscribers that aided Mr. O’Rielly with means for constructing the section between Philadelphia and Baltimore.

Few men have bestowed as much thought, or have as correct appreciation of the “proprieties” of Telegraphing, as Mr. Swain.

This Line has always remunerated its stockholders with handsome dividends.

In those “ancient days,” the New York Herald, after complimenting “the Telegraph Line between Baltimore and Philadelphia,” congratulated the public on the fact that, when the line should be completed between New York and Boston, “the United States Government will receive the spirit of the foreign news, brought by each steamer to Boston, before the vessel will touch the dock.”

In the short period since then (just seven years) more than twenty thousand miles of Telegraph have been constructed by private enterprise, without aid from the Government; and the Government experiences the benefit of almost instantaneous communication over those vast distances, as fully as it was then hoped it would realize such an advantage “between Washington and Boston.”

To the Magnetic Telegraph.

“Harp of a thousand strings!”
Swept by a mightier minstrel than the wind,
A viewless spirit, whose unfettered wings
Leave all, save thought, behind:

Outvying in its flight
The fleeting footsteps of the panting steed,
The arrowy keel that cleaves the billows bright,
Or the fierce engine’s speed:

Thine is the magic spell,
With deepest tones the human heart to throb;
The power outvying feeble speech, to tell
Tidings of good or ill.

Thou who dost herald on
To the vast inland, stretching far and wide,
Tales from the ships, whose moorings yet unwon
Must still the wild waves ride:

Telling of kings and thrones,
A nation’s downfall, or an empire’s birth—
Revealing in thy weird and mystic tones,
Strange histories of Earth—

Of famine, fire, and flood,
The fearful earthquake, or the whirlwind’s breath,
The ocean tempest, or the field of blood,
The pestilence, and death:

Or tidings sweet and dear,
The blissful messages of love and peace,
To waiting hearts that yearn from thee to hear
Hope, joy, return, release:

Thou who shalt link all lands,
Thou who at last shalt span the stormy sea,
Binding the nations into brother-bands—
What shall we sing of thee?

The earth whereon we tread.
The mighty billows rolling over thee,
The lightning’s flash, the sky, the clouds o’erspread,
Shall yet thy minstrels be.

Thou messenger of mind!
Thy triple chords shall make the electric zone
Which heart to heart, as shore to shore, shall bind,
When space shall be unknown!

The Maryland and Pennsylvania State Quarter Coins show with an image of Samuel F. B. Morse, circa 1850, standing with his left hand resting on early telegraph equipment. 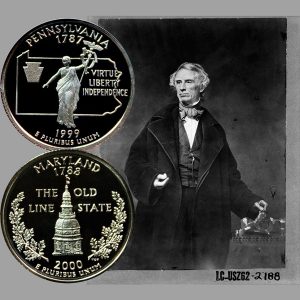