Today, the Oregon State Quarter Coin remembers when John C. Fremont wrote in his journal on October 25, 1843 of his expedition and seeing the Columbia river for the first time.

From the Memoirs of My Life by John Charles Fremont, published in 1887:

October 25th.—The weather was pleasant, with a sunrise temperature of 36°. Our road today had in it nothing of interest; and the country offered to the eye only a sandy, undulating plain, through which a scantily timbered river takes its course.

We halted about three miles above the mouth, on account of grass: and the next morning arrived at the Nez Percé Fort, one of the trading establishments of the Hudson Bay Company, a few hundred yards above the junction of the Walahwalah with the Columbia River. Here we had the first view of this river, and found it about one thousand two hundred yards wide, and presenting the appearance of a fine navigable stream.

We made our camp in a little grove of willows on the Walahwalah, which are the only trees to be seen in the neighborhood; but were obliged to send the animals back to the encampment we had left, as there was scarcely a blade of grass to be found. The post is on the bank of the Columbia, on a plain of bare sands, from which the air was literally filled with clouds of dust and sand during one of the few days we remained here—this place being one of the several points on the river which are distinguished for prevailing high winds, which come from the sea. The appearance of the post and country was without interest, except that we here saw, for the first time, the great river on which the course of events for the last half-century has been directing attention and conferring historical fame.

The river is, indeed, a noble object, and has here attained its full magnitude. About nine miles above, and in sight from the heights about the post, is the junction of the two great forks which constitute the main stream —that on which we had been travelling from Fort Hall, and known by the names of Lewis’ Fork, Shoshonee, and Snake River; and the North Fork, which has retained the name of Columbia, as being the main stream.

We did not go up to the junction, being pressed for time; but the union of two large streams, coming, one from the southeast and the other from the northeast, and meeting in what may be treated as the geographical centre of the Oregon Valley, thence doubling the volume of water to the ocean while opening two great lines of communication with the interior continent, constitutes a feature in the map of the country which cannot be overlooked; and it was probably in reference to this junction of waters and these lines of communication that this post was established. They are important lines, and, from the structure of the country, must forever remain so—one of them leading to the South Pass and to the valley of the Mississippi, the other to the pass at the head of the Athabasca River and to the countries drained by the waters of the Hudson Bay.

The British fur companies now use both lines; the Americans, in their emigration to Oregon, have begun to follow the one which leads toward the United States. Bateaus from tide-water ascend to the junction, and thence high up the North Fork, or Columbia. Land conveyance only is used upon the line of Lewis’ Fork. To the emigrants to Oregon the Nez Percé is a point of interest, as being, to those who choose it, the termination of their overland journey. The broad expanse of the river here invites them to embark on its bosom; and the lofty trees of the forest furnish the means of doing so.

From the South Pass to this place is about one thousand miles; and as it is about the same distance from that Pass to the Missouri River at the mouth of the Kansas, it may be assumed that two thousand miles is the necessary land travel in crossing from the United States to the Pacific Ocean on this line. From the mouth of the Great Platte it would be about one hundred miles less.

Mr. McKinley, the commander of the post, received us with great civility; and both to myself, and the heads of the emigrants who were there at the time, extended his hospitality in a comfortable dinner to which he invited us.

By a meridional altitude of the sun, the only observation that the weather permitted us to obtain, the mouth of the Walahwalah River is in latitude 46° 03’ 46”; and, by the road we had travelled, six hundred and twelve miles from Fort Hall.

At the time of our arrival, a considerable body of the emigrants, under the direction of Mr. Applegate, a man of considerable resolution and energy, had nearly completed the building of a number of Mackinaw boats, in which they proposed to continue their further voyage down the Columbia.

I had seen, in descending the Walahwalah River, a fine drove of several hundred cattle, which they had exchanged for Californian cattle, to be received at Vancouver, and which are considered a very inferior breed. The other portion of the emigration had preferred to complete their journey by land along the banks of the Columbia, taking their stock and wagons with them.

Having reinforced our animals with eight fresh horses, hired from the post, and increased our stock of provisions with dried salmon, potatoes, and a little beef, we resumed our journey down the left bank of the Columbia, being guided on our road by an intelligent Indian boy, whom I had engaged to accompany us as far as the Dalles.

The sketch of a rock which we passed in the course of the morning is annexed, to show the manner in which the basaltic rock, which constitutes the geological formation of the Columbia Valley, now presents itself. From an elevated point over which the road led, we obtained another far view of Mount Hood, one hundred and fifty miles distant. We obtained on the river bank an observation of the sun at noon, which gave for the latitude 45° 58’ 08”.

The country today was very unprepossessing, and our road bad; and as we toiled slowly along through deep loose sands, and over fragments of black volcanic rock, our laborious travelling was strongly contrasted with the rapid progress of Mr. Applegate’s fleet of boats, which suddenly came gliding swiftly down the broad river, which here chanced to be tranquil and smooth. At evening we encamped on the river bank, where there was very little grass, and less timber. We frequently met Indians on the road, and they were collected at every favorable spot along the river.

The Oregon State Quarter Coin shows with the columns of basalt rock Fremont saw on his expedition in the Columbia valley. 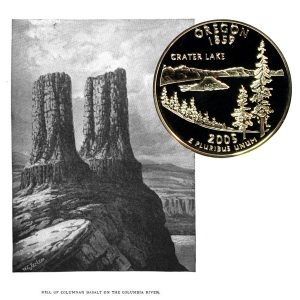