Today, the Congress Commemorative Gold Five-Dollar Coin remembers when the legislative branch of government gained a quorum and met for the first time in the new capital city on November 21, 1800.

From the National Magazine, An Illustrated American Monthly, of November 1914, an excerpt of an article by Frederick L. Fishback, titled Permanent Seat of Our Government:

The first Congress elected under our present Constitution began its sessions in New York March 4, 1789, and George Washington took his oath of office as President there on April 30, 1789.

The second session of the First Congress and the last session of Congress held in New York, convened January 4, 1790, and adjourned August 12, 1790, and on the thirtieth of that month President Washington set out for Virginia.

On December 6, 1790, the third session of the First Congress convened in Philadelphia, which had been determined upon in the Act of July 16, 1790, as the temporary seat of government.

On Saturday, November 28, 1790, the President and Mrs. Washington arrived and took possession of their new mansion in that city.

During the decade that Philadelphia was the temporary capital, that city was visited by three scourges of yellow fever. The first was in 1793.

During this pestilence of 1793, President Washington and the officers of the general government moved to Germantown, then six miles from the city, but since 1854 an incorporated part of it.

The other yellow fever epidemics during the ten years that the seat of government was in Philadelphia occurred in 1797 and 1798.

George Washington took his oath of office as President the second time in 1793, in Philadelphia, in the building which stands at the corner of Sixth and Chestnut Streets.

At this place also John Adams became President in 1797.

This building, west of Independence Hall and connected with it by a colonnade, had been erected since the Continental Congress left Philadelphia in 1783, and was used by Congress and the Executive, while the structure at the corner of Fifth and Chestnut Streets, east of Independence Hall and similarly connected with it, was occupied by the United States Supreme Court.

The first session of the Sixth Congress adjourned in Philadelphia May 14, 1800, having, by an Act approved the previous day, directed that the short or second session should begin in Washington November 17, 1800.

A quorum of both Senate and House was not present in Washington, however, until November 21, 1800, which may therefore be considered as the day on which the legislative branch ‘of the government was established in Washington.

The Supreme Court assembled in Washington February 2, 1801, but a majority of its members was not present until February 4, on which day John Marshall, the great expounder of the Constitution, who had received his commission from President Adams a few days earlier, viz., January 31, 1801, qualified as Chief Justice.

The removal of the Executive Departments of the government from Philadelphia to Washington was completed by June 14, 1800.

President John Adams arrived at the permanent capital on the fourth of that month.

The President’s House, as what is called the White House was styled in the early days, was not yet ready for occupancy, and the few days he was in the city that summer he spent at Tunnicliff’s Tavern.

President Adams returned to Washington in November, 1800, and the President’s House, although far from being finished, was first occupied by him and Mrs. Adams at that time.

Complete legal jurisdiction over the District of Columbia and of the people residing therein was taken over from Maryland and Virginia and assumed by Congress on February 27, 1801.

When the government was moved to Washington in 1800 it was far from being a satisfactory place of residence. The city was laid out in the wilderness.

They “took to the woods” for a Capital City. It was the first time that a government had actually gone into the wilds and selected a site for a capital and laid out its city on a well-defined plan.

As beautiful as we consider Washington today, the Minister from Portugal, the Abbe Corea, who was considered one of the greatest wits of his time and who in 1816 called it “The City of Magnificent Distances,” so named it purely in derision.

In that day there was little but distance in the city.

As late as 1842, Charles Dickens, after his visit, wrote that “Its streets begin in nothing and lead nowhere.”

He laughs best who laughs last, however, and now as we stand at the Capitol and look off for miles upon the broad and smoothly paved streets and avenues, we may smile at the jesting Portuguese and thank him for giving the city the name which fits it so perfectly today.

Truly it is “The City of Magnificent Distances.”

The Congress Commemorative Gold Five-Dollar Coin shows with an artist’s image of the capitol, circa 1806. 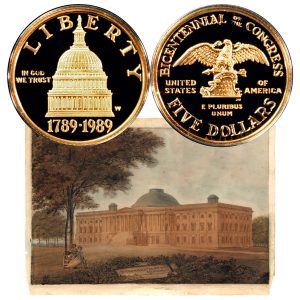