Today, the Colorado State Quarter Coin remembers when the striking miners attacked the sheriff and his posse on December 12, 1891.

Mad Italians and Austrians Fire on a Sheriff’s Posse in Colorado.

The Officers Return the Hot Compliment and Kill Half a Dozen.

Denver, Co., Dec. 12.— The strike of the miners at the mines of the Colorado Coal and Iron company at Crested Butte, has resulted much more seriously than was at first anticipated, and there are yet indications of further bloodshed before the matter is settled.

About two weeks ago 500 Austrian and Italian miners, employed at these works, went out on a strike because of a proposed reduction of wages announced by the company.

Since the men went out they have been very ugly, refusing to allow the company to bring in new men, have stopped the pumps and fans at the works, allowing them to fill with gas until there is danger of the mines blowing up, and have paraded the streets heavily armed, threatening death to anyone who should attempt to assist the company in any manner.

Yesterday Sheriff Shores, of Gunnison, arrived there with a posse of twenty-five men for the purpose of taking possession and guarding the mines.

No sooner had the sheriff and his men alighted from the train when they were attacked by about 200 armed Sicilians and Austrians, who began firing with their Winchester rifles.

The officer held his men for a moment and then ordered them to return the fire, which they did with deadly effect, killing five Italians. Two Austrians were fatally wounded.

After the firing the miners retreated and the sheriff’s posse marched up the hill and took possession of the mines and threw up redoubts.

The sheriff and his posse are now in possession of the town, and are entrenching themselves at the mines in order to resist an attack, which is expected tonight.

The Italian miners are furious over their repulse, and are swearing revenge upon everyone connected with the Colorado Coal and Iron company, or engaged in enforcing the law in protecting the property of the company.

This evening no one will venture beyond the redoubts, which have been hastily constructed for fear that a chance shot may find a mark.

Treachery and Ambush are apprehended more than open assault.

All of the strikers are armed and more weapons are being distributed throughout the camps which they occupy.

No one seems to know where the war equipment of the Italians comes from, and the conviction is forced that a combination against capital has been secretly organized during the past few months just to meet an emergency of this character.

The last strike at this point was settled by arbitration, without recourse to violent measures, and the understanding at the time was that a permanent settlement of all the trouble had been effected.

They were not then prepared for resistance, and the current opinion is that the leaders ordered a suspension of hostilities so they could prepare for this one, and become master of the situation.

The struggle is on, and the conflict started by the belligerent miners has already resulted in the disastrous consequences outlined above.

Even worse is anticipated this evening, and while everyone has confidence in the sheriff, there are few who think he can stand out against the overwhelming forces of the strikers.

Arson, pillage and rapine will ensue if the sheriff is beaten off from the coal companies’ property. Every man in town not identified with the strikers is being sworn in and supplied with ammunition.

The Denver & Rio Grande railroad company, in expectation of the incendiary torch, has removed all its equipments and rolling stock from Crested Butte, and all traffic will be suspended until the trouble is over.

Tonight will bring the crisis, but as the sheriff is fortified the critical moment may pass in peace. In the event of an attack, hundreds will be killed, as the orders are, “shoot to kill.”

The governor seems to be of the opinion that he will not be called upon to support the sheriff with the state militia, though Adjt. Gen. Kennedy says that an hour’s notice is all that is necessary to get a move on the state troops if required.

The governor has notified the Italian consul officially of the situation at Crested Butte, and has requested him to go down and call his countrymen off before the situation becomes more grave.

Gunneson, Co., Dec. 12.— A party is organized here and ready to start for Crested Butte when called upon.

Their guns are stacked in a hardware store here, and upon a signal from the fire bell the party will march to the scene of the riots.

The Colorado State Quarter Coin shows with an image of a coal mine tipple, circa 1923. 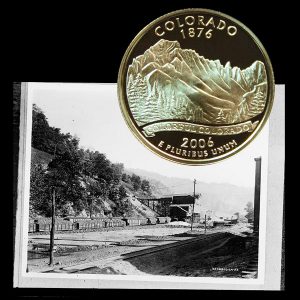