Or, perhaps she should be called the “Grand Old Lady.” 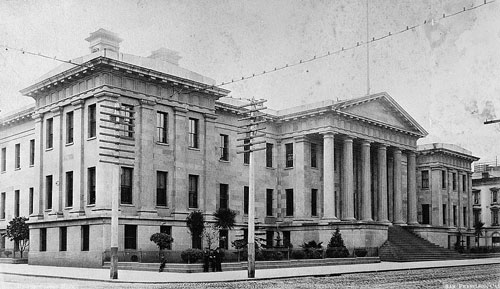 The US Mint’s first branch opened in San Francisco in 1854, however due to the gold and silver mining in the western part of the country, the branch mint quickly outgrew its first location. Initial contracts for the new location were signed on November 27, 1869, and the ceremonial cornerstone laid on May 26, 1870.  To honor the occasion, the cornerstone included a copper casket with coins, newspapers, photographs and other items pertinent to the mint and to the times.

In that era, the building cost over $2 million with the Supervising Architect, A. B. Mullet, saying, “No ornamentation has been attempted, but dependence placed on the magnitude and proportion of the building for its architectural effect. No pains have been spared to make it, when complete, not only the finest and best constructed building on the Pacific coast, but the best arranged mint in the world.”

However, considering the Grand Old Lady withstood not only the earthquake of 1906, but also the resulting fires, the price tag certainly seems justified. Her construction along with seven hours of effort by mint employees and soldiers using a small one inch hose saved the building and the $200,000,000 located in her vaults. 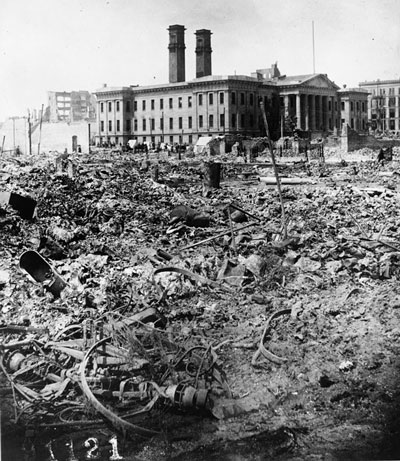 She served the country as a mint and as a storage facility from when she opened in 1874 to 1937. Within three years of opening, the Old Mint location was generating $50 million in coinage per year. Plus, in 1934, the Old Mint’s vaults held one third of the nation’s gold reserves.

After the new San Francisco Mint opened in 1938, the Grand Old Lady housed government offices for both federal and state workers. In August 1958, Kenneth H. Cardwell, Architect, submitted these comments about the architecture of the Old Mint:

“The building is a rectangular structure with a narrow internal court, with four corner pavilions and a Doric hexastyle portico. The pavilions, with slightly raking parapets, are given emphasis by flat pilasters under a Doric frieze. It is two full stories in height with a lofty basement which places the main floor some 12 feet above street level. This is a powerful effect of contrast between the block corner elements and the pair of square brick chimneys 130 feet high that rise in the rear and were used in connection with the refining of ore. The building is, in general, in a good state of repair except for the cornice which has deteriorated and has been partially removed allowing moisture to cause spalling of some of the face stone.

“The building is approximately 160 feet by 217 feet with brick masonry walls face with a Rocklin California granite base and blue-gray sandstone upper stories. The interior has cast iron columns supporting wrought girders, said to be imported from Philadelphia. These in turn carry the floors on shallow brick arches ‘finished in cement.’ In the attic iron girders support the roof, most of which is of galvanized and corrugated iron and a small part of copper sheathed wood.

“The interior woodwork is mostly golden mahogany. The windows are fitted with interior iron shutters which fold open against the window reveals.

“The building is located in an area of commercial San Francisco which is due for redevelopment. Such a building of the historic past could do much to add scale and permanence to the design of any urban development in this area of the city.”

This proof silver dollar shows she is a Grand Old Granite Lady.

You can find more information and more pictures at these sites:

US Mint Buildings Across the Nation

Library of Congress Pictures and Drawings of the Old San Francisco Mint which includes pictures of the various rooms such as the Assayer’s Office, the Coining Room, the Refinery, the Adjustment Room and others.