Today, the Shield Nickel Five-Cent Coin remembers the meeting of Mr. Stanley and Dr. Livingstone with an article printed in the Harper’s Weekly of July 27, 1872.

The grand triumph of the New York Herald expedition of search after the renowned Dr. Livingstone in Equatorial Africa is known the world over, and is everywhere the subject of heartiest rejoicing.

There can no longer be any question about the safety of the great explorer. He is known to be alive, and still hopefully following out the great purpose of his mission.

The narrative of the journey inland, a thousand miles over desert, jungle, jagged mountain path, and sodden valley trail, in the midst of brutal savage tribes, is a thrilling one, and cannot fail to impress the reader with the heroism of the man who led the search.

The triumphal entry of the Stanley expedition into Ujiji, where Livingstone was found, has been briefly described in telegraphic dispatches from the other side of the ocean.

As the party approached the place the pagazis who chanced to be unladen preceded, beating drums and blowing upon koodoo horns.

The armed escort fired salutes every moment, keeping up a regular feu de joie, and the American flag floated proudly over all.

In the distance lay the silver bosom of Tanganyika Lake, at the foot of the stately mountains in the background, and fringed with tall trees and lovely verdure.

It was a wonderful relief to the pilgrims of progress. Before them lay the settlement or town of Ujiji, with its huts and houses, looking dreamily like a land of rest.

The astonished natives turned out at the unwonted display, and flocked in crowds to meet them with deafening shouts and beating of drums.

Among the advancing throng was noticed a muscular group of turbaned Arabs. As they advanced still nearer, one of the group, who walked in the centre, was seen to be differently attired from the others.

The group halted, and the word was passed back that a muzany was among them.

Spurring forward the Herald commander indeed saw that, strongly contrasting with the dusky, sunburned Arab faces, was a hale-looking, gray-bearded white man, wearing a navy cap with a faded gold band, and a red woolen jacket.

It was a trying moment, wherein every emotion of hope and fear flashed through the brain. The fatigue was forgotten in the intensity of the situation.

The questions, Was this he who had so long been sought? or Could it be a delusion of the mind? or Was the white man some unknown waif of humanity? crowded the mind, bringing their changing feelings with them.

A few feet in front of the group the Herald commander halted, dismounted, and advanced on foot.

Preserving a calmness of exterior before the Arabs which was hard to simulate, as he reached the group Mr. Stanley said, “Doctor Livingstone, I presume?”

A smile lit up the features of the hale white man as he answered, “Yes, that is my name.”

The meeting was most cordial, and the wearied caravan, joyous at the triumph of the expedition, were escorted by the multitude to the town.

After a rest and a meal, in which milk, honey, and fish from Tanganyika were new features, Livingstone told his story, which is in brief as follows:

In March, 1866—he informed the Herald explorer—he started with twelve Sepoys, nine Johanna men, and seven liberated slaves. He traveled up the Rovuma River.

Before they had been gone very long the men became frightened at the nature of the journey, and the reports of hostile tribes up the country they were to pass through.

At length they deserted him, and, as a cover to their cowardice in doing so, circulated the report of his death.

Livingstone proceeded on his journey in spite of the isolation, and after some difficult marching reached the Chambezi River, which he crossed.

He found that this was not the Portuguese Zambezi River, as had been conjectured, but, on the contrary, wholly separate.

He traced its course, and found it called, further on, the Lualaba.

He continued his explorations along its banks for 700 miles, and has become convinced in consequence that the Chambezi is the true source of the Nile, and that this will make a total length for the mystic river of Africa of 2600 miles.

His explorations also establish the fact that the Nile is not supplied by Lake Tanganyika. He reached within 180 miles of the source, and explored the surrounding ground, when, finding himself without supplies, he was obliged to return to Ujiji, and was in a state of destitution there when met by the commander of the Herald expedition.

On the 16th of October, 1871, the two explorers left Ujiji, and arrived at Unyanyembe toward the end of November, where they passed twenty eight days together exploring the district.

They then returned and spent Christmas together at Ujiji.

The Herald explorer forwarded this important and interesting intelligence on the 14th of March, 1872, leaving Livingstone at Unyanyembe.

Livingstone will explore the north shore of Tanganyika Lake, and the remaining 180 miles of the Lualaba River.

This Herculean task he expects will occupy the next two years.

The portrait of the great explorer, and the map showing the region of his travels given on this page, will be studied with interest.

Mr. Henry M. Stanley, the leader of the Herald expedition, whose portrait is given below, is a native of Missouri, and, “raised” in the border wilderness, enjoyed comparatively scanty educational advantages.

His parents died while he was still very young, and he found himself, about the middle of the war, a youth of eighteen, with a small patrimony yielding a modest annual income, but without calling or profession.

He had, however, the ambition and industry that are our most conspicuous national characteristics, and looking about for a field in which to distinguish himself, he drifted East and became a war correspondent of the Herald.

His chief recommendation at this time was his energy and industry and fearlessness in collecting facts, not the style in which he told them; for although he had previously shown some indications of literary ability, and had occasionally found a place in the poet’s corner of obscure country papers, his pen was as yet neither practiced nor fluent.

During the war he succeeded in doing his duty, and established a steady but not very brilliant reputation.

About a year after the surrender he temporarily left the journal with which his name has since become so closely associated.

In 1866 or the early part of 1867 he determined to go to Europe and enlist in the Cretan army as a volunteer, making arrangements before leaving New York to send occasional letters to the Herald.

He was, however, greatly disappointed in the character of his intended companions in arms, and soon changed his plans.

He then, in company with three traveling compatriots, one of whom was his step-brother, arranged for a walking tour through the heart of Asia, passing through Asia Minor, the provinces of Russian Asia, the Khanates, Bokhara and Khiva, Eastern Turkestan, and so through China to the coast .

This project, however, came to a disastrous end. The little party had penetrated only a hundred miles from Smyrna when it was plundered by brigands and compelled to return.

The next year Mr. Stanley spent in traveling about Europe.

In 1868 he accompanied the Abyssinian expedition to Magdala, and contrived on several occasions to get important news through to New York ahead of the dispatches of the British government and of the rival correspondents.

These successes, of course, strongly recommended him to the favor of his journal, and when the Herald determined upon its quest of the great explorer, Mr. Stanley was selected to head the expedition.

Mr. Stanley is now about twenty-nine years of age. He is a thickset, powerful man, though, like William the Conqueror and other celebrated people, he is short in stature—only about five feet seven inches.

A sure shot, an expert swimmer, a practiced horseman, and a trained athlete, with a very wide and varied experience of “roughing it,” he was admirably fitted for the duty he has so gallantly and successfully performed.

A dispatch from Aden announces the arrival there of Mr. Stanley, and saying that he would leave July 11 for London, in company with the son of Dr. Livingstone.

Mr. Stanley is the bearer of letters from the great explorer for the British government, as well as for the family and friends of the long-absent Livingstone.

Mr. Stanley states that when he left the interior of Africa Dr. Livingstone was unwell, but he was, nevertheless, determined to proceed with his explorations, and will not return home until he has completed the great work of ascertaining the source of the Nile.

The Shield Nickel Five-Cent Coin shows with images of the African map and artists’ portraits of Dr. Livingstone and Mr. Stanley. 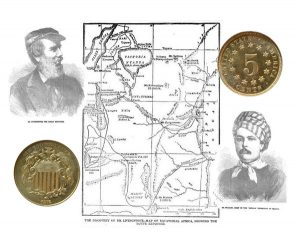