Today, the Colorado State Quarter Coin remembers the first day of passengers aboard the new train from Manitou to Pike’s Peak 125 years ago.

The Pike’s Peak Railway is now in successful operation.

The first passenger train reached the summit at 5:25 this afternoon.

The train consisted of an engine and one car, occupied by sixty-five people, mostly excursionists from Denver.

There is a double track rail in the center of the track, the track is standard gauge, steel rails, and fifteen feet roadbed.

The road is operated on the Abt system.

The road is constructed in the most thorough manner, and every precaution for the safety of the passengers is used.

On the way up a slight snow squall was encountered, and on the summit the air was unpleasantly cool, even with heavy overcoats.

No incident occurred to mar the success of the opening trip.

It operates by cogwheels alone, there being no adhesion drivers.

The cogwheels, two in number, are placed directly over the center of the track, in such a position that they gain the advantage of the weight of the engine.

The rear of the locomotive is elevated so that the boiler will be nearly level when on the heaviest grades.

The two tanks on each side of the boiler carry the water supply, there being no tender, and sufficient coal for one round trip is carried in a coal-box in the rear of the cab.

As the engine pushes the train up hill, instead of pulling, as in ordinary railroad trains, it has no use for a pilot or “cow-catcher,” and resembles in hardly any respect the ordinary locomotive.

The passenger coaches do not differ materially from the ordinary Pullman coach, but are constructed so that passengers may sit comfortably in a horizontal position when the car is on an incline.

This is the most novel as well as the highest railroad in the world.

Earlier in the year, the Scientific American, published an article describing the new railway and its construction:

THE MANITOU AND PIKE’S PEAK RAILWAY. BY FRED. R. HASTING.

When Zebulon Pike, with his small band of followers, pierced the trackless waste in 1806 and gazed upon the mountain which bears his name, he little dreamed that in future years the ingenuity and enterprise of man would surmount the obstacles of nature, and the same century would see the steel bands of a railway laid up the ascent and a ponderous locomotive hauling its precious load of human freight from the base to the summit.

The Manitou and Pike’s Peak Railway is now a reality. The trial trip over the entire line was made October 20 last, and subsequent operation by passenger trains over a large portion of the road has proved the full success of the undertaking.

The attempt so successfully carried out to construct a railway up the peak was not the first one.

Seven years ago many thousand dollars were sunk in a futile attempt.

The plan was to gain the summit by a light grade and smooth rails, which necessitated a much longer route.

Several miles of the grading were completed, when the plan was abandoned.

The roadbed, crossing as it did so many waterways, was continually threatened with washouts.

But the failures of the first company have only aided to pilot the present projectors to a wiser course.

Major John Hulbert, the president of the road, was the first to conceive the proper mode of construction, and he succeeded in interesting a number of railroad officials, whose roads, either by direct or indirect connection, would profit by a line to the summit of the peak.

A stock company was soon formed, surveys made, and the contract for the work let.

Mr. T. F. Richardson is the chief engineer of the work, and superintended the entire construction from the time of the first surveys until its completion.

Mr. Z. G. Simmons, of Kenosha, Wis., was the general contractor, with B. Lantry & Sons, of Topeka, Kan., subcontractors for the grading.

When the construction of the roadbed began, eight hundred men and one hundred and fifty horses and mules were put in service.

All provisions, tools, and camping outfits were transported by trail to the various camps along the line on the backs of mules and burros.

Only those familiar with the Rocky Mountain region can form an adequate conception of the difficulty of the undertaking.

The precipitous cliff of solid granite, the deep cannons and ravines, the vast, deep fields of snow, seem obstacles set by Nature never to be surmounted by man.

The road is operated by the Abt cogwheel system.

The maximum degree of curvature is 16, or a curve with a radius of 359 feet.

The length of the road is a few feet less than nine miles, of which two and three- quarters miles are above timber line.

The roadbed is 15 feet wide, increased to 20 and 22 feet through cuts, thus giving protection, in case of derailment, from more serious accident.

No trestle work is used on the entire line.

All bridges are built of iron, and were constructed by the Edgemoor Bridge Works, of Wilmington, Del.

The culverts are built of solid masonry and placed wherever necessary to guard against washouts.

The road is standard gauge.

The T-rails weigh 40 pounds per yard, and are laid on red spruce ties, 9 feet long.

The rack-rail is laid in the center between the T-rails, and consists of two continuous rails made up of parallel bars, each 80 inches long, of soft Bessemer steel, held in position by means of die-forged steel chairs, which are secured to the ties by wood screws.

The parallel bars are set 1 5/8 inches apart, each containing seventeen teeth or cogs in their length, in which the pinions of the engines interlock 1 1/4 inches.

The chairs are set 40 inches apart, each bar being doubly bolted to three chairs, in the middle and at either end.

The bolt holes in the middle of the bars are of the same size as the bolts, while those at either end are drilled three- eightieths inch larger, to allow for expansion of the bars.

On account of the steepness of the grade and consequent tendency of the track to slide, both by its own constant weight as well as that of passing trains, also from expansion and contraction due to varying temperature, a very thorough system of anchorage has been carried out.

In the entire length of the road 146 anchors are used, varying in distance one from another from 200 to 600 feet, according to the steepness of the grade, and are of two kinds.

In some instances a pair of steel straps are secured to one of the chairs, brought forward as a clevis, and attached by means of a coupling adjustable in length to a turned pin, 2 1/2 inches in diameter and 2 feet long, which is leaded into the solid rock.

In the absence of a ledge of rock, a steel bar is set at the lower side of a tie, and from this an oak timber of cross section 10 inches by 10 inches, and from 10 to 14 feet long, is carried downward at a steeper angle than the grade of the road, and thrusts either against a heavy oak timber embedded in the ballast at right angles to the first timber or against rock.

The engines, three in number, were built by the Baldwin Locomotive Works, of Philadelphia, and present a very different appearance from the ordinary locomotive.

Each engine weighs 26 tons, and is capable of carrying two coaches.

There is no tender, the water being carried in two saddle tanks of a capacity of 600 gallons on either side of the engine, while a box at the rear carries 1 1/4 tons of coal, sufficient for one round trip.

There are three water stations on the route, besides the one at the lower station.

The cylinders of the engine are 17 inches by 20 inches.

The boiler has a 42 inch shell, and the flues are 7 feet long.

The engines have 200 horse power, and are built to stand level on a 16 percent grade.

There are three sets of double pinion brakes on each engine.

The power is transmitted by a main drum, which has teeth similar to the pinions, and works on the two back sets of pinions, the forward set of pinions being driven by rod connection with the middle set.

The two back sets, which are connected with the main drum, furnish most of the power for ascending the forward set of pinions being principally to apply brake power.

In descending, the cylinders of the engine are used as air compressors, a stream of water being kept running into them continually to keep them from heating.

By controlling this compressed air, the speed of the train is regulated.

In addition, the two front sets of pinions have a peculiar steam brake connection which locks them instantly.

The back pinion has a hand brake connection which is capable of stopping the whole train in a few seconds time on heaviest grade.

Each car has two axles, each of which carries a pinion brake worked by hand from either end of the car, either one of which is capable of holding the whole train.

A brakeman is stationed at each brake daring the operation.

The cars, built by the Mason Manufacturing-Works, of Springfield, Mass., are 43 feet long, 8 1/2 feet wide, and have a seating capacity of fifty people.

The floors of the cars are 24 inches above the top of the rails.

The sides and ends of the cars are of glass as far as possible, so as to give free observation without.

The woodwork within is handsomely finished, and the upholstering of old gold plush.

The seats are designed to set level on the average grade of 16 percent.

The cars are pushed, not drawn, by the engines, and are not coupled to the engine, but have simply buffers to keep them apart.

The car platforms have gates, which are locked while the train is in motion.

The trip from Manitou to the summit occupies an hour and forty-five minutes.

The trip down will take half an hour less time.

The minimum speed of the train is three miles per hour, and the maximum eight miles.

The expense of constructing the entire road was about half a million of dollars.

The company have ceased to operate regular trains for the winter.

During the few weeks of the fall when regular trains were run as far as the Half Way House, many people were carried over the line.

The road will be open for the summer season about June 1 this year.

The Colorado State Quarter Coin shows with an image of the cog wheel train, Manitou and Pike’s Peak Railway, circa 1900. 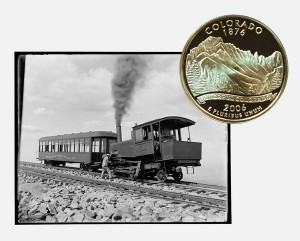