In April 1950, the Pittsburgh Post-Gazette published an article outlining the events from their archives:

One hundred and five years ago some weary, besmudged newspaperman sat down and wrote that headline. The one hundred fifth anniversary of the Great Pittsburgh Fire passed yesterday—unnoticed and unthought of by most.

Here is the way the newspaper reporter on the Gazette started his story and also some excerpts:

“At 6 p.m. Thursday evening, we sat down to our desk with a sad heart, to record the most dreadful calamity which befell any city the size of Pittsburgh. While we now write, an awful fire is raging, consuming the fairest portion of our city and no human being can tell where it will stay its ravages. It has now been burning for six hours and confusion reigns extreme…

“The fire broke out about 12 o’clock noon in an old frame shed on the east side of Ferry Street, used, we believe, for a smoke house, immediately surrounded on two sides with old frame buildings. The weather was extremely dry and the wind high, almost a gale blowing from the west.”

Going back into the news archives of the Pittsburgh Gazette, on April 18, 1845, they published more observances of the fire damage:

Yesterday morning we walked around the Burnt District. The appearance of things is awful—nothing but an immense forest of walls and chimneys is visible and desolate heaps of brick and mortar.

The fierce fire licked every combustible clean up. Nothing that would burn escaped.

The Wharf was covered with Merchandise of every description, furniture, etc., and many piles, which were rolled out as it was thought beyond the reach of the flames, were consumed.

Of the Monongahela Bridge, nothing remains, but a long line of burnt timber across the river, between the naked piers, all over the hills piles of furniture, bedding, etc, are scattered.

Along the streets the only valuable things visible were safes which the Merchants took the precaution to haul out of their stores, and it was a prudent foresight, inasmuch as many of them proved of very little use.

Among the ruins, crowds of people from other parts of the city and the country were wandering and gazing upon the scene.

For ourselves, we, more than once were lost, and had to look around for some well-known landmark to fix the locality.

Incidents of the Fire

Soon after the fire got under headway, and the Globe Factory began to burn, the Third Presbyterian Church was in most imminent danger. The members of that denomination rallied around it, and by cutting away the end of the roof which projected over the wall next the fire, and covering the roof with wet cloths, succeeded in saving it. We saw clearly that the salvation of a dozen squares depended upon it, for had it caught, its immense steeple would have scattered clouds of fire over a considerable portion of the city which wholly escaped. The American Office was saved by throwing water up on the roof with buckets.

The block of buildings in which our office is located was saved by the efforts of the firemen in keeping the roofs wet, and particularly by a single hose from an Engine in Fourth street, which saved the Post Office, and so saved the block.

The rapidity with which the fire spread was most remarkable. The whole of South Ward, containing from seven to nine hundred houses, was consumed entirely in the space of two hours. From the time the fire reached this Ward, across Wood street, until it spread to every part of it covering about sixteen squares, there was scarce an interval of half an hour!

The Monongahela Bridge took fire at the North end, next to Pittsburgh, and the flames ran roaring and crackling through with railroad speed, and from the time the fire commenced, until it was prostrate in the river, only ten minutes elapsed!

The wind shifted at various times and created excessive dread in other parts of the city. All the stores along Market street, in the Diamond, Diamond alley and Fifth street, as well as along Wood were stripped and packed up, and so many of the goods moved as was possible. A gentleman doing business near the head of Liberty street, this side of the Canal, tells us he would cheerfully have given $1000, at one time, to have had an insurance from an office out of the city, on his stock of $25,000, although the fire had not then got to Diamond alley.

This is only a sample of the universal horror and dread which filled the city. At one time the wind blew due east, then south, then veered round toward the north. Such was the critical position of our offices and the block in which it is, that had the wind at one time veered to the northeast for one minute, it would had gone.

Amidst all the horror, distraction and confusion prevailing throughout the city, there was no unmanly fear or vain repinings manifested. The sufferers bore their calamities with manly firmness, and as soon as they had unavailingly tried to save their own property, they put forth their exertions to save their neighbor’s. At one time, when it was thought the whole city must go, there was no wildness apparent, no want of a dignified and manly bearing.

This conduct speaks volumes in praise of our citizens, and gives indications that their indomitable energies are not to be crushed.

It wasn’t a cow like in Chicago’s fire or an earthquake in San Francisco’s fire. Instead, it was a simple washerwoman going about her work of heating her kettle to wash clothes.

Between the dry conditions and the high winds, her fire quickly got out of control and spread rapidly.

The Pennsylvania State Quarter Coin shows against an 1846 painting titled View of the Great Fire of Pittsburgh by William Coventry Wall, a witness. 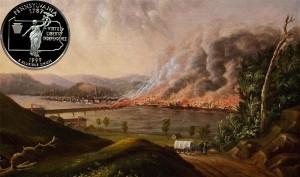