Today, the Lincoln Professional Life One Cent Coin remembers the first debate between Abraham Lincoln and Stephen Douglas on August 21, 1858 in Ottawa, Illinois.

From the Wheeling Daily Intelligencer newspaper of August 27, 1858:

Grand Passage-at-Gab between Douglas and Lincoln.

It was announced that Douglas and Lincoln, rival candidates for the U. S. Senatorship from Illinois, were to meet at Ottawa, face to face, and discuss the issue between them.

They had spoken and been speaking for some weeks back in different parts of the State, separate and apart from each other. But at Ottawa they were to close in with death holds upon each other.

The event was looked to with great interest, and seems to have been the topic of prominent interest with about every man, woman and child in the “Sucker State.”

Well, to Ottawa, at last, they came, on this day one week ago—armed and equipped to the teeth with all the old musty records, speeches, &c., &c., which each other had done and said since they stepped out of their swaddling clothes.

The people flocked in herds and crowds to the hustings—the reporters from Chicago came down like wolves on the fold, with their stencils and pencils sharpened to their keenest edge to report the arguments, personalities, “laughter,” “great laughter,” “cheers,” “immense applauses,” &c., which might be launched forth on the momentous occasion.

And so indeed they did. The Knights of the quill let themselves out in the most approved laxative style: to such an extent, we are sorry to say, as to preclude the slightest attempt on our part, to publish a tithe of what their respective champions said on the occasion.

We have read and looked over these speeches from one end to the other, which was no small effort, and we have come to the conclusion that the following summary, from one of our Cincinnati exchanges, will do just about as well as anything else, short of the speeches themselves.

Each champion succeeded very well in exposing the bad antecedents of the other.

Lincoln personally had the advantage of Douglas in preserving his temper. But the Lincoln organs are more radically out of a good humor than Douglas himself.

Douglas said that when he was a school teacher, Lincoln was a grocery keeper.

Lincoln, however, said that he never kept a grocery, but did once give his attention to a little stillhouse up at the head of a hollow.

To the surprise of the spectators, the honorable gentlemen got along without calling each other liars and getting into a scratch fight on the stand, but Douglas did nod his head when Lincoln asked him if he made a question of veracity between them.

The Lincoln papers say that Douglas was overwhelmed.

The Douglas papers say that Lincoln was so used up that his mouth hung open and he could not speak.

On the one hand it is asserted that Lincoln’s knees failed him so that he could not walk—on the other hand, that he was borne in triumph from the stage by a party who held him upon their shoulders.

The Chicago Press and Tribune says that after Lincoln’s speech, Douglas was furious—”We have never seen a human face so distorted with rage. He resembled a wild beast in looks and gesture, and a maniac in language and argument.”

That Douglas is formidable in debate is well known. His reply to Lincoln, when he poured out his concentrated rage in a speech limited to half an hour, was certainly hot and heavy.

The Chicago Times says that Lincoln several times attempted to interrupt Douglas, but was pulled down by the coat-tail by his friends.

There is one thing, however, that we especially observed all through the encounter between these two able rivals, and that was, that between them there is all the difference that usually separates a gentleman from a vulgarian.

A person would like to sympathize as much as possible with a man as sorely pressed as Douglas is—but the thorough conviction that will force itself upon the mind, is, that besides being a man of extraordinary powers, he is a vulgarian of the first water.

He is rough and uncouth, insulting and overbearing ad nauseam: so much so as to destroy almost all good feeling on his behalf.

On the other hand, Lincoln is a gentleman. The sheen of his spear is as bright as Douglas’ great broad sword. Yet, while he impales Douglas at every thrust, through and through, he does it with all the even flow of genial tone that marks the best specimens of classic oratory.

The man who goes out of his way to give the lie to as polite an antagonist—to as perfect a gentleman as Lincoln has demonstrated himself to be all through the campaign, evidences both that his cause is bad and that he himself is radically a bad style of man.

The Lincoln Professional Life One Cent Coin shows with an image of Abraham Lincoln, circa 1858. 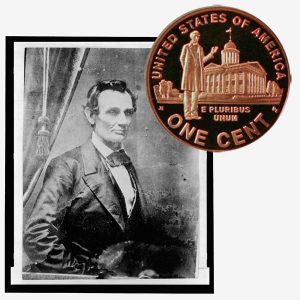