Today, the Montana State Quarter Coin remembers when the steamer Key West reached the Yellowstone River on May 6, 1869 to begin their discovery of the river’s potential navigation.

From the Report on the Internal Commerce of the United States, Department of the Treasury, Bureau of Statistics, published in 1889:

Navigation of the Yellowstone

In 1869 the steamers Alone, Capt. R. B. Bailey, and the Cutler, Capt. Abe Hutchinson, went up the Yellowstone 45 miles, to cross over General Sully’s command.

The next boat was the steamer Key West, which started from Sioux City, Iowa, April 14, to ascertain if the river was navigable.

The object of this trip was to ascertain if the military expedition that was to escort the Northern Pacific surveyors could be supplied by boat at the mouth of Powder River. The boat was under command of General J. W. Forsythe, of General Sheridan’s staff.

In June the steamers Key Went, Peninah, and Far West loaded at Bismarck with supplies for the troops, who had started from Fort Rice across the country under the command of General D. S. Stanley.

The boats carried all the stores up, and the Key West, Captain Marsh, remained to transfer the command across the river, and then returned out of the river.

The next boat was the steamer Josephine, which went up in September to re-cross the command, returning to Fort Buford the 17th of September with nine companies of troops, and twenty-eight officers.

There was no boat on the river in 1874. In June, 1875, General Sheridan ordered General Forsythe to take the steamer Josephine and make a complete exploration of the stream.

The boat left Bismarck June 15, and made a very successful trip to a point now known as Huntley, 418 miles above the mouth of the Yellowstone.

The results of that trip were that the expedition under General Terry in 1876 was sent against the hostile Sioux, as it was found that the troops could be supplied at the mouth of the Big Horn River by steam-boats, 372 miles above the mouth of the Yellowstone.

Had it not been for this trip of General Forsythe, the Northern Pacific Railroad would probably have not extended across the Missouri, as the expedition under Custer would not have been made.

The disaster to Custer was the cause of the country being occupied by troops, who protected the builders of the railroad.

The boats used in 1876 to supply the expedition were the Far West, Tiger, Benton, Silver Lake, Carroll, Yellowstone, Durfee, and Josephine.

In 1877, the year that Forts Custer and Keogh were built, there were a large number of boats in the river. The following is a complete list: Far West, Western, Tiger, Yellowstone, Peninah, General Meade, General Sherman, Florence Meyer, Oceola (the last lost by being blown to pieces in a storm at the mouth of Powder River), Savannah, Kendall, Victoria, Arkansas, Fanchon, J. G. Fletcher, Tidal Wave, Silver City, J. H. Rankin (sunk at the mouth of the O’Fallon Creek), Rosebud, Big Horn, Fontenelle, General Custer, and Josephine.

In 1879 the Western, Batchelor, Terry, Benton, Rosebud, Big Horn, Helena, General Sucker, and the Yellowstone were in the river. The Yellowstone sunk in the Buffalo rapids this year.

In 1881 the Batchelor, Josephine, Rosebud, Big Horn, Helena, Black Hills, and Eclipse were on the river.

In 1882 the Eclipse made one trip, the General Terry one trip, and the Batchelor four short trips in connection with the railroad work.

In 1875 Messrs. Lamme and Nelson Story, of Bozeman, had a boat built at Evansville, Ind., for the navigation of the Yellowstone. It was wrecked in trying to cross the Wolf rapids and the cargo much damaged.

From the King’s Handbook of the United States by Moses Foster Sweetser, published in 1892:

The Yellowstone River rises in the Yellowstone National Park, in Wyoming, and traverses the entire length of Montana, for 850 miles, receiving the Big Horn, Rosebud, Tongue, Powder, and other rivers.

It is navigable to the Crow-Agency landing, and even to the present site of Billings, by small steamboats; and Mackinaw boats may ascend 100 miles further.

Since the railroad entered the valley, in 1881, steamboat navigation has been practically suspended.

The first steamboats up the Yellowstone were the Alone; the Cutler, in 1869; and the Key West, the latter ascending 245 miles, to the Powder River.

In 1875 Gen. Forsythe took the Josephine 418 miles up the Yellowstone, to Huntly, near Billings. In 1877 24 steamers plied on this lonely stream.

Steamers have ascended the Big-Horn to Fort Custer. The rivers abound in trout and salmon-trout, grayling, garfish, pike, suckers and catfish.

Flathead Lake, 28 by ten miles, is crossed by a line of green islands, and hemmed between tall cliffs and emerald meadows, with a village of Indian farmers at its foot, where the great river rushes out.

Steamboats navigate the lake, and run up the Flathead River.

Far north of Flathead Lake, the trackless Boundary Mountains are reflected in the Kintla and other lakes.

There are many beautiful mountain lakes in Deer Lodge County, and in the Tobacco Root Range, and elsewhere.

The Montana State Quarter Coin shows with a map of the Yellowstone and Missouri rivers, circa 1860s. 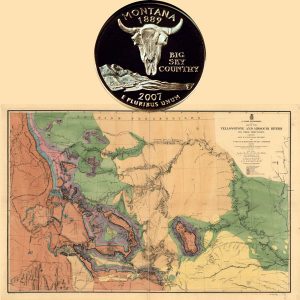