Today, the Washington Commemorative Silver Half Dollar Coin tells the story of part of Major George Washington’s trek to Ohio in 1753 that saw his return on January 16, 1754.

From his narrative, Major Washington described his task:

“On Wednesday the 31st. of October 1753 I was Commission’d & appointed by the Honble. Robert Dinwiddie Esqr. Governor &ca. of Virginia.

“To visit & deliver a Letter to the Commandant of the French Forces on the Ohio, & set out on the intended Journey the same Day.”

Washington hired several men to accompany him on his journey. One was Christopher Gist who, as a surveyor, knew the destination and was familiar with the Indians near the Ohio.

Both men described the journey, in some cases each would be more descriptive of the day’s events than the other.

It is interesting to compare the two men’s accounts for a couple of particular days of their return journey in December 1753.

“The Day following, just after we had pass’d a Place call’d the Murdering Town where we intended to quit the Path & steer across the Country for Shanapins Town, we fell in with a Party of French Indians, which had laid in wait for us, one of them fired at Mr. Gist or me, not 15 Steps, but fortunately missed. We took this Fellow into Custody, & kept him ’till about 9 o’Clock at Night, & then let him go, & then walked all the remaining Part of the Night without making any Stop; that we might get the start, so far as to be out of the reach of their Pursuit next Day, as were well assur’d they wou’d follow upon our Tract as soon as it was Light: The next Day we continued traveling ’till it was quite Dark, & got to the River about two Miles above Shanapins; we expected to have found the River Froze, but it was not, only about 50 Yards from each Shoar; the Ice I suppose had broke up above, for it was driving in vast Quantities. ”

“Thursday 27.—We rose early in the morning, and set out about two o’clock. Got to the Murthering town, on the southeast fork of Beaver creek. Here we met with an Indian, whom I thought I had seen at Joncaire’s, at Venango, when on our journey up to the French fort. This fellow called me by my Indian name, and pretended to be glad to see me. He asked us several questions, as how we came to travel on foot, when we left Venango, where we parted with our horses, and when they would be there, etc. Major Washington insisted on travelling on the nearest way to forks of Alleghany. We asked the Indian if he could go with us, and show us the nearest way. The Indian seemed very glad and ready to go with us. Upon which we set out, and the Indian took the Major’s pack. We travelled very brisk for eight or ten miles, when the Major’s feet grew very sore, and he very weary, and the Indian steered too much north-eastwardly. The Major desired to encamp, to which the Indian asked to carry his gun. But he refused that, and then the Indian grew churlish, and pressed us to keep on, telling us that there were Ottawa Indians in these woods, and they would scalp us if we lay out; but to go to his cabin, and we should be safe. I thought very ill of the fellow, but did not care to let the Major know I mistrusted him. But he soon mistrusted him as much as I. He said he could hear a gun to his cabin, and steered us more northwardly. We grew uneasy, and then he said two whoops might be heard to his cabin. We went two miles further; then the Major said he would stay at the next water, and we desired the Indian to stop at the next water. But before we came to water, we came to a clear meadow; it was very light, and snow on the ground. The Indian made a stop, turned about; the Major saw him point his gun toward us and fire. Said the Major, ‘Are you shot?’ ‘No,’ said I. Upon which the Indian ran forward to a big standing white oak, and to loading his gun; but we were soon with him. I would have killed him; but the Major would not suffer me to kill him. We let him charge his gun; we found he put in a ball; then we took care of him. The Major or I always stood by the guns; we made him make a fire for us by a little run, as if we intended to sleep there. I said to the Major, ‘As you will not have him killed, we must get him away, and then we must travel all night.’ Upon which I said to the Indian, ‘I suppose you were lost, and fired your gun.’ He said, he knew the way to his cabin, and ’twas but a little way. ‘Well,’ said I, ‘do you go home; and as we are much tired, we will follow your track in the morning; and here is a cake of bread for you, and you must give us meat in the morning.’ He was glad to get away. I followed him, and listened until he was fairly out of the way, and then we set out about half a mile, when we made a fire, set our compass, and fixed our course, and travelled all night, and in the morning we were on the head of Piney creek.

“Friday 28.—We travelled all the next day down the said creek, and just at night found some tracks where Indians had been hunting. We parted, and appointed a place a distance off, where to meet, it being then dark. We encamped, and thought ourselves safe enough to sleep.”

They traveled the wilderness in bitter cold and told similar stories yet with different details of the harrowing events of those couple of days back in 1753.

The Washington Commemorative Silver Half Dollar helps us remember and shows against an icy winter river in the background. 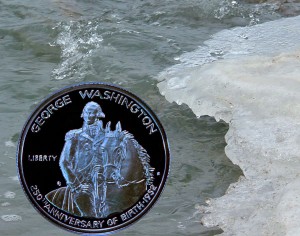