Today, the Washington Commemorative Gold Five-Dollar Coin remembers when the young soldier arrived at the French fort on December 11, 1753.

From Speeches and Addresses, Political, Literary and Religious by John Charlton, a Canadian Member of Parliament, published in 1905; an excerpt of his speech delivered in the Masonic Temple, Bay City, Michigan, on March 14, 1899 at a meeting in commemorating the 100th anniversary of Washington’s death:

A marvelous spirit of adventure and daring was shown by the early French colonists of Canada. The Frenchmen seemed to affiliate naturally with the Indian tribes, and to be at home in the wilderness.

At an early day, French voyagers, hunters, traders, and priests had penetrated to the farthest extremity of the region of the Great Lakes, had explored the course of the Mississippi, and of the Alleghany and Ohio, and had established military and trading posts at Mackinac, St. Louis, Vincennes, and later at Detroit, New Orleans, Duquesne, and other points.

La Salle and other master-spirits of the French colonists had a clear perception of the value and great natural resources of the valley of the Mississippi and its tributaries, and of the region of the Great Lakes.

While the English colonies stretched along the seaboard of the Atlantic, the far reaching purpose of the French was to confine the sphere of English occupancy to the Atlantic slope, and to hem them in from the rear.

At this period the American colonists were awakening to a comprehension of the nature of French designs, and a knowledge of the value of the territory that France sought to appropriate.

Looking back now upon the incidents of this period, it may be seen that there was absolutely no solution of the problem possible, except the destruction of the power of either England or France in America.

At the time when Washington was commissioned, in 1751, a great struggle had become inevitable. A little more than two years later, hostilities broke out, though a formal declaration of war between Great Britain and France did not come until 1755.

The northern colonies of Britain were engirdled in the rear by a line of fire, ravage and slaughter. Then followed Braddock’s defeat in 1755, and the defeat of the English at Ticonderoga in 1758.

Then came the capture of Ticonderoga, Crown Point and Niagara by the English in 1759, and the shattering of the French colonial empire in America by the capture of Quebec by Wolfe in September of that year.

The Saxon and the Celt had decided the question of the ownership of a continent; by the arbitrament of arms, the Saxon had triumphed and the Celtic power was crushed in the dust.

Washington had a clear perception of the importance of this struggle, and of the value of the country west of the Alleghany Mountains.

Governor Dinwiddie of Virginia, in the autumn of 1753, decided to send a special messenger to the headquarters of the French commander at a military post on French Creek, a western tributary of the Alleghany River, which was situated above Venango and fifteen miles from Lake Erie.

Washington was selected for this arduous task. He crossed the Alleghany and then proceeded northward and visited the French commander, Chevalier Legardeur.

Washington reached this post, December 11, 1753, and started upon his return journey on the fifteenth of December.

The journey was one of great hardship and peril. A part of it was made through trackless woods, surrounded by foes, with one companion, with short rations, through deep snows, and over swollen streams.

Washington keenly noted the force and equipment of the French at the posts he visited, and the general features of the country, and he saw and reported upon the importance as a military position of the portion at the confluence of the Alleghany and Monongahela Rivers, where Pittsburgh is now situated.

His report of his mission and journey, when made public, excited great interest, and secured for him the reputation of being a daring and resourceful man.

The services Washington rendered during the French war it is unnecessary to recount in detail.

He led the advance which captured Fort Duquesne, November 25, 1758, and performed various signal services which attracted for him the attention and respect of his fellow-citizens, and impressed them with the belief that he was a man full of resources and courage, and the possessor of excellent judgment.

The Washington Gold Commemorative Five-Dollar Coin shows with an image of the Allegheny River in Venango County, Pennsylvania, circa 1870. 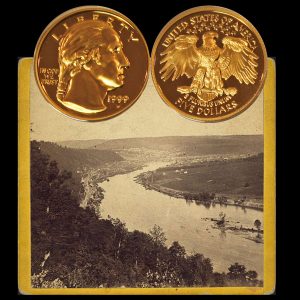