In 1993, the US Mint released half dollar, dollar and gold five dollar coins commemorating the fiftieth anniversary of World War II. The dates on the coin include 1991-1995 for the fifty years after the start (December 7, 1941 – Attack on Pearl Harbor) and fifty years after the end (September 2, 1945 – The Japanese surrender signed aboard the battleship USS Missouri) of the war. 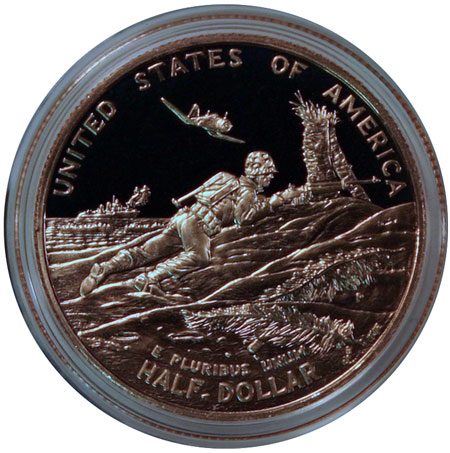 With both of the coins, the vignettes captured by the Mint’s artists show the men struggling with their fighting equipment in a war torn area a long way from home.

Though America had not entered the war, roughly 84,000 military resources were at Pearl Harbor to deter the Japanese from taking the islands.

Of those 84,000, roughly 3000 survivors live today. Officially recognized as a group in 1985, the Pearl Harbor Survivors Association continues today. Getting older, the men refuse to disband the group. Those who can continue to meet one or more times each year.

Take a look at some of these interesting web sites:

The Pearl Harbor Survivors Association page uses part of President Lincoln’s Gettysburg address in remembrance:  “We here highly resolve that these dead shall not have died in vain.” How appropriate.

Let’s take a few minutes to remember, recognize and appreciate those who fought and those who continue to fight for our freedom.