Today, the Maryland Tercentenary Commemorative Silver Half Dollar Coin remembers when the people met at St. Mary’s on June 3, 1891 to dedicate the monument to Leonard Calvert, the first governor of the area.

From the History of Maryland by Ethan Allen and Libertus Van Bokkelen, first published in 1886:

In 1891, on the site of the ancient settlement of St. Mary’s, a monument was erected to the memory of Leonard Calvert, the first proprietary governor of Maryland.

This monument is a shaft of American granite, 36 feet high, bearing the coat of arms of the State, together with appropriate inscriptions.

On the 3d of June it was unveiled, with simple but impressive ceremonies, in the presence of the Governor of the State and other distinguished citizens.

From Maryland During the English Civil Wars, Part I, by Bernard C. Steiner, published in 1906:

Near his grave at St. Mary’s was erected a monument by the State of Maryland in 1890, bearing the following inscription:

To the Memory of
Leonard Calvert
First Governor of Maryland
This monument is
Erected by
The State of Maryland.

Erected on the Site of the
Old Mulberry Tree
Under which the
First Colonists of Maryland assembled
To Establish a Government
Where the persecuted and oppressed of every creed
and clime might repose in peace and security,
adore their common God, and enjoy the priceless
blessings of civil and religious liberty.

By His Wisdom, Justice, and Fidelity, He Fostered the
Infancy of the Colony, Guided it Through Great
Perils, and Dying, Left it at Peace.
The Descendants and Successors of the Men
He Governed, Here Record
Their Grateful Recognition of His Virtues.
November, MDCCCXC.

In Honor of Maryland’s First Governor.

The monument to Leonard Calvert, the first Governor of Maryland, was unveiled at St. Mary’s today.

The ceremony began with an invocation by Cardinal Gibbons, read by the Rev. Joseph Cunnane of Upper Marlboro.

Col. J. Thomas Scharf then delivered a historical discourse, after which Miss Julia Steuart Calvert pulled the cord which caused the draping to fall from the monument.

“Maryland, My Maryland,” with words written for the occasion, was sung by the ladies of St. Mary’s Female Seminary, after which Attorney-General William Pinckney Whyte delivered the oration of the day.

The ladies of St. Mary’s Seminary sang “America,” and as the group stood with bowed and uncovered heads the Right Rev. William Paret, Bishop of Maryland, pronounced the benediction.

A burst of music from the band closed the proceedings.

The Maryland Tercentenary Commemorative Silver Half Dollar Coin shows with an artist’s image of the monument dedicated to Leonard Calvert, circa 1890s. 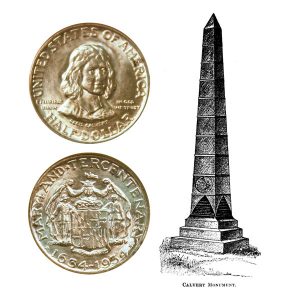