Today, the Gold Half Dollar Coin remembers when the Japanese Embassy, numbering 72 persons of all grades, arrived at Mare Island, San Francisco, in the U. S. Steam Powhatan on March 29, 1860.

From the Nautical Magazine and Naval Chronicle of June 1860:

Occasional Papers of the Nautical Club. — No. VII.

The Japanese were in the ascendant. The manners and customs of this interesting people, their sincerity and simplicity of character, their cheerful disposition, active and cleanly habits, implicit obedience to their laws, and honesty of purpose, compared with their crafty and stolid Chinese neighbors, elicited the general admiration of the Club.

The discussion arose from a paper being read giving some account of the progress of the Japanese Ambassadors in their visit to the United States.

It appeared by it that they sailed from Kanagawa on the 13th of February, in the U.S. steamship Powhatan, and on the 5th of March arrived at Honolulu, where they paid a non-official visit to King Tamehameha.

Leaving Honolulu after a day or two, they arrived next at San Francisco on the 29th of that month, where they were located at Mare Island, and it was expected would continue their voyage for Panama in the early part of April.

The account states that the officers of the ship could not have had less trouble with the same number of any other nation. They have been carefully observant of everything on board from the day of their starting.

Their draughtsmen have taken copies of the machinery, and notes have been made of everything that has transpired on board by a censor, or secretary, who has also had a copy made, which, with the notes of what transpires up to their departure thence, will be forwarded to the Emperor by the next vessel leaving for Japan. A journal was also left at Honolulu for the same destination.

A number of them have made considerable progress in English. There are two or three interpreters with the embassy, but it appears none of them can compare with Captain Mangero, of the Kandinmarro, who may, perhaps, accompany the Ambassadors to Washington.

The appearance of these visitors differs in few if any particulars from that of the Admiral and his crew. The dress of the Ambassadors may be a little richer, but in other respects they are identical. Those who have seen the people of the Kandinmarro have a perfect idea of the newer comers.

Their food on board has been mostly rice; for the cooking of which they have had a place of their own, and the culinary operations have been performed by native cooks.

They stood the passage very well, few of them having suffered much with sea-sickness. The weather has been unusually rough, affording not only an opportunity of testing the Japanese, but the ship herself.

It appears that a reception was held at San Francisco by the Ambassadors, — the principal officers, civil and military, being presented to them; and the impression made by the Japanese has gained them the good opinion of all.

The impression made by them at Honolulu was no less favorable. Here not only the Ambassadors, but also each of the other Japanese, as they entered the throne room, bowed three times very low, according to their own custom on such occasions.

His Majesty addressed them in substance as follows: —

“I feel much pleased to welcome you to my kingdom, and it affords me great pleasure that circumstances have favored me, through the kind permission of the United States Commissioner and the gentlemen in whose charge you at present are, to receive you as Ambassadors of the great Emperor of Japan, while on your way to the friendly government of the United States of America, a nation to which my people are so much indebted. I shall feel much gratified if your visit to these islands is agreeable to you, and hope that when you return to Japan you will express to your sovereign the friendly meeting which I have had the honor of having with you, and the high esteem I entertain for his Majesty and his people.”

His Excellency Sinme, First Ambassador, replied, his words being translated into Dutch by Namura, and then into English by Mr. Banning: —

“I am greatly obliged for the friendly reception with which your Majesty has honored us; and I beg to express my thanks for the trouble you have been pleased to take on our behalf, and shall not forget the kindness with which we have been received in this city, not only by your Majesty, but by the inhabitants of your capital.”

At the conclusion of the addresses, the Censor, Vice-Governor, and others of the embassy, were presented, and after them a number of the officers of the embassy. Each of them recorded his name in the autograph-book of the palace, which already contains those of many dignitaries of foreign countries; few, however, of them will be examined with more curiosity than these.

There are several of the embassy who can speak broken English, but probably the one most conversant with our language is Namura, who is also familiar with Dutch.

The chief Ambassador is among the highest in rank of the two hundred princes or nobles in Japan. These vary somewhat in rank, according to the size and importance of the province over which they preside, or which may be theirs by hereditary right.

Some provinces can muster 60,000 soldiers ; others again not 6,000. The rank of the four principal dignitaries we find as follows: —

1. Ambassador — Sinme-Bujen-no-kami (Sinme, Lord or Prince of the province of Bujen). Sinme is the hereditary name of this prince, who ranks a little higher, or is more powerful, in Japan than the following:

3. Censor — Ogure, Lord or Prince of the province of Bungo.

These three are hereditary princes or rulers of provinces, and about equal in rank.

The proper title of each in England would be “His Royal Highness,” and in the United States, ” His Excellency,” being the highest titles under the sovereign or ruler.

The office of the Censor has been misinterpreted. He acts as Secretary to the Embassy, it being his duty to record everything for the information of the Emperor. He leaves a copy of his journal to be forwarded to the Emperor of Japan by the first vessel which may sail for Japan. The same will probably be done by him at San Francisco and other points of the journey.

The fourth dignitary (Morita Okataro) appears to be not so high in rank. He is sent out to act as treasurer, and on account of his sound judgment and prudence it is his province to advise and counsel. He is the manager of the embassy, and nothing can be done without his approval. He appears to be clothed by the Emperor with very high powers. All those four officers are from the nobility — the advisers and councilors of the Emperor.

There are in Japan, as in most other nations, two political parties, — one of which may be called the progressive party, the other the conservative. This political division extends to the nobility and to the councils of the Emperor.

The progressive party contends for a liberal policy towards foreigners, the opening of the principal ports to foreign trade, and, in short, the abolition, at least in a measure, of the ancient restrictive laws and customs.

The conservative party, on the other hand, contend for a rigorous adhesion to the old taboos and customs.

The progressive party is constantly increasing in number and becoming more powerful, and is destined to create an entire change in the internal policy of that empire, unless foreign governments, by indiscreet acts of their officials, should check its progress by entering into open hostilities with the nation.

It has been reported that the late Emperor of Japan committed suicide on account of these political contests and proposed innovations on the old regime. This is incorrect : he died a natural death.

The origin of this Embassy is attributable to the diplomatic skill of Commissioner Harris, who having impressed on the Japanese the importance of becoming more acquainted with foreign nations, persuaded the authorities to stipulate in the last treaty that an Embassy should be sent to the United States within a limited period.

Although the Japanese government subsequently endeavored to annul this obligation, Commissioner Harris would not consent to it, maintaining that it was for the mutual advantage of both nations that it should be fulfilled.

Finding him immovable, the new Emperor yielded, and this Embassy is sent out, and we doubt not will prove a great and lasting benefit to Japan as well as all foreign nations.

The Gold Half Dollar Coin shows with an image of the United States Navy Yard on Mare Island, circa 1866. 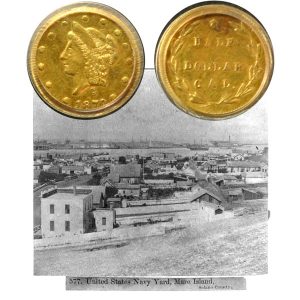