Today, the USS Constellation Medal remembers the Act of February 25, 1880 that allowed the naval ship to be used for relief efforts to Ireland.

Letter from the Secretary of the Navy,

Report of the commander of the relief-ship Constellation. June 15, 1880. — Ordered to be printed.

Hon. William A. Wheeler, Vice-President of the United States:

Sir: I have the honor to inform the Senate that in obedience to the act approved February 25, 1880, I caused the United States ship Constellation to be fitted out for the purpose of transporting from New York to Ireland such supplies as were donated by the liberal-minded citizens of that city to the starving people of that country. That vessel, under the command of Commander Edward E. Potter, left New York on the 30th day of March, and has just returned.

The Constellation reached the port of Queenstown on the 20th day of April, and delivered the supplies to the proper authorities at that city, whereupon they were immediately distributed to those most in need of them.

The authorities and people were impressed in an extraordinary degree by the fact that the Government of the United States had fitted out a national vessel upon this mission of benevolence, and demonstrated their gratitude by continued acts of courtesy and kindness to the officers in charge. The Government of Great Britain, through its minister plenipotentiary to the United States, has also expressed its high appreciation of this act of international comity. Evidences of these are herewith enclosed.

The act of Congress contained an indefinite appropriation of “any sum of money” I might consider necessary for the purposes of this expedition. But I have the honor to inform the Senate that I have not drawn from the Treasury a single dollar for the purpose, having paid the whole expense out of the ordinary appropriations for the support of the Navy for the present fiscal year.

Sir: I have the honor to inform the department of the arrival of this ship in this port this morning. We had a very anxious and boisterous passage. Sent the accompanying telegram to United States consul at Dublin.

Have communicated with United States consul here, and am now awaiting the decision of the committee as to whether I shall discharge here. Some repairs to main chain plates are necessary.

Sir: In my letter from Queenstown, of April 20, I had the honor to inform the department of the arrival of this vessel at this port, and to transmit a copy of a telegram sent to the United States consul at Dublin. Rear- Admiral Hamilton kindly placed a buoy off Haulbowline at my disposal.

On April 21, Rev. Dr. Hepworth visited the ship in behalf of the New York Herald Relief Committee. On the evening of April 21, while awaiting the decision of the relief committee, I received the following telegram from his royal highness the Duke of Edinburgh, admiral and superintendent Naval Reserves:

Having been directed to meet the Constellation in Ireland, I congratulate you on your safe arrival at Queenstown, and I am bringing all the ships engaged upon the relief service to Queenstown to receive the Constellation’s cargo and carry it to the places where it is intended it should be distributed. Please await my arrival on Friday before taking further action.

His royal highness, the admiral, arrived in his flag-ship, the Lively, Friday afternoon. I immediately called upon him, which call he returned the following morning.

During the afternoon, Saturday, a gun-boat came alongside, took a small portion of the cargo and left the harbor. The relief squadron, of which the Lively is flag-ship, flies the American ensign at the fore while a relief vessel is passing out of the harbor. Have been busily engaged discharging this week, and hope to be able to commence taking in ballast by the 3d of May, and to sail from this port about the May.

Copy of resolution of the Board of Guardians, passed at their meeting on Thursday, 22nd April, 1880.

Resolved, That the Cork Board of Guardians wish to express their gratitude for the generous supply sent by the American Nation for the relief of distress in Ireland, and beg to express to the captain and officers of the Constellation our appreciation of their efforts to serve our country, and, while doing so, beg to wish them a hearty welcome to Ireland.

Nicholas Mahoney, Chairman of Board of Guardians.

The address of the people of Queenstown and the Great Island to Captain Potter, the officers, and crew of the American sailing-frigate Constellation, now in the harbor with relief for our suffering people.

Captain Potter and Gentlemen: This being the first port at which you on your noble but melancholy mission of charity have called, we, the inhabitants of the first town and district on that port, deem it our imperative duty to offer you a most heartfelt welcome. We desire to express our deepest gratitude to the generous and noble people of your free country for this practical proof of their sympathy with our suffering poor; we desire to thank your government for the promptness with which it granted for the transmission of such timely relief the gallant vessel now under your command; and to yourselves we tender our most undying gratitude for chivalry so worthy the soldiers of your free country, which on a mission of mercy led you at a most tempestuous season to brave the dangers of the deep.

Thirty-three years ago, in one of the darkest periods of our strange history, we had a similar proof of the generosity of your nation. We have not forgotten it, we have not been ungrateful for it, and this other fresh proof of your sympathy for us shall bind a thousand-fold more firmly the bonds that link the people of Ireland in sympathy and affection to their friends and kindred beyond the sea.

But, gentlemen, while with full hearts we give expression to that gratitude which you have merited so well, we cannot conceal from you our deep sense of humiliation that for the exercise of such generosity towards us any occasion should arise.

Trusting, therefore, that under these melancholy circumstances you will appreciate our motives in expressing our gratitude through this simple address, and assuring you that our gratitude shall last as long as Irishmen have Irish hearts to feel it, we remain, Captain Potter and gentlemen, on behalf of Queenstown and the Great Island,

From the people of the county and city of Cork to Captain Potter, the officers, and crew of the American naval ship Constellation.

On the threshold of that country yon have come to succor on a sad mission of noble charity, we greet you warmly, and welcome you, and proffer you the gratitude, sincere indeed, of a poor, downtrodden, but liberty-loving people.

We desire to express our gratefulness to the generous citizens of your free country for the many practical manifestations of sympathy with our suffering people, and to your government for the promptitude shown by giving the gallant ship under your command for the transmission here of your timely relief.

In return for such noble and unselfish generosity, we can only hope that in future generations, as it has been in the immediate past, Irishmen will be ever ready to defend America’s honor and integrity, and continue to be the vigilant sentinels on the watch-towers of her liberties.

In conclusion, we can only say that that flag which is the epitomization of your country’s honored history, the spangled diploma of your well won authority, will be ever respected by those who have been afforded by a melancholy coincidence the opportunity of seeing you here to-day.

The USS Constellation Medal shows with an image of the version of the ship, circa 1890. 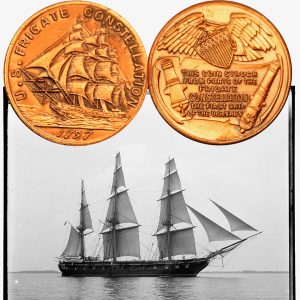