From the Explosives Act, 1875 –Tenth Annual Report of Her Majesty’s Inspectors of Explosives; Being Their Annual Report for the Year 1885 by Great Britain Home Office, January 1, 1886:

The extensive operations which have been in progress for seven years with a view to the removal of “Flood Rock” (Hell Gate), New York, and which were brought to a striking conclusion by an explosion of unexampled magnitude on the 10th October, are perhaps hardly appropriately placed in a section professedly relating to “Experiments.”

But this part of our Report seems on the whole the most convenient in which to introduce some notice of these blasting operations which were on a scale never before approached, being designed to effect the removal of a mass of rocky obstruction some nine acres in extent, for which purpose a charge of not less than 288,000 lbs. (= 144 “tons ”) chiefly composed of the explosive known as “rack-a-rock” with dynamite primers being employed.

So tremendous a charge has never before been employed, even the great Hell Gate blast of 1876, which we noticed in our Annual Report for that year, and which was the largest thing of the sort up to that date did not go beyond about 26 tons of dynamite, or less than one-fifth what was used on the present occasion.

The present operations were supplementary to those of 1876 at Hell Gate.

We have taken some pains to obtain full details of this most interesting and stupendous blasting operation, and through the courtesy of Professor Munroe of the Annapolis U. S. Naval Academy, and of Generals Newton and Abbot, we have received copies of various papers, drawings, and reports on the subject, and we think we cannot do better than quote a very concise and interesting record of these operations compiled by Professor Munroe for the proceedings of the Naval Institute.

“The blowing up of Flood Rock was successfully accomplished October 10, 1885. The official report is not yet issued, and hence the following account has been compiled from various sources of information. Flood Rock had a superficial area of nine acres, about 250 square feet of which was above water. The rock consisted of hornblende gneiss, with intersecting cross veins.

“A sea wall 7 feet high was built around the island, and two shafts were sunk, one 67 and the other 40 feet deep. The main shaft was used for removing the excavated rock in blasting out the headings. The smaller shaft was used for the tubes conveying the compressed air which drove the drills.

“The first series of headings branched out from the main shaft at a depth of 40 feet, and from the bottom of the shaft another series diverged directly under those above. The headings branched at right angles every 20 feet, and were 60 in number in each tier. The double system of headings was employed to gain a sufficient depth after the explosion without the necessity of dredging out to the extent that was necessary at Hallet’s Point.

“The total length of tunneling was about four miles, consisting of 24 galleries, running north and south, and 46 running east and west. The longest of these was 1,200 feet in length, 6 feet wide, and 10 feet high. There was a thickness of from 10 to 25 feet between the roof of the top tier of galleries and the water. There were 467 pillars left to support the roof, these were 15 feet square. The whole rock was honeycombed with tunnels, about 80,000 cubic feet of rock having been removed.

“There were drilled in the pillars and roof 13,286 chambers for holding the cartridges, each chamber being 3 inches in diameter, and about 9 feet deep. These chambers were filled with rack-a-rock cartridges, of which there were about 47,000 used, each being 2.5 inches in diameter and 2 feet in length, and containing about six pounds of the explosive.

“The wiring in the mine was divided into 36 circuits, the batteries attached to these circuits being stowed in a tool house on the rock. The wire of the primary circuit which actuated the electro-magnet that closed the secondary circuits was led across to the Astoria shore on the morning of the explosion. The firing key was about 1,200 feet from the mine.

“Two siphons, one 12 inches in diameter and the other 3 inches, were set at work at 10 a.m. October 9th, flooding the mine, and they completed their work early the following day. The first effect of the explosion was to produce a rumbling noise, and then to project a mass of water over an area of about 1,200 square feet to a height of about 150 feet.

“Masses of rock rose in the midst of this water to a height of from 40 to 50 feet. The explosion lasted about 30 seconds. As the water fell, a dense cloud of yellowish smoke arose and floated over the Astoria shore.

“Observations were made in many places, at various distances about the centre of the explosion, on the time of the arrival of the terrestrial and aerial disturbances, and they showed that the terrestrial effect was apparent as far south as Princeton, N.Y., and as far east as Cambridge, Massachusetts; and, as was to be expected, that the terrestrial impulse was in advance of the aerial, at least at the stations near at hand. The rate of transmission cannot be stated until these observations are reduced.

“After the explosion the rock appeared undisturbed, though on close examination it was found to be somewhat fissured. However, it slowly settled, and by October 13th the entire rock was below water.

“It was not intended that the rock should be broken very fine, since, with the appliances at hand, pieces of from 10 to 15 tons in weight could be most economically handled. The work has been in operation about nine years, and has cost upwards of 1,000,000 dollars.

“The cost of removing the broken rock is estimated at 600,000 dollars, and two years’ steady labor will be required. The channel will then have a depth of 26 feet over an increased width of 600 feet.”

Some valuable observations were made as to the distance at which the earth tremor due to this remarkable explosion was sensible, and as to other points in connection with the same. These observations are detailed in an interesting paper by General Abbott, of the Corps of Engineers, United States Army, by whom the operations were immediately directed.

The New York State Quarter Coin shows with artists’ images of the explosion of Flood Rock in October  1885 from Frank Leslie’s Illustrated Newspaper. 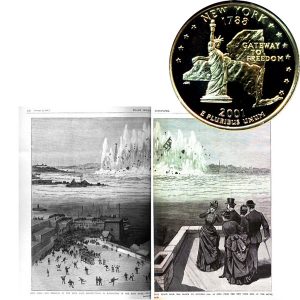