From the Muncie [IN] Daily Times:

The Present Coinage of Silver

Is the country going to the dogs for lack of enough silver money, as the advocates of the free coinage of silver assert?

Circular No. 123, of the United States treasury department (second revised edition), page 61, under the head of “Coinage of Silver,” says:

“The government is still coining standard silver dollars from the bullion purchased under the act of July 14, 1890.

“The seigniorage is an addition to the volume of money in the country, while the silver dollars representing the cost of the bullion are not, since they are only paid out in redemption of the treasury notes of 1890, whereupon the latter are canceled and retired, as prescribed by the act of July 14, 1890.”

That most of the coinage has been during the present year is shown by a table in the same circular, taken in connection with the above.

Since the repeal of the Sherman act, the government has coined nearly twice as many silver dollars as were coined from 1792 to 1873:

Since the repeal of the Sherman act—less than three years—more than half as many silver dollars had been added to the volume of money in the country as had been coined from 1792 to 1873—eighty years.

“An unstable currency, producing instability in business and prices is peculiarly injurious to the farmer.

“Neither his education nor his disposition accustoms him to watch the barometer of the exchange.

“When he has conducted his business with prudence and skill, with the familiar knowledge and the sagacious estimate of all the circumstances that belong to it, he ought to be safe.

“He ought not to be subject to the tremendous agency of an unseen cause, which may disappoint his wisest calculations and overwhelm him in sudden ruin.

“He ought to be secure in the tranquility of his fireside, from the curse of an unstable and fluctuating currency.” —The late Samuel S. Tilden in a speech at New Lebanon, Ohio.

The Man Who Has a Silver Dollar.

Knows that it is worth 100 cents for the purchase of whatever he may need for himself and his family, although the actual value of the silver in the coin is only about fifty-three cents.

Why? Simply because the government of the United States bought the silver, coined these dollars and put them into circulation and has given its pledge to keep each of them worth 100 cents, no matter how much the bullion value of the silver used in making it may decline.

But nobody knows what the silver would be worth under the proposed system of free coinage.

Under free coinage of silver the government would not put out silver dollars on its own account, and its guarantee would be withdrawn.

Then what, under free and unlimited coinage, would take the place of the government guarantee which now supports the silver dollar at par?

Nothing. For the certainty of the government’s guarantee it is proposed to substitute the mere chance that free coinage will raise the bullion value of the silver in the dollar to 100 cents.

What does the change amount to?

Why American Workmen Should Vote For McKinley and Honest Money.

Capital and labor are natural partners—each unprofitable and impotent without the other.

Without the employment of capital labor would be idle.

It has been very well said that business engagements involve time contracts; that all contracts are dependent upon payments; that no business man will enter into contracts until he know with inerrant explicitness just how much money he is to receive.

He must do so in order to be able to gauge how much he must allow for material and how much for wages. If he does not there must be pinching, and the pinching will come on the wages.

The money which the working man gets as wages is the only reward he has out of that which his labor creates.

Surely that would be of the best—stable and unchanging.

The working man cannot gamble on his wages.

They are not too great at their best.

The dollar of Wall street, as it has been called, in not any too good for the laborer.

Hoist by Their Own Petard.

One stock argument of the silverites is that silver has not depreciated in price, but that the price of gold has appreciated.

This is bad, very bad, they say.

The price of gold is too high, much too high, they argue.

But in the next breath that they draw they clamor for the enactment of a law that would, in their opinion, immediately advance the price of silver to $1.29 per ounce—an appreciation of about 50 percent at one jump!

In short, their whole purpose appears to be to make silver worth as much as gold, or as near that price as possible.

If the present price of gold is bad, very bad, for the country, do not the efforts of Bryan and the free coinage promoters to put up the price of silver merit universal condemnation—their own along with that of the rest of the world?

A Slave to Custom.

Sailorman Sewall of Bath, Mo., is a slave to custom. He admits it himself and laments it.

He would just as soon be paid in silver and, mayhap in lead or leather; but so long as it is fashionable to insert the gold clause is inserted, and there’s an end of it.

The proverb says that one might as well be out of the world as out of fashion.

“We now have a gold dollar worth 100 cents. The silver king presents 50 cents’ worth of silver and says: ‘I want Uncle Sam to lie for me and say this 50 cents is a dollar, just as good as a gold dollar.’

“He knows if he tells the world that the world will not believe him; therefore, he wants the government to do his lying for him, and to stamp these lies indelibly upon his silver product.

“That, my friends, is the bald proposition which the bonanza king, in fact, makes to the American people, and which the socialistic end of the Democratic party, under the lead of Mr. Altgeld, has exalted into a great now issue which is to save the Democratic party from the gloom of long merited defeat.”—John R. Tanner, Republican candidate for governor of Illinois

The GSA Morgan Silver Dollar Coin shows with an 1896 depiction of The Free Silver Highwayman at It Again by Keppler. 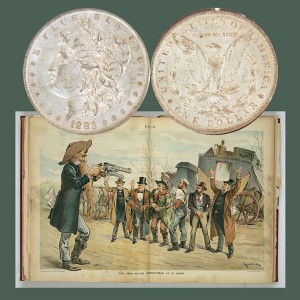