Today, the Liberty Head Five-Cent Coin remembers when the Thetis set sail on May 1, 1884 heading the Greely Relief Mission.

The Thetis Ready to Sail Today.

Final Preparation on Board — Officers and Crew — Some Visitors.

The Thetis, flag-ship of the Greely Relief Expedition, will sail from the Navy Yard today at 4 o’clock. She will be the advance ship and will lead the way into the ice. The last piece of work was done on board of her yesterday, and the last thing was taken on board.

It was an animated scene on board of her yesterday, many people being there to say good-bye to officers and men, and everybody attached to the ship being busy with the final preparations.

The sailors had decorated their bunks in the deck-house with a variety of colored prints and photographs, and at the head of some of them hung beads and crucifixes. Packages of magazines and other reading matter had been sent to some of the sailors, and they were stowing them away in the lockers under their berths.

A long table extended down the middle of the deck-house, and altogether it looked cheerful and comfortable. Both officers and men were in good spirits and hopeful for the success of the expedition. The crew are a robust, manly-looking set of men, and they have been selected with great care. Ensign Harlow, one of the officers of the ship, takes with him a fine set of photographic appliances.

On the quarterdeck and in the ward room there were flowers, officers in their brilliant uniforms, ladies, good-byes, good wishes and bustle.

On the bunks of the officers were piled clothing, books and various other articles. One trunk stood out, amid disordered companions, a model of neatness. That belonged to Lieutenant Taunt, the only married officer on board except for the captain.

Among the visitors to the ship were two army officers, one from Governor’s Island and one from Fort Hamilton, sent to tender Captain Schley a salute as he sails bye these forts today.

Ice Pilot Norman, who went up with Greely on the Proteus, has expressed an opinion that the Lieutenant is still at Lady Franklin Bay, and that the Thetis will have to go there to find him. He is confident that the ship will be able to reach that point.

Sailing of the Thetis.

The Flag Ship of the Greely Relief.

Secretaries Chandler and Lincoln and Other Officials Present.

The booming of the guns of the saluting battery at the Navy Yard announced the arrival of the Secretary of the Navy at 10 a. m. yesterday. Commodore Fillebrown and staff met him at the gates and escorted him to his house. Thence he went to inspect the Alert, and later to the Thetis.

He was accompanied by the Secretary of War, and Commodore Earl English, Chief of the Bureau of Equipment and Recruiting, As the party went over the side of the Thetis, the officers escorted them to the cabin, where breakfast was served.

After breakfast the party was joined by General Hancock and several other officers of the army and navy. Several ladies were also aboard among them being Mrs. Schley, Miss Virginia Schley, Mrs. Taunt, Mrs. Fillebrown and a sister of Lieutenant Chipp, who was dressed in deep mourning for her brother.

The Captain’s and the ward room were filled with flowers and in the deck-house were many mementos which told that “Jack” also had friends who remembered him.

Secretaries Chandler and Lincoln, General Hancock, Captain Schley and the other officers of the ship having formed a group on the quarter deck a photograph was taken by Ensign Harlow. A photograph of the crew was also taken.

The crew were then mustered and arrayed themselves in two lines facing Inward, on the port side of the spar deck. Secretary Chandler walked between the lines, shaking, hands with each man and wishing him a safe return.

Shortly after 2 o’clock all the visitors went to the Tallapoosa which was to accompany the flag ship outside of Sandy Hook. The Navy Yard tug Catalpa came along side the Thetis, the lines were cast off and the ship started on her voyage. The last things taken aboard were two large baskets of flowers sent to Lieutenant Taunt.

As the Thetis left the wharf the guns of the battery fired a salute, and the people on the shore and on the Tallapoosa cheered and waved their handkerchiefs.

As she proceeded down the river and down the bay she was saluted by blasts from the whistles of tugs and steamboats; flags floated from the towers of the Bridge and from the shipping along the water front.

There were crowds on the Bridge, on the Battery and on the tops of all the high buildings down town who watched the ship with many expressions of hope for her success and safe return.

At Governor’s Island a salute of twenty-one guns was fired from Castle William and as the Thetis passed through the Narrows another salute was fired from Fort Hamilton. The Thetis acknowledged the numerous salutes by dipping her flag and continued on into the lower bay and thence to sea.

Outside the Hook the Tallapoosa bade good-bye to the Thetis and returned to the city.

The ship-shape appearance of the Thetis was remarked by all who saw her. Everything was as taut and trim and neat as possible, and there was no confusion or bustle about her departure.

Ensign Chambers and Seamen Carl Larsen and C. A. Nelson go on the Thetis as far as St. John’s. They will go thence on the coal steamer Lochmarie to Upernavik, where they will join the Alert and go to Little Island.

Work is being rapidly pushed on the Alert and she will sail on May 10. The Thetis has on board 2,000 pounds of powder, 1,000 pounds of gun cotton and 600 torpedoes. These explosives will be used for removing ice obstructions.

The Liberty Head Five-Cent Coin shows with an image of the U.S.S. Thetis, circa mid-1880s. 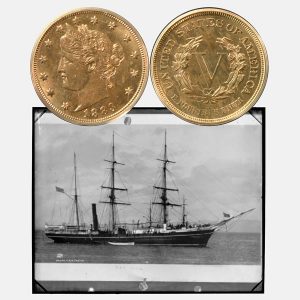