Today, the Lincoln Presidency One Cent Coin remembers when John C. Fremont withdrew from his candidacy for president with one letter of September 17, 1864 and another on September 21.

Fremont strongly disagreed with Lincoln’s decisions and actions as president, however, being of the same Republican political party, he chose to withdraw to keep the party focused on defeating their opponents, the Democrats.

From the Philadelphia, Pennsylvania, Evening Telegraph newspaper of September 22, 1864:

He is no Longer a Candidate.

The Union Party Must Not Be Divided.

McClellan Must Be Defeated.

His Opinions of the Administration Unchanged.

Boston, September 22. The following letter of General Fremont, withdrawing from the canvass as candidate for the Presidency, is published today:

Boston, September 21. Gentlemen: I feel it my duty to make one step more in the direction indicated by my letter of the 25th of August, and withdraw my name from the list of candidates.

The Presidential question has, in effect, been entered upon in such a way that the union of the Republican party has become a paramount necessity.

The Republican candidate, on the contrary, is pledged to the re-establishment of the Union without slavery; and however hesitating his policy may be, the pressure of his party will, we may hope, force him to it.

Between these issues, I think, no man of the liberal party can remain in doubt, and I believe I am consistent with my antecedents in withdrawing—not to aid in the triumph of Mr. Lincoln, but to do my part towards preventing the election of the Democratic candidate.

In respect to Mr. Lincoln, I continue to hold exactly the sentiments contained in my letter of acceptance. I consider that his administration has been politically, militarily, and financially a failure, and that its necessary continuance is a cause of regret for the country.

There never was a greater unanimity in a country than was exhibited here at the fall of Sumter, and the South was powerless in the face of it; hut Mr. Lincoln completely paralyzed this generous feeling. He destroyed the strength of the position and divided the North, when he declared to the South that slavery should be protected. He has built up for the South a strength which otherwise they could have never attained, and this has given them an advocate on the Chicago platform.

The Cleveland Convention was to have been an open avowal of that condemnation which men had been freely expressing to each other for the past two years, and which had been made fully known to the President; but in the uncertain condition of affairs, leading men were not found willing to make public a dissatisfaction and condemnation which could have rendered Mr. Lincoln’s nomination impossible, and their continued silence and support established for him a character among the people which leaves now no choice.

United, the Republican party is reasonably sure of success; divided, the result of the Presidential election is at the least doubtful.

I am, gentlemen, very truly, yours,

To Messrs. George L. Stearns and others, a committee, &c.

Boston, September 22. The following is another letter from General Fremont, in which he gives his reasons for withdrawing more fully:

Nahant, September 17, 1864. Gentlemen: I enclose you my letter of reply to an invitation from some of my Republican friends to meet them at Faneuil Hall.

In declining their invitation I have informed them of my intention to stand aside from the Presidential canvass, and assigned my reasons for doing so. To avoid repetition, I enclose you the letter, communicating to you now officially my desire to withdraw my name from the list of Presidential candidates.

In this decision I have the approval of such of our friends as I have been able to consult. I have thought it not prudent to incur the longer delay of consulting others, but I have reason to believe that they will unite with me fully upon the propriety of the step I have taken.

But in withdrawing from the post of candidate, I do not intend in any way to withdraw from my share in the labor which we jointly undertook to secure the triumph of the ideas represented by the Radical Democracy.

Whatever the next administration may be, we owe it to ourselves to form a phalanx, compact, and capable, by its thorough unity, of exercising a pressure strong enough to insure the eventual success of the principles for which we have been contending the re-establishment of the Union, the abolition of slavery, and practical respect for liberty.

In the present composition of parties it is indispensable that earnest men should devote themselves to watching the progress and insuring the success of these issues, regardless of men or parties.

Mr. Lincoln says he does not lead, but follows the will of the people. It remains then for the people, in the event of his re-election, vigilantly to require the following at his hands; and further to require, that in the execution of his duties he keep scrupulously within the Constitution and the laws; to make him recognize that he holds his place and his power not as belonging to himself, hut as a really faithful servant of the people.

This is the important duty which we have now to perform.

Although as representatives of the Cleveland movement we surrender our functions, the duty of watching party politics; the Constitution remains.

What steps are necessary in the performance of that duty must be a subject for future consultation.

I am, gentlemen, respectfully and truly yours, &c.,

To Messrs. Worthington C. Snethen and others, a Committee, &c.

The Lincoln Presidency One Cent Coin shows with an image of the presidential campaign banner for John C. Fremont and his running mate, John Cochrane, circa 1864. 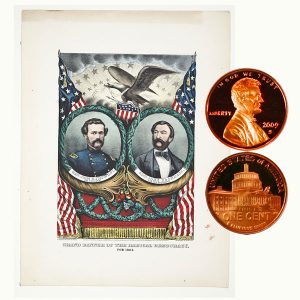