25th – The Press on the Situation

The Boston Evening Transcript says: “The Gold combination in New York should be broken down by the Government, if possible. With $80,000,000 in solid bars and eagles at the disposal of the Secretary of the Treasury, it seems that some way might be devised whereby a few rapacious speculators should be prevented from unsettling all values dependent in any way upon the precious metals. We have heard the names of three somewhat notorious persons who pretended to hold, a day or two since, in New York, $28,000,000 in gold, whose real pecuniary means were not probably $200,000, if they paid their debts. Such men should have their fill in buying fold after they had made the price at which they expected to unload their purchases at the expense of honest merchants or individuals trapped into the same plundering business with themselves.

“It is believed that a large part of the ‘short’ interest in the gold market is that of merchants who have been borrowing the article instead of purchasing it for their legitimate trade, believing that the price was altogether too high. Few, if any, professional dealers are ‘short’ at the present time. They ‘covered’ at less than 140. Under such circumstances the Secretary of the Treasury could administer instant relief to the mercantile community by selling gold enough either to supply the merchants or break the speculators, who have got up a corner.”

The New York Tribune says: “We are quite confident that a policy which should prevent these mischievous movements in the gold market would meet with a most universal approbation, and that the do nothing policy finds but few supporters outside the interested ring. Look to this matter quickly, Mr. Secretary, or the laurels you have won will be withering before the frost comes.”

“It is now well known that most of the gold which had been in the hands of the people, as well as the gold held by the banks, has been secured by a powerful bull ring, the members of which are absolute masters of the situation, and can put the price up to any rate they may please.

“They have ascertained that many leading merchants, men of undoubted standing, as well as speculators, have sold vast sums of gold short, and they seem determined to bleed them as much as they can bear, up to the point of death.

“It is not a matter of surprise, therefore, that the shorts are calling on the Secretary of the Treasury to relieve them, but the bulls defy him to enter the market, for they are prepared to buy up all the gold that he can spare, and then send the price as high as they please. There is consternation among all who require gold, and as many of the heavy transactions in foreign merchandise are for gold, importers as well as shorts are fairly cornered.

“Now this bull movement was predicted in the New York papers ten days ago, and it has been more than verified, though the end is not yet. People are asking one another what it all means, whether we are on the eve of a war with Spain, or whether some other great calamity is about to burst on the country? It is difficult to make many people believe that it is all a speculative movement.

“The next movement predicted will be a bold attempt to break down the prices of our national securities in Europe, with the view of bringing the Secretary of the Treasury under the influence of foreign bankers, and to drive him from his present policy—while, of course, the operators calculate to make money by their policy.”

The assistant Treasurer declined postponing sale of gold but will make no awards until the bids are telegraphed to Boutwell. The amount of purchasers of bonds will not exceed amount of gold sold.

The smoke of the battle-field lifting—partial list of the killed and wounded—the operations of Monday.

The effects of Friday’s great bull movement in gold in New York are very serious to the army of speculators, and it is still impossible to get full lists of those who have gone overboard, but that the list is quite large and includes some large and old operators. It is quite certain that some old gamblers got enough last week to last them a lifetime. The New York parties who gained the disgraceful notoriety of producing the “corner” in gold, are Wm. Woodward, Jay Gould, Marvin, Bros. & Co., Smith, Gould, Martin & Co., and James Fisk, Jr. A victim of the gold swindle dealt James Fisk, Jr., a heavy blow in the face Friday night. Threats were freely made of hanging him and Judge Barnard.

The dead lock in the Gold Exchange Bank continues, and has brought the Gold Room to a standstill and checked foreign exchanges. The Express says: “It is openly charged that the bank on Friday and Saturday made partial settlements with some large parties, but small parties, who in the aggregate had large balances due them, and who were known to be solvent, could not obtain even a partial settlement. This has thrown into the money market a perfect army of small borrowers, and greatly aggravated the stringency in money since Thursday last.” The members of the Gold Room re-assembled at one o’clock, when there was a renewal of the confusion and excitement of the morning. The Committee of nine stated that they had got the Gold Exchange Bank to postpone the declaration of any more defaulters until 2 pm, and they also suggested that a committee of four be appointed to wait upon the Bank of New York and see if that institution would assist in clearing the gold operations of Friday, owing to the fact that the Gold Exchange Bank has not yet got through with Thursday’s operations. A member stated that a policeman in the Gold Exchange Bank had ordered him out, when he endeavored to find out how he stood. He said that it was high time that we knew whether the bank has any responsibility and where it stands.

The feeling at this juncture ran very high, and the Gold Exchange Bank was alluded to in the debate in anything but complimentary terms. A resolution was offered that the non-compliance of the Gold Exchange Bank to take up the gold of Belden & Co., shall not work the suspension of any member of this body. This was lost by a very decided vote. A letter was read from Wm. F. Livermore & Co., giving notice that their outstanding transactions were all to the account of Wm. Heath & Co., Smith Gould, Martin & Co., and James Fiske, Jr. The letter was ordered on file. A resolution was adopted instructing a committee of nine to return to the Gold Exchange Bank, and if they were not able to receive the assistance of the bank officers, to ascertain what they could of Belden’s affairs and report to the board as early as possible. During the discussion, Mr. Millbank who acted as Belden’s clerk on Thursday, said he distinctly recollected that the amount which was handed in on Blenden’s account was on the debit side $3,770,000, and on the credit side $3,755,000. From this it would seem that his indebtedness to the bank was $15,000, in gold. This must have been Wednesday’s business. The board then took another recess until 3 o’clock.

At 3 o’clock there was comparatively but a small attendance as it was generally understood that the committee would not make a report. The committee appointed to ascertain the condition of Belden & Co. with the Gold Exchange Bank said they were unable to make any report as the bank had not yet concluded Thursday’s business. Finally the Board adjourned until 10 o’clock tomorrow morning. The Courts are at work and injunctions were flying among the brokers and the Gold Exchange Bank this afternoon.

The Street price of gold is $1.35. The committee appointed Saturday night to investigate the affairs of the Gold Exchange Bank, reported that sales of gold be suspended to September 28th. A long and rather exciting debate followed, during which Mr. Brown alluded to operations of Thursday and Friday, as conducted by financial ruffians, and the transactions for last week were directly traceable to the clique of financial ruffians, as he was pleased to call the late bulls in gold. His remarks were received with mingled hisses and cheers, and confusion finally drowned his voice. It was resolved that a committee be appointed to settle outstanding contracts. The list of those who failed to make their balances good at the bank were notified to make their accounts good, but nothing is publicly known thereof as yet. Mr. Callender, the national examiner, states that every bank in the city is in sound condition. Also, that the Tenth National Bank is credited at the clearinghouse for over half a million.

The California Fractional Gold Coin shows against a artist’s portrayal of Black Friday, circa 1869. 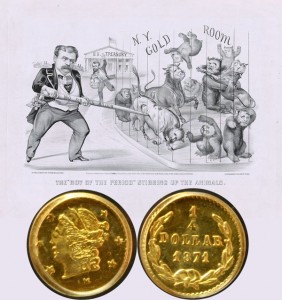