Today, the Pilgrim Tercentenary Commemorative Silver Half Dollar Coin remembers when the pilgrims from the leaky Speedwell arrived at Plymouth a year later in the Fortune.

In particular, one man who had been important in negotiating on the pilgrim’s behalf arrived that day but soon returned to England to continue his efforts.

From The Real America in Romance, On Savage Shores, The Age of Consolidation, 1620-1643, edited by Edwin Markham, published in 1914:

Thus it appears that the Pilgrims were fortunate in selecting Patuxet for their habitation, severe though their trials were.

When the autumn of 1621 came, the rafters of Matthew Stevens’s hut were hung thickly with golden ears of corn — his share of the general harvest.

There were beans, barley, and peas in lesser quantities, and, as Bradford contentedly put it, “of all things plenty.”

With the abundance of wild game and fish, the humble wants of the Pilgrims were satisfied, and the outlook for the winter was encouraging.

Through a coincidence, she anchored off Cape Cod on the anniversary of the day the Mayﬂower dropped anchor there, November 9.

Most prominent among her passengers was Robert Cushman, a Separatist leader who had started for America at the time the Mayﬂower and Speedwell put out from England, but was one of those left behind when the Speedwell was abandoned.

Cushman had been conspicuous as an agent of the Pilgrims from Holland to England during the negotiations for a charter.

He returned to England on the same ship, fourteen days later, to report to the English company.

Most of the newcomers were lusty young men, and they were welcome, despite the fact that the whole party had to be put on half rations for six months, since the Fortune had brought no supplies.

The Guide to Plymouth, And Recollections of the Pilgrims by William Shaw Russell, published in 1846 provided a brief biography of Robert Cushman, an important but not as well-remembered pilgrim.

Mr. Cushman was a member of the Leyden Church, and was twice appointed as their agent to negotiate with the “Virginia company,” and see if the King would give them liberty of conscience there, under the royal seal; — and a third time was sent to England from Leyden, to receive money of the merchant adventurers of London, previous to the embarkation from Holland, and to provide for the voyage to New England; which he did by procuring the Mayflower and Mr. Clark, the pilot.

Perhaps no individual of the Church possessed in a higher degree the qualifications required for discharging the important duties incident to the trust assigned him.

He embarked in the Mayflower, from Southampton, in company with the Speedwell, which last vessel, after proceeding some leagues to sea, received so much injury, that both ships were compelled to return.

Mr. Cushman remained in England to keep together those that were left behind, owing to the accident to the smaller vessel; and afterwards in 1621 came over in the Fortune.

He brought with him his only son, Thomas, then 14 years of age.

He returned to England on business of the Colony, in the Fortune, Dec. 10, 1621, and never afterwards visited the country.

He was actively engaged in promoting the interests of the colony, particularly in relation to the discontent which was soon manifested among the merchant adventurers.

His correspondence with Gov. Bradford indicates his ability, and his efforts contributed largely to the arrangements which eventually dissolved the perplexing connection between them and the pilgrims.

While in Plymouth he delivered a sermon on the duties of self-denial — the first ever printed of those delivered in New England.

He died in the year 1626, an event deeply lamented at the time, — an irreparable loss to the colony; which event is thus mentioned by Gov. Bradford:

“Our captain also brings us notice of the death of our ancient friend, Mr. Cushman, who was our right hand with the adventurers, and for divers years has managed all our business with them to our great advantage.”

His son Thomas was educated by Gov. Bradford, and was chosen Elder of the Church, on the death of Elder Brewster, and was ordained to that office April 6, 1649.

His children, as shown by his will and otherwise, were Thomas, Isaac, Elkanah, Fear, Eleazer, Sarah Hook, and Mary Harlow. Isaac was settled in the ministry at Plympton, October 27th, 1698. 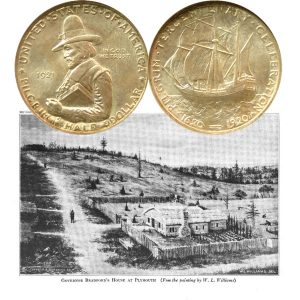