Today, the Shield Nickel Coin remembers the first lighting of the Brush electric lights along Broadway in New York on December 20, 1880.

Lights for a Great City.

Broadway illuminated for three quarters of a mile—interesting effect produced—how the turning on was done—lamps still burning yesterday morning.

The lighting of Broadway from Fourteenth to Twenty-sixth street by the Brush electric-light system was successfully accomplished Monday evening.

The tall lamp-posts of corrugated iron, double the height of ordinary street lamps, had been let up in complete order for use at intervals of a block, on alternate sides of the street, from the lower end of Union Square to opposite Delmonico’s, and to give additional éclât to the illumination, the two large clustered gas-Jets on Madison Square were each topped by Brush electric lamp, the volume of its single light alone being equal to ten times that of the half-dozen coal-gas burners below.

Half past 5 had been fixed as the hour of lighting up, and long before that time all the necessary preparations had been made, so that nothing more was necessary than to turn the small wheel attached to the large generator in the Twenty-fifth street building, and allow the electric current to complete its work.

It had been arranged beforehand that Miss Hayes, the little daughter of Mr. A. A. Hayes, Jr., the secretary and treasurer of the company, should turn it at the appointed moment, and a crowd had gathered at the headquarters building, No. 133 west Twenty-fifth street, to witness the ceremony.

At the last moment, however. Mr. Hayes changed his mind, and it was thought best to let Steam-Engineer W. H. McGrath, who has superintended the putting up of the company’s steam apparatus, perform the duty.

At 5:27 everything was in readiness, and Mr. Hayes, who, with General-Superintendent R. J. Sheehan and other officials had stationed himself in the generating-room, gave the order to “turn on.”

At the word Engineer McGrath grasped the small-wheel lever, gave it a twist, and almost instantaneously the bright white jets along Broadway began to flame out like stars emerging from the darkness.

First, there was seen a row of small white dots scattered along the street, growing in size each instant until after the lapse of a few minutes they had developed into large, powerful electric jets, burning somewhat irregularly at first, but soon settling down into a white, steady glare, that neither increased nor diminished in size, but burned with equal Intensity through the hours of the night.

The ease and accuracy with which the extensive circuit was completed, and all the lamps were set burning instantaneously, was most noteworthy.

The southernmost lamp is at the extreme south corner of Union Square. An observer in the office of the company, at Broadway and Seventeenth street, stood with a stopwatch in his band watching this light.

A few seconds after 5:27 the light flared out in the southwest corner of the Square—4000 feet from the generators in west Twenty-fifth street—and at the same Instant every lamp along Broadway for three quarters of a mile appeared illuminated.

The white dots broke out, not one after another, but instantaneously, as though a long train of powder had been fired.

The light not only burned brightly and powerfully, but seemed to increase in intensity as the night wore on, and the massive Corliss engine and generators in Twenty-fifth street were worked up to their full power.

The impression made upon the passers-by was varied, but generally favorable. The fashionable shopping district was crowded with thousands buying holiday presents and gazing at the illuminated shop-windows stored with Christmas treasures of all sorts. Few persons apparently remembered that the lights were to be turned on, and the moment the dazzling electric sparks appeared, there was a general turning from the shop-windows to the lights.

Exclamations of admiration and approval were heard on all sides, together with calculations as to the effect upon the gas companies, and the possible downfall of these monopolies as the result.

The best effect of the lamps was to be seen immediately under them, where the ground glass of the bottom of the globes intercepted the intense rays and created a comparative shadow, from which the effect and brilliancy of the illuminated circle outside could be better appreciated.

From this stand-point, as from a cave, the effect of the interne light outside was most perceptible.

Horses, street-cars, omnibuses, and passing pedestrians were lighted up with a brilliancy which, though by no means equal to the “light of day,” was sufficiently strong for all practical purposes.

Signs on the stores could be read at a great distance, and fine type could be readily perused 100 to 150 feet away.

The artistic effects of strong contrasts in light and shade were numerous. A pair of white horses attached to an elegant private carriage outside of Tiffany’s was illuminated with a degree of brilliancy which, contrasted with the deep black outline beyond, formed a picture.

The great white outlines of the marble stores, the mazes of wires overhead, the throng of moving vehicles, were all brought out with an accuracy and exactness that left little to be desired in the matter of strength.

Like all electric lights, there was a certain intensity about the powerful white rays which, to unaccustomed gazers and persons with weak eyes, somewhat detracted from the pleasure of the illumination.

This, however, will be modified by time and by constant use, while the possibilities of strengthening and softening the rays by the use of ground porcelain or colored glass are such that almost any effect may be produced.

As it was last night, the eye, after resting for a time on the dazzling brilliancy of the fierce white jets turned with relief to the mellow golden color which the street lamps and shop-windows assumed by contrast.

On the grouped burners in Madison Square, with their rows of gas-lights below, and the single electric flame above, this contrast was particularly impressive.

Viewed from afar it suggested a circlet of golden gems surmounted by a dazzling white diamond.

At the Central Station, or Headquarters, in Twenty-fifth street, thirteen additional lights were burning besides the fifteen on Broadway, and five more elsewhere.

This was done for the purpose of fully testing the machinery and running the engines and generators to their full capacity.

There were two dynamo-electric generators side by side, the first of which supplied the Broadway circuit, and the second the Fifth-Regiment armory and the circle of thirteen lights burning in the building. There was also a test light attached to the first generator which showed the exact degree of Intensity with which the Broadway jets were kept burning.

As the light from each one of the dozen or more jets in the room was stated by the engineer as equal to one-thousand-candle power, the overpowering effect of the assembled group drove all but those with the strongest eyesight from the room.

The eyes of the engineer and attendants were weak and watery alter four hours of work amid such an intense illumination.

In the Fifth-Regiment armory, where a fair was in progress, four of the jets were put up in the corners of the room, the entire work, including putting up the wires and attaching them to the circuit, having been performed after 11 o’clock in the forenoon.

During the evening Secretary A. A. Hayes, Jr., General-Superintendent Sheehy (who has sole charge of the electrical engineering), and other officials of the company, gathered in the office, No. 860 Broadway, where a large company of guests, including many well known electricians and members of the press, were entertained in a hospitable manner.

Mr. Hayes said that he would not take any of the photometric measurements as to the relative power and intensity of the light in comparison with that of other electric lights and gas until the system had been In successful operation for several days at least.

The observations which it had been announced would be taken at various points along Broadway last night were therefore abandoned.

Mr. Hayed and the other officials of the company were more than satisfied with the light, and were confident that it would speedily come into general use.

At 1 o’clock the electric lights along Broadway were burning at full force, lighting up the deserted streets with unwonted splendor.

Most of the gas-jets along the route had been extinguished, and those that were still burning flickered dismally in the wind.

The Brush carbons, on the contrary, burned clear and strong.

They will be kept lighted regularly from 5:30 in the evening to 6:45 in the morning until further notice.

The Shield Nickel Coin shows with an image of Broadway, circa 1880. 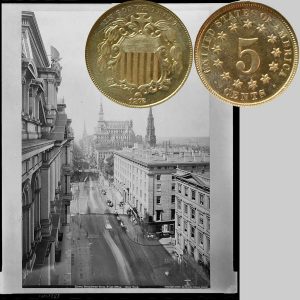