Today, the Eisenhower Dollar Coin remembers that historic day 46 years ago when Neil Armstrong and Buzz Aldrin made their adventurous first steps on the moon.

Newspapers around the world printed many stories about the astronauts and their activities that day.

The Rome [GA] News-Tribune printed several of those stories with one focused on their “prospecting.”

The Apollo astronauts struck paydirt in their prospecting on the moon.

Their luck especially was in finding a great variety of different rocks, which could tell much about the moon’s age and origin.

They saw a curious purple rock and perhaps put it in one of the two treasure chests they are bringing home.

And they cored out a five-inch deep sample of lunar soil that “looks moist,” a suggestion there might be water and so perhaps microscopic life beneath the moon’s surface. But the moist, dark appearance could simply be from tight packing of the particles of material, cautions David McKay, geologist of the Manned Spacecraft Center.

They found the crust of the moon much harder than numerous geologists and astronomers expected they would. It took work to dig out two core samples and to plant the American flag.

They found rocks that look like basalt, born of volcanoes, and rocks resembling biotite, a dark colored mica that usually contains two to four percent water. They found the surface dusty, getting their boots coated cocoa brown with it.

They set up a seismometer which soon was recording moon tremors, although these might be only from the footsteps of the astronauts, especially when they cavorted on the desert-like moon like kids in a playground.

If the moon still shimmies after they leave today, scientists think the ultra-sensitive instruments can tell them if the quakes come from volcanic activity or hits by meteorites.

Incredibly calm most of the time, the astronauts performed well their role as good observers specially trained in geology.

Medically, their excursion showed the moon to be not so fearful a place as cautious planners had had to paint it.

The men surprised doctors and others by their quick adaptation to the moon’s low gravity. Their energy expenditure in their tasks was within the limits shown in their earth training, said Dr. Willard R. Hawkins, a flight surgeon.

Once, Neil Armstrong’s heartbeat rose to 160 per minute, but this was called not critical, and Clifford Charlesworth, flight director, said it occurred when he was doing his hardest labors.

There were no indications the astronauts were hit by tiny micrometeorites.

Scientists were particularly delighted that the astronauts landed in an area with a great variety of rock types, as Edwin Aldrin described it.

“Landing near a crater is an unusual opportunity to collect rock samples which come from considerable depths (thrown out by meteoric impact) in comparison to the surface rocks,” said Dr. Gerard P. Kuiper of the University of Arizona Lunar and Planetary Laboratory in Flagstaff. “This is an opportunity to pick up lunar lava in a scientifically perfect spot.”

The Eisenhower Dollar Coin with its Apollo 11 mission patch reverse shows against a NASA image of one of Buzz Aldrin’s footprints on the moon from July 20, 1969. 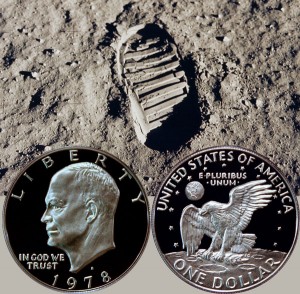