Today, the Eisenhower One Dollar Coin remembers the perseverance of Professor Asaph Hall and his discovery of the Mars moons, Deimos and Phobos, beginning on August 11, 1877.

From the Fortnightly Review of August 1907, an excerpt of an article by E. Vincent Heward tells of the Professor’s discovery:

Professor Asaph Hall, of the Washington Observatory, had the good fortune to set at rest the question of the existence or non-existence of Martian moons.

Favored with a more excellent telescope than Europe could boast, he took advantage of the planet’s nearness to the earth — the second nearest approach —which occurred in August, 1877, to give a critical examination to its surrounding.

He had not long to wait for enlightenment.

On August 11th he detected a suspicious-looking object — a mere speck of light — hovering about the eastern edge of the planet, but he did not feel sure that what he saw was really a satellite. It might be one of the minor planets hundreds of which are floating in the wide space between Mars and Jupiter.

Cloudy weather prevented further observation until the night of the 16th, when he again caught sight of the same object.

Two hours’ attentive watching sufficed to show him that it followed the planet’s orbital motion.

Yet, to make assurance doubly sure, he waited another opportunity for further examination.

Meanwhile, he made a rough calculation based upon the position of the new body in relation to Mars and his mass, from which he deduced a period of revolution, if it were really a satellite, of about twenty-nine hours, and he concluded that it would be hidden from view most of the following night, but would return to its first position towards morning.

At four o’clock on the morning of the 18th his gladdened eyes were greeted with a fair view of the little stranger exactly at the point his calculation had indicated.

And more wonderful still another appeared, like the first one, revolving swiftly about the primary.

But the rapid movement of the inner satellite puzzled Mr. Hall not a little; it appeared and disappeared so quickly that he thought there must surely be a troop of celestial bodies circling in giddy flight about Mars.

To satisfy himself on the point he kept a close watch on their movements throughout the nights of the 20th and 21st, but no more than two could be seen.

He found, however, that the inner one presented the unique example of a satellite revolving about its primary nearly three times as swiftly as the planet rotates on its axis.

These new found members of the Martian family are so small that they may without exaggeration be classed with the larger order of meteorites.

Had Mars owned a satellite even a quarter the size of our moon it would in all probability have been discovered a century earlier by the elder Herschel, at the time when he entered upon his systematic survey of the planets.

Professor Pickering, from careful photometric observations, has assigned to these moons diameters of six and seven miles respectively.

The outermost completes its journey round Mars in thirty hours, seventeen minutes, fifty-four seconds at a distance from his surface of 12,500 miles, while the innermost takes but seven hours thirty- nine minutes twenty-two seconds to perform the same task at its lesser distance of 3,760 miles.

Comparing this short distance with the 240,000 miles which separate our moon from the earth we realize that if there be intelligent beings on Mars possessed of eyes and optical instruments like ours they will have no difficulty in making out whether their moons are inhabited or not.

Physically considered, it is impossible for such small worlds to have an atmosphere.

Within latitudes 69° north or south of the equator they would always have in view the remarkable spectacle of the inner satellite rising apparently in the west, setting in the east, and on its eastward way meeting and passing the outer one, going through all its phases in about eleven hours.

But an Adams or a Leverrier is needed to solve the problem of the movement and history of the inner satellite.

It is the only known instance of an attendant moon circling more swiftly than its primary rotates.

Can it be a captured planetoid?

Is it destined to fall upon Mars?

Let there be a reactive pull, or a resisting medium, however feeble, and a catastrophe of the kind would seem to be inevitable, though remote.

The important function of naming the “little strangers” gave a pleasing fillip to the astronomers of Europe and America.

No more appropriate designations could well have been thought of than those happily suggested by Mr. Maden, of Eton, which Professor Hall bestowed upon the foundlings.

Accordingly, they stand recorded in the annals of the science under the names of 1 (the outermost), Deimos; and 2 (the innermost), Phobos: names taken from the Iliad (Book xv.), where Mars is represented descending on the earth in order to avenge the death of his son Ascalaphus:

Mars spake, and summon’d Fear and Flight to yoke
His steeds, and put his glorious armour on.

The Eisenhower One Dollar Coin shows with an image of Professor Asaph Hall. 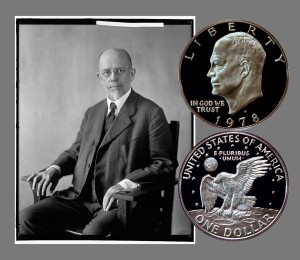