The following day, The Daily Alta California newspaper published comments about the solar eclipse from various parts of the country:

THE ECLIPSE. Observations of Scientific Parties in Wyoming and Colorado.

Denver, Colorado, July 29th. — The sky was entirely clear until 1 p.m., when a few masses of cumulous clouds showed themselves over the mountains toward the north and westward.

With these exceptions, the sky was perfect and the atmospheric conditions of a most favorable character for the successful observation of the eclipse.

The house-tops were thronged with people, the higher buildings being especially in demand, as from them the approach of the dark shadow of totality could be seen as it swept onward over the plain.

The time of the first contact was 2:20, Denver time, and ten minutes later the presence of the moon at the edge of the sun’s disc was plainly perceptible to ordinary observers with smoked glass.

By 3 o’clock the sunlight had moderated in a marked degree, showing a pale yellow color.

Later on, a lurid glare overspread the earth, the heat of the sun was no longer oppressive, and a light similar to twilight was shown in the horizon, and the light flecks of clouds began slowly to dissolve, owing to the change of temperature.

As the period of totality came on, the sight from an elevated station was grand.

To the northeastward, gray clouds could be seen bathed In sunlight, and presenting a view of a beautiful sunset.

During the period of obscuration, the moon appeared like a huge black bill surrounded by a beautiful circle of light, and as the sunlight suddenly burst forth again, the chickens crowed as though morning had dawned.

New Orleans — Clouds prevented the observation of the eclipse.

The astronomical parties, as far as heard from, failed to discover the planet Vulcan, although able to discern stars of the sixth magnitude.

Professor Young reported that he discovered no ultra red or ultra violet lines, but that at the moment of totality all the Fraunshofer lines were beautifully reversed.

This was the most important result of his observation, and confirms the observations made in Siam.

Edison’s tasimeter failed to work satisfactorily, and he used a thermopyle, which caused an unsteady motion in the galvanometer.

Professor Colbert reports that his observations tend to show that the moon’s path in the heavens lay a little farther to the southward than indicated by the lunar tables, or else that the estimate of the moon’s diameter is too large; perhaps both.

The measures made by Mr. Easterday Indicated that the corona extended out on an average about 26′ of an arc, corresponding to a distance of fully 700,000 miles around the sun.

It was strongly striated, and in the direction of the ecliptic the rays were nearly straight, while above and below that line they were markedly spiral in their character, and some of the lines at the base formed an angle of not less than 30⁰, with a prolongation of the sun’s rays.

The chromosphere was distinctly seen by Professor Hough, indicating a thickness of some 2000 miles.

The protuberances were much less prominent than at most of the recent eclipses.

Two rather pale ones were seen on the western side of the moon.

Mr. Thomas also saw lines 1474, but did not discover any new lines.

The temperature during the eclipse is reported by the Signal Service as follows:

At Idaho Springs two observations were made by Professor Eaton of Packer Institute, and S.V. White, of Brooklyn, NY.

The day was cloudless. Numerous sketches of the corona were made. There was an entire absence of the pink flame usually seen during total eclipses.

At Central City were stationed Professor Holder and Professor Campton. Numerous drawings were made of the corona, but no report of the scientific results has been received.

Winnemucca, Nevada — The eclipse commenced about 1:15 pm and ended about 3:35.

The greatest obscuration was from 2:15 to 2:30, when the sun was more than half covered.

The atmosphere was hazy before noon and the dull light caused by the eclipse made it appear more so during the phenomena.

The mercury fell from 91⁰ to 85⁰ during the passage, and when the sun appeared in full view, the thermometer read 85.5⁰.

Lake Charles, Louisiana —The eclipse began at 2:45 pm and ended at 4:45. The total eclipse occurred at 3:40 pm and lasted one minute.

Clouds occasionally obscured the sun, but the view at the commencement, for most of the duration, and for the last half hour was wholly unobscured.

At the moment of total obscuration, a match had to be lighted to note the hour on the clock.

During the following minute a perceptible halo ringed the moon, the surface of the latter looking like bluish steel. No perturbation was evinced by animals.

Fort Worth —The observation of the eclipse was successful.

The observations was taken with twenty instruments, securing notes of the corona, cuspis, moon limbs, and all the contacts but the last, which heavy clouds rendered partially a failure. Five photographs were obtained.

The totality lasted 2 minutes and 42 seconds.

Specials from Waco, Palestine, Orange and other points state that successful observations were taken at these places.

Fort Worth, Texas — Complete apparatus, good weather and skillful operators, with assistants, secured a successful observation, resulting in obtaining many points regarded by observers as valuable in scientific calculations in connection with determining the problem of Solar Eclipse.

A fair drawing of the eclipse and corona and photographs of the moon were obtained.

The temperature changed 18 degrees during the observation.

Cincinnati — Clouds prevented the observation of the eclipse.

Rawlins —The weather here today was fine, the sky clear, and the observation a perfect success.

Edison’s experiments with the tasimeter were quite satisfactory.

Dr. Draper, of New York, succeeded in obtaining several photographs of the sun during the eclipse.

Professor Watson discovered an inter-mercurial planet of the size of a four-and-a-half magnitude star, about two and a half degrees southwest of the sun.

Mr. Lockyear says this eclipse was totally different, the corona being ten times brighter this time than the one in 1871, showing a great variation of the brightness of the corona between the maximum and minimum period of sunspots.

He obtained a faint photograph of the continuous spectrum of the sun, and saw no trace of lines or rings through Mr. Rutherford’s grading.

The structure of the corona was well observed by him, but no trace of an exterior ring was seen, and the corona vanished instantly, while in 1871 it remained visible for several minutes.

After totality only one faint protuberance was observed by Mr. Lockyear.

He is greatly surprised at the difference of eclipses occurring in different sunspot periods, and at the intimate relation of the brightness of the corona to sunspots.

The Eisenhower Dollar Coin shows with an image, circa 2007, of the Solar Eclipse oil painting on the second floor rotunda ceiling of the U.S. Custom House in Philadelphia. 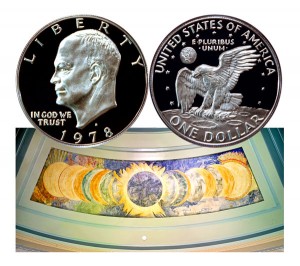