Today, the Albany Commemorative Silver Half Dollar Coin remembers the office of Governor Dongan and his negotiations with the Iroquois on July 30, 1684.

From New York, the planting and the growth of the Empire State by Ellis Henry Roberts, published in 1904:

Thomas Dongan, who was permitted to inaugurate his administration with this gracious act, arrived in New York August 28, 1683, and on the next day the city authorities welcomed him by “a large and plentiful entertainment.”

He was born in 1634, the youngest son of an Irish baronet, was a colonel in the Royal Army, had seen service in France, and been lieutenant governor of Tangiers.

He was a Roman Catholic, and was to prove himself a man of prudence, of loyalty to the colony, and for that period a statesman of foresight as well as of ability.

His commission covered the land to the west side of the Connecticut River, with Pemaquid, Martha’s Vineyard, and Nantucket. His instructions were to call Frederick Phillipse and Stephen van Cortlandt and other “most eminent inhabitants ” as councilors, not exceeding ten in number, and to summon a general assembly, to consist of not more than eighteen persons, to be chosen by all the freeholders.

This assembly was to “have free liberty to consult and debate for all laws,” and its statutes were to be valid unless disapproved by the Duke.

The governor was clothed with authority to establish courts similar to those in England, but the Duke’s command was a condition for waging war, and revenue could be collected only under act of the assembly.

The formal summons for this assembly bears date September 13, 1683, and was addressed to the freeholders of Pemaquid and Martha’s Vineyard as well as of New York, Long Island, Esopus, and Albany.

The assembly met in Fort James, October 17, with Matthias Nicolls as speaker, and a letter from the Duke of York was read.

In a session of three weeks fourteen acts were passed.

By far the most important was “the Charter of Liberties,” in which declaration was made that under the king and lord proprietor “the supreme legislative authority shall forever be and reside in a governor, council, and the people met in a general assembly.”

It was the first time “the people” were recognized “in any constitution in America,” as James when he became king took occasion promptly to point out.

The whole document was in the same free spirit.

It provided in elections for liberty of choice for all freeholders, and for entire freedom in religion. It embodied in plain words the principle that “no aid, tax, custom, loan, benevolence or imposition whatsoever shall be levied within this province upon any pretense, but by the consent of the governor, council and representatives of the people in general assembly.”

An accompanying act granted certain duties on imports to the Duke and his heirs. In no other colony in America had the principle of representation of the people as a condition of taxation been so clearly asserted by statute at that day.

Courts were established and naturalization provided for.

This assembly did its work well and promptly, and set a good example to its successors.

The boundaries of the colony gave Governor Dongan no little trouble.

Its relations with Canada and the Iroquois presented the most serious difficulty.

He met the controversy with courage and foresight, and bore himself well in complex and trying negotiations.

The claim of New York to jurisdiction to Lake Ontario and the St. Lawrence he maintained with persistency, and the purpose to protect and control the red men in this territory was asserted in many forms.

The raids of the Iroquois to the south brought Francis, Lord Howard of Effingham, to confer with the governor of New York, and together they met the chiefs of the Mohawks, Oneidas, Onondagas, and Cayugas in Albany, July 30, 1684.

Stephen van Cortlandt represented Massachusetts in the consultation, which lasted for several days.

The occasion was important, the speeches as they have been preserved were notable and eloquent, and the whole transaction was peculiar and picturesque.

The results were far-reaching and impressive.

The Four Nations represented submitted to King Charles, with the formality of signatures and seals, and the record was made on parchment, to be sent to England.

Tomahawks were buried in behalf of the contracting parties, and “the Indians threw dirt upon them” in sign of enduring peace, and they “sang the Peace Song,” and rejoiced over the treaty.

The arms of the Duke of York were put upon the castles of the Four Nations.

As the negotiations were closing, the Senecas appeared and were included in the adjustment.

The Albany Commemorative Silver Half Dollar Coin shows with a woodcut, circa 1757, of an Iroquois between an Englishman and a Frenchman. 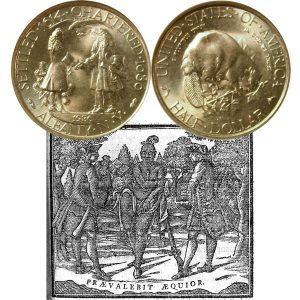