On that day, the US Olympics announced from White Plains, New York:

King, winner of 71 career singles titles including 12 Grand Slam singles, was captain of the Federation Cup team that reached the final last year.

Gullikson, who captained the US Team to the Davis Cup last year, has been a coach in the USTA’s Development Program since 1988.

Later in the month, another news report added:

Former professional players Tom Gullikson and Billie Jean King have been named the men’s and women’s coach for the US Olympic tennis team. The coaches will select top US players for the Olympic team based on world rankings which will be released April 29.

To be eligible to compete in Atlanta, a player must have made themselves eligible to play in the Davis cup or Fed Cup competition for two years between 1993 and 1996. One of the years must be 1995 or 1996.

Prior to the games, the Atlanta Olympic Committee planned and negotiated a new hard court tennis center at Stone Mountain.

For the first time in 1996, the Olympic Games provided a bronze medal in addition to gold and silver for each of the four events—men’s singles, men’s doubles, women’s singles and women’s doubles.

As the host country, the US tennis team won three gold medals during the 1996 Olympic games.

The other ranked nations won:

The XXVI Olympiad Tennis Commemorative Silver Dollar Coin shows against a background of part of a tennis ball. 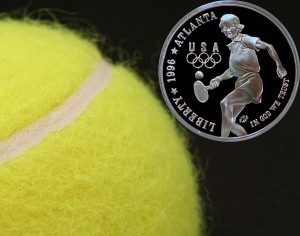