Today, the Civil War Commemorative Half Dollar Coin remembers when the Confederate ram Arkansas traveled to Baton Rouge to join the fight but had to be scuttled on August 6, 1862.

From the War of the Rebellion: A Compilation of the Official Records of the Union and Confederate Armies, prepared by Lieutenant Colonel Robert N. Scott, Third U. S. Artillery, published in 1886:

Captain: I have the honor to report that an attack was made early yesterday morning by a Confederate force of about ten regiments, under command of Maj. Gen. J. C. Breckinridge, and that after a fight of four hours’ duration and of great severity the enemy was repulsed.

I regret to state that Brigadier-General Williams was killed on the field by a rifle-ball through the chest.

During the battle our forces were obliged to retire about a quarter of a mile from our original position, and the enemy were thus able to occupy temporarily the camps of the Twenty- first Indiana, Seventh Vermont, and Fourteenth Maine Regiments, and to destroy much of the baggage and camp equipage.

They were, however, driven out, but our number being much lessened by sickness, and the men on the field being much exhausted by fatigue and heat, it was deemed inexpedient to pursue.

I am unable as yet to give a report of our casualties, which I am sorry to say are considerable.

The enemy has retired several miles, and from all I can learn are still retiring.

I am expecting it possible they may receive re-enforcements, and am disposing my troops in the strongest positions.

Our force engaged numbered less than 2,500.

The enemy had at least 5,000, with twelve or fourteen field pieces and some cavalry.

The ram Arkansas approached with the intention of engaging our gunboats, but grounded above the point at a distance of about 6 miles, and today was engaged by the iron-clad Essex and destroyed.

Enclosed is a copy of a communication received by a flag of truce from Major-General Breckinridge and my reply thereto.

You will see by the latter that Brigadier-General Clark and his aide-de-camp have delivered themselves up as prisoners of war.

I have also fully 70 wounded prisoners, that were left on the field; also about 30 captured.

I would like instructions as to the disposition yon wish made of them.

Some of them express a wish to be paroled.

Sir: I have sent Major De Baun with a flag of truce, with the request that he will be allowed to attend to the burial of our dead who may have been left within your lines.

Major Haynes, accompanying, desires to communicate with Brig. Gen. Charles Clark, that he may supply him with money and clothing and such articles as may contribute to his comfort.

To:  Commanding Officer of the U. S. Forces, Baton Rouge, La.

General: In reply to your communication of this morning, under a flag of truce, I have the honor to say that we are now engaged in the burial of your dead within our lines and that we shall soon finish the now nearly accomplished work.

General Clark and his aide-de-camp, Lieutenant Yerger, have surrendered themselves as prisoners of war, and are being cared for by our surgeons.

A friend of General Clark from this city will attend to his pecuniary wants.

At the time, some reports stated the USS Essex destroyed the CSS Arkansas, however after the fact, the naval officers stated that they had engine trouble and scuttled the ship rather than have her captured.

The Civil War Commemorative Half Dollar Coin shows with an artist’s image of the CSS Arkansas burning. 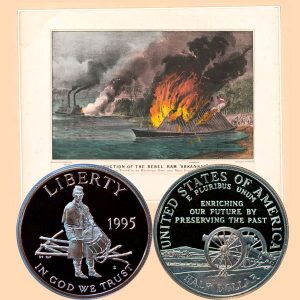