Today, the Denali America the Beautiful Quarter Coin remembers the achievement of four local men who arrived on the summit April 3, 1910.

They began their climb because many people did not believe Dr. Cook, who claimed he had climbed the mountain.

Looking at the historical notes, some do not believe the claims of this expedition either and show another, later expedition as being the first to climb the mountain.

Others, though, give these men credit for their climb yet do not attribute any scientific success simply because they did not have the scientific gear to record their ascent.

From the Press Democrat printed April 13, 1910 in Santa Rosa, California:

No Traces Of Cook’s Trip Were Seen

Fairbanks Expedition to Top of Mt. McKinley Reports Having Reached Summit on April 3, After Month’s Climb

Fairbanks, Alaska, April 12—The Fairbanks expedition to Mount McKinley, the tallest peak in North America, reached the summit April 3, after a climb of one month from the base.

No traces of Dr. Frederick A. Cook’s alleged ascent were found, reports Thomas Lloyd, leader of the expedition, who arrived here last night. His companions ware Daniel Patterson, W. R. Taylor and Charles McGonnigle, and all reached the top of the great mountain.

The expedition, which left Fairbanks December 15, while the controversy over Dr. Cook’s disputed ascent was still raging, was financed by Gus Peterson and William McPhee.

The expedition was provided with Dr. Cook’s maps and book, and endeavored to follow his alleged route, but utterly failed to verify any part of his story of an ascent.

The final dash to the top was made from the 16,000-foot camp. Mount McKinley terminates in twin peaks of equal height, one somewhat rounded and covered with snow, the other composed of bare, windswept rocks. On the rock-peak the Fairbanks climbers placed an American flag in a monument of stones.

The Literary Digest published the following in their April 23, 1910 issue:

“The brass tube was not there. Dr. Cook’s memory must have been at fault,” remarks the New York Times, commenting on the announcement from Fairbanks, Alaska, that a local expedition had reached the top of the highest peak in North America.

The dispatch tells us that the expedition, under the leadership of Thomas Lloyd, left Fairbanks on December 15, and reached the summit of Mount McKinley on April 3, the actual ascent of the mountain having occupied thirty days.

According to the Associated Press dispatch, “no traces of Dr. Frederick A. Cook’s alleged ascent were found.”

At the same time we are informed that “the obstacles encountered were not so great as had been predicted.”

The three men who reached the summit with Mr. Lloyd are William R. Taylor, Charles McGonigle, and another, whose name appears in some dispatches as Daniel Patterson, in others as Peter Anderson.

It is “proved absolutely,” asserts E. W. Griffin, chairman of the committee that financed the Lloyd expedition, that Dr. Cook “never reached the summit.”

And he adds that “the photos and other proofs of Cook’s failure are in course of preparation and collaboration.”

A later Fairbanks dispatch to The Sun tells us that, “according to the aneroid readings of the Lloyd party, Mount McKinley is 20,500 feet high, and it terminates in two peaks utterly unlike anything pictured by Dr. Cook.”

Captain Osbon is thus quoted in the New York American:

“I am not surprised that the Fairbanks expedition did not find Dr. Cook’s records on the top of Mount McKinley. They were left there four years ago, and doubtless they have been buried under snow or swept away by Arctic storms. The report of the Fairbanks party that they found an easy way to the summit, to my mind, corroborates Dr. Cook’s story of his ascent. I feel positive that Dr. Cook not only scaled Mount McKinley, but also discovered the North Pole.”

In the Associated Press dispatch announcing the conquest of the peak we read:

“Four camps were established in the course of the ascent, and a trail was blazed all the way to the crest. Up to 12,000 feet the climbing did not present unusual difficulties. For the next 4,000 feet the way led over a steep ice-field, which at first seemed to forbid farther progress, but across which, upon exploration, it was found possible to make a path.

“Mount McKinley terminates in two peaks of equal height, one somewhat rounded and covered with snow, the other composed of bare and wind-swept rocks. On the rock peak the Fairbanks climbers placed an American flag in a monument of stones.

“The expedition, which was provided with Dr. Cook’s maps and data, endeavored to follow his supposed route, but utterly failed to verify any part of his story of an ascent.”

For the most part this news seems to have left the editorial commentators entirely unmoved.

The Times, however, comments somewhat languidly as follows:

“It is unfortunate, it is distinctly unpleasant, that an impostor even of the unparalleled audacity of Dr. Cook should be able to becloud two very remarkable and heroic feats of exploration and discovery. We suppose those who believe in Cook—there are a few of them left—will still insist that, with inconceivable malignity, Lloyd, Patterson, Taylor, and McGonigle, the members of the expedition that has just reached the top of McKinley, really found the tube, but have conspired to keep silent about it, just as they will insist that Cook reached the Pole, tho Peary never went anywhere near it. So the first inquiry as to the scaling of Mount McKinley is not of the dangers and adventures of the party, but, Did they find the brass tube?”

The Springfield Republican, for a long time the most conspicuous of Cook’s newspaper champions, hopes that “the daring climbers of Mount McKinley have come back fortified with affidavits, photographs, maps, scientific observations, and all the other apparatus needed to clinch their claims,” because “the country could hardly endure so soon the long agony of another controversy.”

The Denali America the Beautiful Quarter Coin shows with an image of the mountain, circa early 1900s. 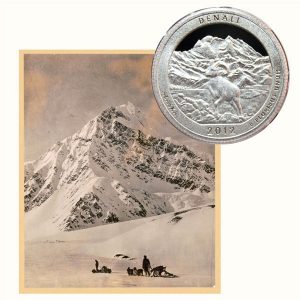