Today, the Louisiana State Quarter Coin remembers the bravery of the men on the schooner Carolina and their success of December 23, 1814 and her subsequent destruction by the enemy just days later on December 27.

The only vessels in this region now remaining to the Americans were the Louisiana, Lieutenant C. B. Thompson, purchased for the emergency and armed with sixteen long 24-pounders, and the 14-gun schooner Carolina.

On the night of December 23d, when the British army was encamped near the river, the Carolina, Master-Commandant Daniel T. Patterson, quietly worked up the Mississippi and took a position on the left flank of the British army.

“A little before eight o’clock,” says an Englishman who was in the expedition, “the attention of some was drawn to a large vessel which seemed to be stealing up the river until she came opposite to the British stations, when her anchor was dropped and her sails were leisurely furled.

“Various were the opinions entertained of this stranger. She was hailed, but no answer was returned; all idea of sleep, however, was now laid aside, and several musket shots were fired, of which not the slightest notice was taken, until at length, all her sails being fastened and her broadsides swung toward our camp, a voice was distinctly heard exclaiming, ‘Give them this in honor of America!’

“The flashes of her guns instantly followed, and a shower of grapeshot swept down numbers among the British troops. An incessant cannonade was then kept up, which could not be silenced, for our people had no artillery, and a few rockets that were discharged deviated so much from their object as to afford only amusement for the enemy.

“Under such circumstances, therefore, all were ordered to leave their fires and shelter themselves under the dikes, where they lay each as he could find room, listening in painful silence to the iron hail among the boats and to the shrieks and groans of those that were wounded.

“The night was dark as pitch, the fires were all extinguished, and not an object was visible, except during momentary flashes of the guns, when a straggling fire called attention toward our piquets, as if some still more dreadful scene was about to open; nor was it long before suspense was cut short by a tremendous yell and a semicircular blaze of musketry, which showed that our position was surrounded by a superior force, and that no alternative remained but to surrender or drive back the assailants.

“The first of these plans was instantly rejected, for our troops, rushing from their lurking places and dashing through their bivouac, under heavy discharges from the vessel, lost not a moment in attacking the foe without the slightest attention to order or the rules of disciplined warfare.

“The combat, which was left to individual valor and skill, lasted till three in the morning, and though the enemy was finally repulsed, no less than five hundred of our finest troops and best officers were left on the field.

“The rest then retired to their former hiding-places, to be out of reach of their enemy on the river, which, when daylight appeared, was discovered to be a fine schooner of eighteen guns, crowded with troops.

“In the cold dikes, however, our men were compelled to remain the whole ensuing day, without fire and without food, for whenever the smallest number began to steal away from shelter the vessel opened her fire.”

On the morning of the 27th the enemy opened on the Carolina with hot shot and shell, and the current was so strong that the schooner could not be brought out of range, not even by warping.

After returning the cannonade with the only gun that could be brought to bear, she was abandoned and fired.

The gallantry of Lieutenants Otho Norris and Charles E. Crowley and Sailing- Master Halter was highly spoken of by Master-Commandant John D. Henley.

The loss in the Carolina was seven killed or wounded.

In his own words, Captain Henley described the loss.

From The Naval Monument, Containing Official and Other Accounts of All the Battles Fought Between the Navies of the United States and Great Britain During the Late War by Abel Bowen, published in 1838:

Loss of U. S. Schooner Carolina.

I have the honor to inform you, that after you left here on the 26th inst, in pursuance to your order, every possible exertion was made to move the schooner Carolina higher up the river, and near Gen. Jack son’s camp, without success; the wind being at N. N. W. and blowing fresh, and too scant to get under way, and the current too rapid to move her by warping, which I had endeavored to do with my crew.

At day light, on the morning of the 27th, the enemy opened upon the Carolina a battery of five guns, from which they threw shells and hot shot; we returned their fire with the long 12 pounder, the only gun on board, which could reach across the river.

The air being light rendered it impossible to get under way. Finding the vessels in a sinking condition, expecting every minute she would blow up, at a little after sunrise I reluctantly gave orders for the crew to abandon her, which was effected with the loss of one killed and six wounded.

A short time after I had succeeded in getting the crew on shore, I had the extreme mortification of seeing her blow up.

It affords me great pleasure to acknowledge the able assistance I received from Lieuts. Norris and Crowley and Sailing Master Hatter, and to say that my officers and crew behaved on this occasion as well as on the 23d, when under your own eye, in a most gallant manner.

The Louisiana State Quarter Coin shows with a map of the area, circa 1815. 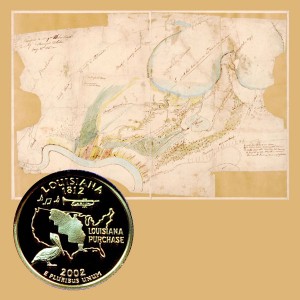