Today, the Rhode Island State Quarter Coin remembers the chase, capture, trial and conviction of the pirates of the Ranger on July 12, 1723.

From the Political State of Great Britain for the Month of July, 1723, compiled and collected by Mr. Boyer, published in London in 1723:

About the beginning of September, we received advice from Newport in Rhode Island, that at a Court of Admiralty held there by his Majesty’s Special Commission, on the 10th, 11th, and 12th of July, 1723, came on the Trial of the Pirates taken by Capt. Peter Solgard, Commander of his Majesty’s Ship the Greyhound.

A description of the chase and capture of the pirates found in the Rhode Island Historical Tracts, No. 13, published in 1881:

Mr. Updike also reprinted in this book the very rare account of the Trial, which was printed at the time.

“Two Pirate sloops, the Ranger and the Fortune, which had committed various piracies on the high seas, being in company, on the 8th of May, 1723, captured the ship ‘Amsterdam Merchant,’ John Welland, master, the day after which capture they plundered and sunk the ship.

“On the 6th of June, in latitude 39 (Block Island is in latitude 42) they took a Virginia sloop, rifled her, and let her go. The following day this Virginia sloop fell in with His Majesty’s ship Grey Hound, twenty guns, Captain Solgard, commander, and related the circumstances of their capture and release.

“Captain Solgard sailed immediately in pursuit, and on the 10th came up with the Pirate sloops about fourteen leagues south of the eastern end of Long Island.

“They, mistaking the Grey Hound for a merchant ship, gave chase and soon commenced firing on her, under a black flag; they soon hauled down the black flag and hoisted a red flag.

“The Grey Hound succeeded in capturing one of the sloops, after having seven men wounded. The other sloop escaped.

“The Grey Hound came with the prize into the harbor of Newport, and the pirates, thirty-six in number, were committed for trial. The trial followed on the 10th of July and the following days.

“Twenty-six were sentenced to be hanged. The execution took place on Gravelly Beach, on the 19th July, 1723. The bodies were buried on Goat or Fort Island, between high and low water mark.”

Some additional notes are needed to render this account quite complete. There is a discrepancy between the number of men convicted and sentenced to be hanged as stated in the Trial, and the list of names of the men actually hanged.

The first account numbers twenty-eight, and the last twenty-six. The names of two men who were convicted and sentenced, viz., John Brown and Patrick Cunningham.

There were two men named John Brown; they were denominated “the shortest” and “the tallest”; both were sentenced to be hanged.

Thus it appears twenty-eight were hanged instead of twenty-six. This error in numbers has crept into all Rhode Island histories.

Captain Low had the good fortune to be at the time of the action on board of the “Fortune” and thus escaped capture.

From one of the old Colony cash books may be gathered some curious memoranda connected with this event:

This singular composition leads the editor to reproduce a portion of the Act of Parliament under which the Court was convened.

It directs that the Court shall consist of seven members, to be appointed by the King’s Commission or under the Great Seal of England, or the seal of the Admiralty of England, directed to all or any of the Admirals, Vice-Admirals, Rear-Admirals, Judges of Vice Admiralty, or Commanders of any of His Majesty’s ships of war, and also to all or any such person or persons, officer or officers by name, or for the time being, as His Majesty should think fit to appoint.

Which said Commission shall have full power to commit, and to call and assemble a Court of Admiralty, which Court shall consist of seven persons. If so many of the persons aforesaid cannot conveniently be assembled, that any three of the aforesaid persons (whereof the President or Chief of Some English Factory, or the Governor or Lieutenant Governor, or Member of His Majesty’s Councils in any of the Plantations or Colonies aforesaid, or Commander of one of His Majesty’s ships is always to be one) shall have full power and authority to call and assemble any other persons to make up the number, provided only known Merchants, Factors, Planters, etc., etc., be taken. (Statutes-at-Large, 11, 12; William 3, c. 7, p. 9, 14, 15).

The Rhode Island State Quarter Coin shows with the pages of the Political State of Great Britain with the lists of the Admiralty Commission and the captured pirates of July 1723. 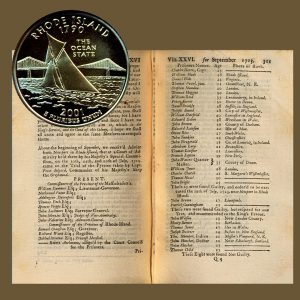