Today, the Congress Commemorative Gold $5 Coin provides the information of how “foreign affairs” became “state” 226 years ago and the initial description of the Secretary of State’s duties.

CHAP. XIV—An Act to provide for the safe-keeping of the Acts, Records and Seal of the United States, and for other purposes.

SEC. 5. And be it further enacted, That the said Secretary shall cause a seal of office to be made for the said department of such device as the President of the United States shall approve, and all copies of records and papers in the said office, authenticated under the said seal, shall be evidence equally as the original record or paper.

SEC. 6. And be it further enacted, That there shall be paid to the Secretary, for the use of the United States, the following fees of office, by the persons requiring the services to be performed, except when they are performed for any officer of the United States, in a matter relating to the duties of his office, to wit: For making out and authenticating copies of records, ten cents for each sheet, containing one hundred words; for authenticating a copy of a record or paper under the seal of office, twenty-five cents.

The Congress Commemorative Gold $5 Coin shows against a view of the Department of State building, circa 1831. 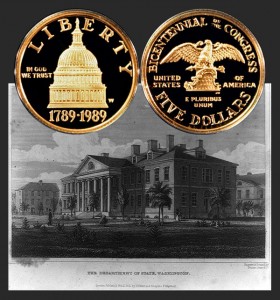