Today, the New York State Quarter Coin remembers the approval of the act for a new bridge across the Hudson or North River on July 11, 1890.

From the Statutes at Large of the United States, published in 1891:

CHAP. 669.—An act to incorporate the North River Bridge Company and to authorize the construction of a bridge and approaches at New York City across the Hudson River, to regulate commerce in and over such bridge between the states of New York and New Jersey, and to establish such bridge a military and post road.  Approved: July 11, 1890.

From the New York Sun newspaper of July 1, 1890, a description of the proposed bridge efforts:

The Senate on Saturday concurred with the House in passing the bill to incorporate the North River Bridge Company, with authority to build a bridge from the city of New York to the New Jersey shore and to maintain it as a military and post road.

A single voice in opposition would have delayed this bill, and might have defeated it for the present session; but it received unanimous consent, and this circumstance, and the hearty support given to it also in the House, are encouraging.

The bill authorizes Jordan L. Mott, Charles J. Canda, and their associates to build across the Hudson e bridge having but one span between the established pier lines of New York and New Jersey, and at a height which is to exceed in the clear that of the Brooklyn Bridge.

It is the business enterprise of a private company, but it is of vast importance not only to the people of the two States most concerned, but to the commerce of the whole country.

In recommending the passage of the bill, the House committee reported that the bridge ought to be “a national work, built under national authority, and operated under the supervision of the national Government, instead of under the patchwork legislation of two States.”

Three reasons were given for this view, namely, that the traffic, being wholly inter-State, should be subject to the Inter-State Commerce law; that there should be no risk of abuses of administration and conflicts of authority under the incongruous laws of two States; and that the raising of money could be accomplished best under a single, national charter.

In return for this recognition by the Government, the plans of the bridge and the methods of its construction must be approved by the Secretary of War. There are provisions also for securing the rights of the public and of the railroads to its use under fair and proper conditions; for one of the marked distinctions between this great structure and the bridge that spans the East River is that the former will carry from six to ten tracks connected with the great railroads which go north, west, and south from the New Jersey shore.

The dimensions proposed for this bridge, in the plans of Mr. Gustav Lindenthal, its designer, show the magnitude of the undertaking.

The great span will be not less than 2,860 feet long, measured between the centers of the shore towers, or 1,265 feet longer than that of the Brooklyn Bridge.

The two end spans will add about 1,500 feet each, and the total length, including the two approaches, would apparently be about 6,500 feet.

The towers will be double on each side, and 509 feet high, of wrought iron and steel, containing sixteen columns each, and resting on enormous masonry piers about twenty-five feet above high water.

In place of the single cables of the Brooklyn Bridge there will be double cables, one below the other, about fifty feet apart, and braced.

The Brooklyn Bridge cables are fifteen inches in diameter, but the prodigious cables of the North River Bridge will be four feet in diameter.

This stupendous bridge is to be erected, not only with no permanent obstructions to the navigation of the river, but even without temporary obstruction.

The false works or supports in the stream, which are usually employed in such cases to facilitate the construction, are prohibited by the terms of this bill, and that disposes of any opposition to the scheme which the towboat interests might have. The project of bridging the Hudson opposite the city of New York has been discussed for twenty years, but usually on a plan involving one or more piers in the river, and sometimes drawbridges besides.

Congress would never have consented to such a project, and the tug companies and river transportation interests in general would have fought it as injurious.

The cross currents in the North River cause even a tow of moderate length to swerve far out of a direct line; and with all the care taken by the tug, its flotilla of barges, lighters, or canal boats might be dashed by the current against a bridge pier.

But the present scheme removes such objections, although in doing so the cost is vastly increased.

The North River Bridge was not authorized by Congress until its plans had received the careful study, revision, and final approval of a Board of Engineers, of which Gen. Casey was President.

This Board first held sessions in New York, then in Washington, and made an elaborate report.

Of the great value of the connection of New York by rail with the Now Jersey shore there can be no question.

The New York State Quarter Coin shows with an image of the city from the river, circa 1899. 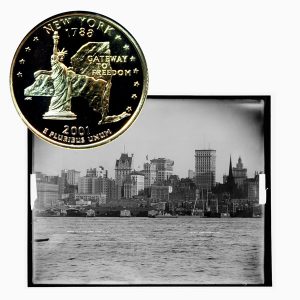