Today, the Washington D. C. Quarter Coin remembers when the three commissioners of the area sent a letter dated September 9, 1791, to L’Enfant advising him the area would be called the “City of Washington.”

In 1816 a visitor described Washington as “the city of magnificent distances,” referring to the great spaces between the scattered houses.

It was a facetious remark, and, while spoken in jest, it has proved to be far more prophetic than even the ambitious plans of General Washington for the creation and development of the infant city.

Today Washington is in fact “the city of magnificent distances.”

The vistas to the north, south, east, and west are unsurpassed in natural and architectural beauty.

“The public buildings in size, form, and elegance” as envisioned by the Father of our Country in 1792 are now realities that far exceed the magnitude of his own expression.

When this Nation emerged victorious from its struggle for liberty, it had no site for its Federal Government.

On April 30, 1783, six years before the Constitution was ratified, the first action was begun to find a permanent seat of government .

Various sites were offered, and many plans were discussed, until, in view of the intense rivalry existing between the North and South, it was suggested there be two capital cities. However, legislative action in 1784 forbade such a course of action.

During these years, as the exigencies of the war, personal convenience, or necessity directed, the Continental Congress (referred to by some as the Congress of the Confederation) met in eight different cities.

Meeting places of the Continental Congress

Meeting places of Congress after adoption of the Constitution

On July 16, 1790, after Maryland and Virginia donated generous portions of land along the Potomac River, Congress by law established the Federal District, now known as the District of Columbia, as the permanent seat of our Government.

It is said that George Washington, as a youthful surveyor who encamped with Braddock’s forces on the hill now occupied by the Naval Observatory — long known as Camp Hill — appreciated the advantages which this place presented for a city.

His youthful judgment was sustained by the subsequent establishment of two towns, Hamburgh and Carrollsville, as indicated by the first maps of the city.

The first public communication on record concerning arrangements for laying out the new capital city was penned by General Washington himself on March 11, 1791.

In a subsequent letter of April 30, 1791, he referred to it as the Federal City.

The name Washington was adopted about four months later, probably without the General’s knowledge.

The new District encompassed an area of 10 miles square.

Its first cornerstone was placed at Jones’ Point near Alexandria, Virginia, on April 15, 1791, by Commissioners Carroll and Stuart.

Major Pierre Charles L’Enfant was selected by President Washington to prepare plans for the city.

Dated September 9, 1791, at Georgetown, a letter to Major Pierre Charles L’Enfant from the first Commissioners Messrs. Johnson, Stuart, and Carroll — informed the famed French architect that the new Federal District was to be called “The Territory of Columbia,” and the Federal City was to be called “The City of Washington,” and Major L’Enfant was to title his maps accordingly.

His design, at once publicly acclaimed unique and artistic, called for broad avenues, ample parks, with circles and squares reserved for monuments to those national heroes who were yet to play their part in this young Nation’s history.

The Executive Mansion and the Capitol were the first two sites chosen by L’Enfant, the latter atop Jenkins Hill one mile southeast of the former.

These two points were to serve as hubs of giant wheels, from which avenues would emanate like huge spokes.

In Jenkins’ Hill, the young Frenchman saw a “pedestal waiting for a monument.”

No one can deny that it has more than adequately served that purpose, for the Capitol of the United States, majestic as it is atop this hill, is a fitting monument to the oldest Republic in the world today.

Viewed either under the blue skies by day or brilliantly illuminated against the dark of night, the great dome of this building, topped by the Statue of Freedom with the United States flag unfurled before it, is an impressive spectacle for a free people.

Of the many plans submitted for the Capitol, that of Dr. William Thornton, an amateur architect, drew the highest praise from President Washington and Secretary of State Jefferson. He was awarded a $500 prize.

Construction began early in 1793, and on September 18 of that year President Washington laid the cornerstone.

As a part of the program, the Commissioners delivered to the President, and he deposited on the stone, a silver plate with the following inscription: This southeast cornerstone of the Capitol of the United States of America, in the city of Washington, was laid on the 18th day of September, 1793, in the thirteenth year of American Independence, in the first year of the second term of the Presidency of George Washington, whose virtues in the civil administration of his country have been so conspicuous and beneficial, as his military valor and prudence have been useful in establishing her liberties, and in the year of Masonry, 5793, by the President of the United States, in concert with the Grand Lodge of Maryland, several lodges under its jurisdiction, and Lodge Xo. 22 from Alexandria, Va.

The President wore a Masonic apron embroidered by the wife of General Lafayette, and upon completion of the ceremony the whole company celebrated the event with a festive barbecue.

The Washington D. C. Quarter Coin shows with a plan for the City of Washington, circa 1793. 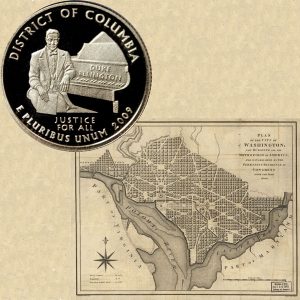