Today, the Half Cent Coin remembers when Harvard Professor John Farrar began observing the comet of 1811 on September 6th.

From the Memoirs of the American Academy of Arts and Sciences. Vol. III.—Part I., published in the early 1800s:

Observations of the Comet of 1811.

By John Farrar, Hollis Professor of Mathematics and Natural Philosophy in Harvard College.

The first time I saw this comet was on the 4th of September, but I was prevented by clouds from taking any observations, till the 6th, when I began to observe it.

I continued my observations, when the weather would permit, from this time to the 13th of January, when it became too faint to be distinctly seen.

This comet was visible in the early part of the year 1811, and was actually seen and recognized as a comet, not only by several observers in Europe, but as I have learnt since I completed my observations, by Mr. William Bond jun. an ingenious mechanic of Dorchester, Massachusetts, who has obligingly favored me with the following notices.

“I remarked,” says he, “on the 21st of April a faint whitish light near the constellation Canis Major, projecting a tail of about one degree in length, and set down its place as follows. Right ascension 106°, declination 9°S. April 24th 9 o’clock P. M. right ascension 108°, declination 7° or 8°S. Its motion and the situation of the tail convinced me, that it was a comet. I noticed it several times in May, and supposed that its motion was toward the western part of the constellation Leo.”

The tail of the comet was separated into two branches by a dark indefinite line along the middle, the lower branch being somewhat the longest.

Its apparent length varied from two to fourteen degrees. It appeared longest about the middle of October, and very much resembled the light of an aurora borealis.

The nucleus was apparently round but ill defined. It had very much the color and nearly the apparent magnitude of Saturn.

The diameter of the head, including the coma, was found by a micrometer Nov. 6, to be nearly three minutes.

Around the head for the space of four or five times its diameter there was a kind of dark ground, and then a luminous appearance, somewhat resembling a halo, and very apparent through an achromatic telescope, and even distinguishable by the naked eye.

This partial ring of light appeared to be of a parabolic form, and after describing a curve of nearly 180°, the two parts diverged, and passed on in nearly a rectilineal course, making the two branches of the tail.

In figure it very much resembled a current of water, flowing round a stick, or other obstacle placed in it. See Plate II. Fig. 4.

The apparent motion at first was about one degree per day; its velocity increased, till it amounted to a little more than 13° per day, and then began to decrease till it disappeared; when its daily motion, as referred to the earth, was only about 20′.

It came within the circle of perpetual apparition, about the 20th of Sept. and continued within it about 20 days.

When it was first seen, 6th of Sept. its longitude was about 18° less than that of the Sun. After continuing for some time at about the same distance it gained upon the sun, and on the 11th of Sept. came up with it, and passing it arrived at its greatest elongation 53° about the 10th of November.

From this time it began to fall back with respect to the sun, and continued to approach it with an accelerated motion, till it was at length lost in the twilight.

I began my observations, by taking the distances of the comet from Arcturus and Lyra, or Vega, and continued to make use of these stars, till Arcturus got so near the horizon, as to be subject to a very great refraction.

I then employed the Pole Star instead of it, and afterwards Atair, the motion of the comet being directed nearly toward this star.

I took the distances also of several other stars, as a check, some of which I have here given.

There is some uncertainty in the first observations, on account of the irregularity of the refraction, the comet being very near the horizon, as also with regard to the last on account of its faintness.

The following distances are the means of from four to ten observations. They were taken with a good sextant, divided to half minutes, the times being carefully noted by means of a watch provided with a second hand.

The watch was compared before and after the observations of each evening with a well regulated clock, and seldom found to vary more than 1″ or 2″ during the interval employed in observing.

The Half Cent Coin shows with Professor Farrar’s descriptive image of the 1811 comet. 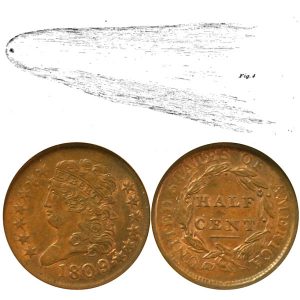