So, what are those plants on the reverse of the 2009 Sacagawea Dollar and why?

Born in England in 1604, John Eliot came to the New World in 1631 to live in Roxbury, Massachusetts.

As a chaplain and church elder, Eliot worked with the local Indians. He learned their language and translated the Bible using their words. The English colonists printed several of these Bibles for the Indians.

In the dictionary, beans can be found in a number of places. One elaborates:

Corn has different names, too, but they stem from this word:

Their word for squash, askútasquash, equates to “their vine apple, which the English from them call squashes, about the bigness of apples of several colors.”

Simply, those are the three sisters.

Indians learned that by planting climbing beans with corn as their trellis and squash as a living mulch for both, the three crops produced more vegetables to feed their tribes.

Of course, the three planted together do not work in large production fields plowed, planted and harvested by machine, but for the smaller gardens worked manually, the increased yield is significant at 30% more. 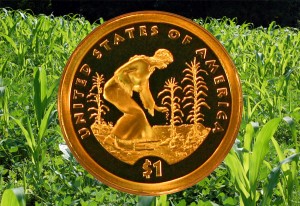