Today, the Illinois Centennial Silver Commemorative Half Dollar Coin tells the story of the early days of its territorial capital.

On February 3, 1809, Kaskaskia, Illinois became the capital of the Illinois Territory, and in 1818, when Illinois became a state, the town served for a short time as the new state’s capital.

Being on the early throughway from the east to the west, Kaskaskia had over 7000 inhabitants at its peak.

John Reynolds, the oldest of six children, remembered the trip with his family to the frontier town.

In February 1800, the Reynolds family began their journey from Tennessee with the objective of settling in New Spain just west of Kaskaskia.

In his book, Reynolds’ History of Illinois, he described their arrival:

When we approached the high bluffs east of Kaskaskia we halted our travelling caravan, and surveyed with wonder and delight the prospect before us. It was in the spring, and the scenery was beautiful.

The eye ranged up and down the American Bottom for many miles, and the whole landscape lay, as it were, at our feet. The river bluffs rose two hundred feet or more above the bottom, and the prairie lay extended before our view, covered with cattle and horses grazing on it. The Mississippi itself could be seen in places through the forest of cotton-wood trees skirting its shores, and the ancient village of Kaskaskia presented its singular form and antique construction to our sight. The ancient Cathedral stood a venerable edifice in the heart of the village, with its lofty steeple, and large bell — the first church bell I ever saw. Around the village were numerous camps and lodges of the Kaskaskia Indians, still retaining much of their original savage independence.

This was our first sight of a kind of quasi-civilization we saw in Illinois, and it was so strange and uncouth to us, that if we had been landed on another planet we would not have been more surprised.

The Kaskaskia Indians were numerous, and had still retained some of their savage customs. Many of the young warriors decorated themselves in their gaudy and fantastic attire with paints. Feathers of birds were tied in their hair; and sometimes the horns of animals were also attached to their heads. They galloped in this fantastic dress around our encampment. This was a kind of salutation more to demonstrate their per sons and their exploits than anything else.

After recruiting a short time, and obtaining some provisions for ourselves and food for our horses, from the grist-mill of General Edgar, which was “hard by,” my father had his humble caravan prepared to cross the Mississippi and ” all aboard,” when some gentlemen from Kaskaskia came to our encampment and held a conversation with my father. These gentle men were Messrs. Robert Morrison, John Rice Jones, Pierre Menard, and John Edgar, who debated the subject with my father, whether it was not better for him to remain at Kaskaskia sometime, and look around for a permanent residence. The argument of these gentlemen prevailed, and my parents agreed to take a house in Kaskaskia, and examine the country “around about.”

After taking sometime in the exploration of the eastern side of the Mississippi, my father reaffirmed his decision to make the Spanish country his residence, and went to Ste. Genevieve to obtain a permit of the Spanish Commandant to settle on the west side of the river.

In the permit to settle in the Domains of Spain, it was required that my father should raise his children in the Roman Catholic Church. This pledge was a requisition of the Government in all cases, and my father refused to agree to it. My whole family were Protestants, and would not consent to educate their children in a faith they did not approve. This was the main reason that decided our destiny to settle and reside in Illinois. The visit of the Kaskaskia citizens had no doubt some effect with my father; but the requisition of the Spanish Government was the governing principle with my Protestant ancestors.

It is surprising to witness, through the progress of human events, the small circumstances that frequently occur without much notice, and often without reflection, which often govern the fate and destiny of a person or nation forever. The persecution of the Puritans in old England caused the settlements of New England, and out of it mighty results flowed. The small circumstance of my father disliking the Spanish requisition decided the fate of himself and family as to residence.

We remained in Kaskaskia for some months, and planted corn in the French common field; but at last located in the small settlement a few miles east of Kaskaskia. Our residence was within about two and a half miles of Kaskaskia, and we made mathematically the seventh family in the colony. We made our habitation east of Kaskaskia River in the forest amongst the high grass, and the wolves and wild animals were howling and prowling about us every night. We enjoyed not the least semblance of a school, or a house of worship, or scarcely any other blessing arising out of a civilized community. In this state of the country, it required great moral courage to remain in it. My father conquered all difficulties and remained here during his life.

The wise Creator formed the human family to become familiar and reconciled to the surrounding circumstances. In a few years, we all were pleased and happy in our present wilderness location; but at first, it was extremely painful and disagreeable. Although a great amount of destitution stared us in the face, yet in a few years, we forgot our artificial wants, and were happy among the Indians and wolves.

Shortly after Illinois became a state, the capital moved from Kaskaskia to Vandalia then later to Springfield.

In 1881, the mighty Mississippi changed its course and all but wiped out Kaskaskia.

Today, only a small community remains.

The Illinois Centennial Silver Commemorative Half Dollar Coin shows against a view of the Kaskaskia state house just months before the river finished its destruction. 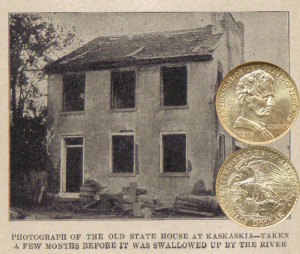