From The James Sprunt Historical Publications published under the direction of the North Carolina Historical Society, 1916:

Teach was composed of the stuff necessary to make a successful pirate. He was a large, dark man physically; his will was as strong as his physique. He was passionate to the extreme; he caroused and ate and drank as hard and as heartily as the famous robber barons of mediaeval Europe. He was fond of luxuries, and despite his fierce mien, due to a superabundance-of long black whiskers, from which he derived his nickname, Black Beard, he was amiable to women generally.

In keeping with his nature, he had some eight or more wives, a state of matrimony only equaled in modern times by wealthy Mohammedans and by exceptional cases among the Mormons. Teach’s unlawful method of gaining a living was thus in perfect accord with his general temperament.

The depredations of the pirates of the Bahamas became such frequent and serious affairs that it was necessary for something to be done to suppress their general lawlessness. The commerce of the Bath, Albemarle, Archdale, and Clarendon counties with Virginia and with the New England colonies was a growing one.

The cargoes which these colonial merchantmen carried were often very valuable, and were consequently the coveted objects of many a piratical eye, since not only French and Spanish ships were molested, but also the merchantmen of the colonies or the mother country itself.

So troublesome had these pirates made themselves, and so risky had commerce become, that it became necessary for the King to issue a general pardon to all those who had been engaged in piratical depredations, and who would, within one year, surrender themselves and take an oath not to engage in this unlawful enterprise again.

Many of these pirates acceded to the terms of the pardon, gave up this illegal method of living, and became planters and good citizens in several of the colonies.

Teach also pretended to agree to the generous terms of the proclamation of Charles II, and he accordingly settled at Bath. His resolutions (if he ever made any) were soon broken; the thrilling sensations of a chase, a few broadsides, a hand-to-hand struggle,—and then the grim satisfaction of having his unfortunate enemies walk the plank proved too much for his wild and bloody nature.

In November of the same year he set sail from Bath and began all his freebooting anew. He sailed the seas, armed both ship and crew, and his name became a terror to every mariner.

His ship was of the kind which had clean heels, and he could chase, strike, plunder, and sink or burn a ship and slip away again before he could be taken.

The commerce of the Carolina colonies almost ceased to exist, and Charles, in desperation, sent some of the most skillful English officers to put an end to a part of the buccaneering of the Bermuda outlaws.

These loyal seamen of Charles II succeeded in capturing some of the robbers, but not Teach nor Major Bonnett, who had become Black Beard’s running mate, since these two bold buccaneers were off on a cruise at the time their headquarters were taken.

Exulting in his having escaped, and conscious of his own strength and the fleetness of his ships, Teach, together with Bonnett, sailed the seas, becoming more of a terror than ever.

He established anew the old order of the buccaneers, and, because of his bravery and daring, he became their leader.

The commerce of our colony, though it was necessarily small, was paralyzed, and the trade of South Carolina with other colonies or with the mother country was also broken up.

The King sent Sir Woods Rogers to drive these pirates off the seas. He captured all of those he found at Providence with the exception of Vane, Bonnett, and Black Beard, who were away on a cruise, and thus escaped capture.

But luck was not always with Teach, for, upon repairing to the coast of North Carolina, two of his ships, his flagship and another sloop, were wrecked at Topsail Inlet in June, 1717.

As a result of this misfortune some of his crew deserted him, going to the middle colonies, settling, and becoming good citizens.

This gave Teach another opportunity to take advantage of a second pardon, which he was to have received from the King upon his surrendering at Bath. Teach, however, was only pretending to reform, for he again took to piracy after a short rest.

On his outward voyage he captured two French merchantmen loaded with the products of semi-tropical countries, part of which consisted of chocolate, sweetmeats, loaf sugar, and other commodities.

These ships he took, and on the night of the 13th or 14th of September he entered Ocracoke Inlet and proceeded to place his booty in as safe a place as possible, leaving a part of it at the plantation of Tobias Knight at Bath.

Whether these goods were known by Knight or Governor Eden to have been taken through piracy or not is not certain, though the people evidently suspected Teach.

He had robbed a perianger of William Bell, a merchant of Pasquotank, in the Pamlico River on the night of the 14th of September, and had taken over seventy-five pounds in money and goods.

It is the common people—the populace at large—who suffer most when any outrage is committed, and it is they who finally rise up in their might and either personally or through their agents make their own restitution.

The people sent a complaint to the Governor of Virginia, Spotswood, and a petition for aid sufficient to rid the colony of this pest of a pirate. Spotswood acted with great secrecy, and, securing two officers, Lieutenant Maynard and Captain Brand, from His Majesty’ s ships the “Lyme” and the “Pearl,” which were then lying in Chesapeake Bay, he gave them command over two well-armed and equipped sloops of war.

They sailed for Ocracoke on the 17th of November, coming into Ocracoke Inlet on the evening of the 21st. They found Black Beard on the inside of the bar, and, anchoring, they prepared to pass the night, having the treacherous Teach bottled up in Pamlico Sound.

The next morning found both Maynard and Teach ready for a deadly combat. The ships maneuvered, each trying to obtain the advantage of the other, and here it seems as if the pirates held the advantage, for they were familiar with the bars and shoals, whereas the attacking vessels had to feel their way, so to speak.

Soon one of Maynard’s ships grounded, and a broadside from Teach killed or wounded some twenty of his crew. But the brave lieutenant had come there either to take Teach or to be killed in the attempt; he did the former.

After a series of maneuvers, and a hand-to-hand struggle, the pirates were taken, only after Black Beard had fallen, faint and mortally wounded.

There is one story that says Teach’s head was cut off and was affixed to the bowsprit of Maynard’s ship as she sailed into Bath Creek.

Certain it is, however, that the pirates were taken; that their plunder was carried to Virginia and sold at auction by the government upon the recommendation and testimony of Captain Brand, the confiscated goods bringing the large sum of 2,238 pounds; and that the commerce of the colonies again began to flow along at its normal pulse.

In the narrative of the story of the capture of Teach, Maynard is probably due most of the credit. His vessel remained clear, unlike that of Brand, which grounded. It is well to note that Maynard was responsible to Captain Brand, who was commander in-chief of the two sloops. It is also to be noted that Major Steed Bonnett was not at hand when Teach was taken, but that he continued his life of a sea-marauder until he was finally captured and hanged in Charleston by Colonel William Rhett.

Thus passed two pirates whose daring and bloodiness and whose intimate knowledge of and interest in our county form remarkable contrasts to our knowledge of present-day life on and around Pamlico and Albemarle sounds.

The North Carolina State Quarter Coin shows with an artist’s image of Black Beard’s head hanging from the bowsprit of Maynard’s ship. 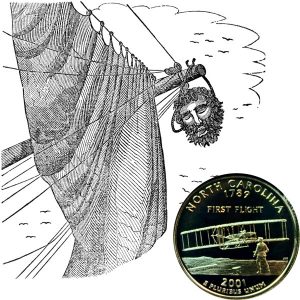