Today, the Capitol Commemorative Silver Dollar Coin remembers when Congress agreed to commission John Trumbull to paint four scenes from the Revolutionary War to hang in the rotunda on February 6, 1817.

The Pennsylvania Magazine of History and Biography, Volume XXXI, published in 1907, included an article by John H. Hazelton titled The Historical Value of Trumbull’s “Declaration of Independence.”

This article also discussed Trumbull’s commission for the historical paintings to be placed in the capitol.

By a joint resolution of February 6, 1817, Congress authorized the President, James Madison, “to employ John Trumbull, of Connecticut, to compose and execute four paintings commemorative of the most important events of the American Revolution, to be placed, when finished, in the capitol of the United States.”

Trumbull had written to Jefferson from New York under date of December 26, 1816:

Twenty-eight years have elapsed since, under the kind protection of your hospitable roof at Chaillot, I painted your portrait in my picture of the Declaration of Independence, the composition of which had been planned two years before in your library: the long succeeding period of War & Tumult palsied & suspended my work, and threw me, as you know into other pursuits . . .

The Government of the U.S. are restoring to more than their original Splendor the Buildings, devoted to National purposes, at Washington, which were barbarously sacrificed to the Rage of War [by the British, in 1814].—& I have thought this a proper opportunity to make my first application for public patronage & to request to be employed in decorating the Walls of those Buildings with the paintings which have employed so many years of my Life.

The Declaration of Independence is finished—Trenton Princeton & York Town which were long since finished & engraved—I shall take them all with me to the Seat of Government, in a few days that I may not merely talk of what I will do, but show what I have done: and I hope it will be thought that the declaration of Independence with portraits of those eminent Patriots & Statesmen who then laid the foundation of our Nation; and the military pictures with portraits of those Heroes who either cemented that foundation with their Blood, or lived to aid the Superstructure, will be appropriate Ornaments for the Halls of the Senate & the House of Representatives.

I enclose you a letter to Col. Monroe, who without it would do everything he could for you, and with it not the less, his warm heart infuses zeal into all his good offices.—I give it to him the rather also because he will be in place when you will need them.

Mr. Madison will be away and it would be useless to add to the labors of his letter-reading and I know moreover his opinions and dispositions towards you to be as favorable as can be wished. I rejoice that the works you have so long contemplated are likely to come to light, if the legislature, to the re-edification of the public buildings will take up with spirit their decoration also, yours must be the first objects of their attentions.

I hope they will do it, and honor themselves, their country, and yourself by preserving these monuments of our revolutionary achievements.

In the debate on the third reading of the resolution in the House of Representatives, it was, among other things in support of the resolution, argued “that the time now was, which once passed away could never be regained, when a living artist of great ability, and a compatriot of the Revolutionary sages and heroes, could transmit accurate likenesses of them to posterity, &c.”

All of the four paintings finally decided upon, “Declaration of Independence”, “Surrender of General Burgoyne”, “Surrender of Lord Cornwallis” and “General Washing ton resigning his Commission”, the last of which “was scarcely finished in April, 1824,” now hang in the rotunda of the Capitol, rather than in “the Halls of the Senate & House”.

The Capitol Commemorative Silver Dollar Coin shows with images of the four Trumbull paintings commissioned by Congress to hang in the refurbished building. 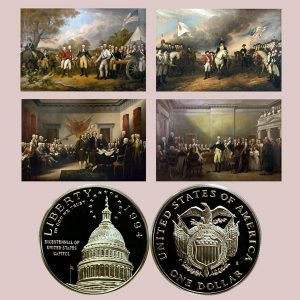