Today, the New York State Quarter Coin remembers the opening of the tunnel under the East River connecting the Battery to Brooklyn on January 9, 1908.

An excerpt from an article in the Electrical Review periodical of April 11, 1908 titled The East River Tubes Connecting New York and Brooklyn:

The most recent addition to the rapid-transit facilities of the boroughs of Manhattan and Brooklyn, New York city, was put into operation on January 9, when the Interborough Rapid Transit Company sent its first train-load of officials and invited guests through the system of tubes which had been constructed from Bowling Green, Manhattan, to Borough Hall, in the borough of Brooklyn.

Formal exercises commemorating the opening of these tubes were held at Borough Hall, in Brooklyn, the leading officials and prominent citizens taking part in the exercises on that day.

The history of these tubes dates from 1900. In February of that year the Board of Rapid Transit Railroad Commissioners, having completed the Manhattan subway contract for the city, directed its chief engineer to investigate and report as to the practicability and cost of extending the system to Brooklyn by means of a tunnel from South Ferry.

Special legislation had to be undertaken, because, under the Rapid Transit Act of 1894, the jurisdiction of the board did not extend to the borough of Brooklyn.

A bill was introduced and passed in the legislature, thus extending the jurisdiction of the board. This bill became a law in April, 1900, upon its acceptance by the city and its approval by the governor.

At the public hearings prior to the enactment of the bill, which were largely attended by representatives of various civic bodies, arguments were advanced principally in favor of two different routes, one via Joralemon street and Flatbush avenue to Atlantic avenue, in Brooklyn, and the other via Hamilton avenue to Bay Ridge.

At the hearings it proved that the former route, which was the one adopted later on, had the support of the largest and most representative of these organizations.

One of the most important of the incidents characterizing the debate upon the preferential route was the offer by the Rapid Transit Subway Construction Company, the general contractor for the Manhattan subway, to bid for their construction and operation in the event of the tunnels being built along the Joralemon street route.

Finally, on January 24, 1901, the Board of Rapid Transit Rail road Commissioners passed a resolution adopting the Joralemon street route, and authorized an application for the approval of the municipal authorities.

There was further opposition, however, and it was not until June 1, 1901, that the necessary approval of the municipal assembly and the mayor was secured.

Further than this, consents could not be secured from the owners of one-half in value of the property along the streets of the proposed route, and the matter had to be taken to the Supreme Court of the state of New York.

After several hearings the commissions which were appointed by the Appellate Division to take testimony reported favorably to the court, which confirmed their findings in January, 1902.

Consent had in the meantime been granted by the Secretary of War for the construction of the under river portion of the route. The consents of the city departments of parks and docks had also been obtained.

Plans and estimates had been prepared by the engineering department of the Rapid Transit Railroad Commission, and the first studies for the river portion were made with a view to building the tunnels in sections, sinking them into place and joining them together. This plan was found impracticable and was given up.

On June 12, 1902, the board adopted certain plans and forms of contract which had been prepared, and authorized advertising for bids. The contract was awarded to the Rapid Transit Subway Construction Company on the basis of the lowest bid, and this was executed as contract No. 2 on September 11, 1902.

The contract price was $2,000,000, and was estimated to be one-fifth of the actual cost of construction. The work was sublet for construction in four sections by the general contractor. The river tunnel section was let to the New York Tunnel Company about the end of 1902.

The route of the river tunnel section, as contracted for, begins at a point at the east side of Battery Park, opposite Pearl street, in the Borough of Manhattan, curving to the south and east through Battery Park, passing the bulkhead line on the river tangent at the foot of White hall street, continuing under the East River to the Brooklyn side, and ending at Clinton street.

After construction began a deviation in the line of four degrees to the south was made near the Manhattan side, to allow for passing under the Brooklyn slip instead of under Pier 17 to the north, as originally planned.

The grade is 3.1 percent downward on each side of the river, except for a short distance near the middle, where a 0.5 per cent grade upward toward Brooklyn was later introduced. This portion is joined to the steeper grades on each side by vertical curves of 10,000 feet radius.

The tunnel is everywhere below the water level, except for about 700 feet at the east or Brooklyn end. The lowest point reached by the tunnel is ninety-four feet below mean high water.

The tunnel consists of two circular single-track tubes of the usual cast-iron ring construction. These are fifteen feet six inches in internal diameter, and run side by side twenty-eight feet apart on centers, except under Joralemon street, Brooklyn, where this space is decreased to twenty-six feet.

The accompanying illustration showing the profile of the tubes is interesting.

For a distance of about 2,700 feet the material on the Manhattan side from the shaft east to the lowest point in the tunnel consists almost entirely of rock.

About half-way from the low point to the Brooklyn side another stretch of rock about 400 feet in length is passed through.

The rock is generally found to be a good character of mica schist and gneiss. For the remaining distance the material consists generally of sand of varying degrees of fineness.

Under Joralemon street, and part way out in the slip between Piers 17 and 18, the sand is of ordinary coarseness and contains considerable gravel, cobbles and boulders of all sizes.

Between the two rock formations, and east of the Brooklyn reef, the sand is extremely fine and contains a certain admixture of clay. This material is of the same nature as the quicksand encountered in foundations in the lower part of Manhattan Island, and shows the same tendency to run when disturbed.

The Manhattan shaft was located in the Battery Park enclosure, opposite South Ferry, and excavation began on March 4, 1903. This shaft measured fourteen feet by fifty-two in plan, taking in the headings for both tubes, and extended to the tunnel subgrade about forty-five feet below the surface. The shaft was sheeted on all sides with five-inch tongued-and grooved sheeting, driven to the rock line, which was reached approximately half way down.

The headings for the north and south tubes were started east from the Manhattan shaft on April 9 and April 16, respectively.

By the end of May, 1906, the headings reached a point near the end of the rock formation, where further progress was stopped temporarily to install shields.

The first of the Brooklyn shafts—one for each tube—were located in Joralemon street, about 1,300 feet inland from the river, just west of Henry street, and about 700 feet from the end of the tunnel section.

Excavation began on April 16, 1903. Each of these shafts was twenty feet by twenty-four feet in plan, sheeted with four-inch tongued and-grooved sheeting, and extended sixty five feet below the surface to the bottom of the tunnel.

The first portion of the tunnel to be built in Brooklyn was a length of about 700 feet in each tube east from the shafts to the end of the section.

The shields for the west headings were being equipped while the first pair progressed east. The south shield began to advance west from the shaft November 12, 1903, and the north shield February 2, 1904.

After the bulkhead line was passed, caissons were sunk for new shafts, and these were put into use April, 1905, after which the original shafts were filled up.

The new shields each measured nine by thirteen feet in plan, and were sunk thirty feet below the surface to the top of the tubes, to which they were then connected.

They were then dismantled, leaving the outer shells in place, after which the cast-iron lining was completed.

All tunneling operations were carried on in compressed air, except in the Brooklyn headings, where the tubes are above water level, and inside the bulkhead line at South Ferry, where leakage could be easily controlled by pumping.

The working pressure varied from a few pounds to a maximum of forty-two pounds to the square inch above atmospheric pressure at the deepest section under the middle of the river.

The tubes were divided into working chambers by brick or concrete bulkheads at intervals, into each of which were built two locks for passage of work men and materials.

The tunnel shell is built up of flanged cast-iron plates bolted together by their flanges to form rings, each composed of eight segments and a key.

The rings are fifteen feet six inches in internal diameter, twenty-two inches in length, one and one eighth inches minimum thickness of metal, and seven inches to seven and one half inches depth over flanges.

The lining is grouted externally with equal parts of crushed dust and cement, and is made water-tight by caulking with metallic lead in the recesses at the inner edges of the joints.

The bolts and nuts are grommetted with a ring of hemp and red lead under plate washers.

During the construction of the tube many sensational reports found their way into the daily press, reflecting upon the work of the engineers and constructors.

The New York State Quarter Coin shows with an engineering diagram of the tubes under the East River in 1908. 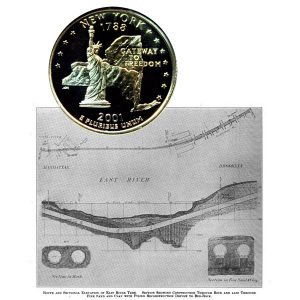