Today, the New York State Quarter Coin remembers when the last plank was laid for the suspension bridge over the Niagara river and the architect drove horses and carriages over the bridge on July 29, 1848.

From The Mechanics’ Magazine, Museum, Register, Journal and Gazette, of September 20, 1848 edited by J. C. Robertson:

The Suspension Bridge at the Falls of Niagara.

The best view of the Falls, and one which cannot fail to impress their grandeur upon the mind, is from the deck of the Maid of the Mist, a small steamer, which makes several trips daily from the landing near the Suspension Bridge, about two and a half miles below the Falls.

You pass in front of all the Falls, English and American, having a perfect view of all from as near a point as safety will permit.

The suspension-bridge just erected over the Niagara river, is in full view of the Falls, and about two and a half miles below.

The chasm over which the bridge passes is 800 feet wide, consequently the bridge has a span that length.

The stream, about 400 feet wide, rushes through 230 feet below the top of the banks, with a velocity of 23 or 24 miles an hour, swifter than the fastest steam-boat speed.

No boat can cross it there, and the most powerful steamer, headed up stream, would lose ground.

Nothing is now complete but the foot bridge, which starting from the level of either bank , rises with a gentle angle to the centre.

The track is 7 feet 6 inches wide, laid with a durable floor of pine boards upon sleepers, 3 by 6 inches scantling, 4.5 feet apart.

These scantlings are supported at each end by suspenders from the cables. Each suspender is composed of four strands of No. 10 wire, passing around the scantling, and fastened to the cables above, thus forming a double wire rope about the size of a man’s finger, and an ample size for security.

The bridge is supported by eight wire cables, each composed of 72 strands of No. 10 wire, bound together by smaller wire, forming a rope about an inch and a half thick.

These cables are 1160 feet long, nearly a quarter of a mile. They are secured at each end by being firmly anchored in the solid rock 200 feet from the brow of the bank.

The towers over which these cables pass stand near the brow of the bank, and are of wood, and 57 feet high.

The whole structure, when compared with the immense chasm over which it extends, seems like a gossamer fabric, or spider’s web, yet when we consider the strength of the materials of which it is constructed, and the manner in which they are secured, the most timid must feel assured of its strength and durability.

It is calculated that it will sustain many times the weight that will ever be placed upon it.

The last plank in the floor was laid on the 29th of July, and although the railing is completed only about one third of the way, Mr. Ellett (Elliott?), the architect, drove a high-spirited horse over and back, riding himself in the buggy.

He then, with equal safety, drove over and returned with a span of horses and carriage, weighing about 3000 lbs.

Thus had I the unexpected pleasure of seeing what no man will ever witness again, the first horse and buggy and the first span of horses and carriage that were ever, from creation down to the present time, driven on a bridge over the Niagara.

The bridge, from its immense span and the manner in which it is sustained, waves like thin ice beneath the carriage or the step of the passenger.

It is not intended for carriages, but after this trial of its strength none can pronounce it unsafe for pedestrians, and few who visit the place will hesitate from its broad circle to view the Falls above and the mad rush of waters so far beneath his feet.

We traversed it with a feeling of perfect security, and on trying the experiment several times found it took four seconds for a stone dropped from the bridge to strike the water.

The bridge is a beautiful structure. The cost, up to the present time, is about 24,000 dollars. The first cord was carried across by a kite, from the American side, during the prevalence of an east wind, then large ropes, then the cables, then temporary structures, on which the workmen stood to build the bridge.

So far no accident attended with loss of life has occurred daring its construction.

The upsetting of the bridge, which was reported a few weeks since, and by which the lives of some of the workmen were endangered, was of these temporary structures, and not the bridge itself.

It is now so braced and supported that it would seem to bid defiance to storm and whirlwind.— Cleveland (U. S.) Herald.

The New York State Quarter Coin shows with an image of the suspension bridge over the Niagara river, circa 1849. 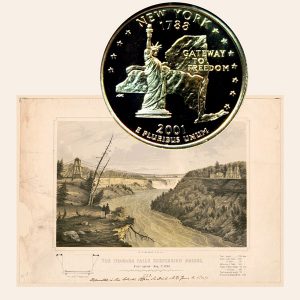