Today, the Hawaii State Quarter Coin remembers the events of December 7, 1941 that damaged both military and civilian targets.

On the following day, the Wilmington [NC] Morning Star printed the first news of the attacks:

Two Nippon Planes Shot Down As U. S. Forces Go Into Action

NEW YORK, Dec. 7.—(AP) —Japanese warplanes killed 350 men at Hickam field and set fire to the U. S. Battleship Oklahoma today in a sudden raid on Pearl Harbor and Honolulu, an NBC observer radioed direct from the scene today.

Two other ships in the harbor also were attacked, he reported.

This was when a private plane owner reported he was given a salute of machine gun bullets by the Japanese planes. His craft was damaged but he managed to land.

The private flier was Ray Buduick, an attorney, the announcer said.

The attacking planes seemed to come from the south, the observer said.

He reported that two radio stations announced the attack but that residents still were skeptical until bombs began falling in various parts of Honolulu and at Air Force and Naval bases.

The first Japanese planes, he said, attacked Ford Island at Pearl Harbor, the U. S. Navy’s mighty fortress of the Pacific.

Several squadrons swept in from the south over famous Diamond Head and dropped explosives and incendiary bombs in the city.

One man was killed by a bomb which fell in front of the governor’s mansion in Washington Place, the observer continued, and another dropped near the Advertiser building.

There was heavy bombing of Pacific heights and other residential districts, he said. One woman was killed.

The governor proclaimed a state of emergency and traffic came to a standstill in parts of Honolulu.

However, he added, traffic to and from Waikiki seemed to be still normal.

The hit on Hickman field was on a barracks or derricks (the word was not clearly heard in New York) the announcer said, and another field on the other side of the island also was heavily bombed.

Army officials announced that two Japanese planes had been shot down in the Honolulu area.

Several fires were started in the city area, but all were immediately controlled.

The M-Day proclamation establishes civilian-military control of traffic and roads, and permits the governor to issue food ration regulations.

First reports said 10 or more persons were injured when enemy planes sprayed bullets on the streets of Wahiawa, a town of around 3,000 population, about 20 miles northwest of Honolulu.

This report indicated the aerial attack was aimed at points on the island of Oahu other than Honolulu and the heavily fortified Pearl Harbor naval base.

The attack seemed to center against Hickam Field, huge Army airport, and Pearl Harbor, where the islands’ heaviest naval fortifications are located.

Wave after wave of bombers streamed through the cloudy sky from the southwest, shattering the morning calm.

Perhaps the first to die was Bob Tyce, owner of a civilian airport, near Honolulu, who had started to spin the propeller of a plane when the enemy came over one plane swooped down, machine guns blazing, and Tyce fell dead.

Roy J. Titousek, Honolulu attorney, was piloting his own plane in an early morning sky ride when the attackers came over. Several enemy craft chased him, but he got away safely.

Most of the attackers flew high, but a few came low. Five came down to under a hundred feet elevation to attack Pearl Harbor. An oil tank there was seen blazing and smoking. Others apparently headed directly for Hickam field to drop bombs.

There was no immediate statement by military officials as to whether any service men were killed or injured, or as to property damage at military and naval posts. Spectators said they saw the Japanese Rising Sun emblem on the low flying planes.

When told there were dead and wounded as the result of the attack, Kito still expressed doubt that they were caused by Japanese planes.

United States destroyers were seen steaming full speed from Pearl Harbor, and spectators’ reports of seeing shell splashes in the ocean indicated there had been an engagement between United States and Japanese ships.

One of the bombs that started Honolulu fires fell near Governor Poindexter’s residence, but he was not injured.

Fire Chief Wallace Blaisdell reported the fires were under control, because of a radio call that brought all firemen to duty. The fires, he said “were not as bad as I expected”.

Some streets were pocked with big holes, and several citizens were wounded by bomb fragments.

Farrington High school was converted into a hospital to care for the wounded and injured.

When the attack started, radio calls ordered all sailors, marines and soldiers to report instantly to their posts.

Soon, the sky was filled with puffs of smoke showing anti-aircraft batteries had gone into action. Their shells were stabbing for the high flying bombers.

United States planes took to the air, and spectators on hills back of the city could see dogfights over the area.

The Hawaii State Quarter Coin shows with an image of civilian damage in the early morning hours of December 7, 1941. 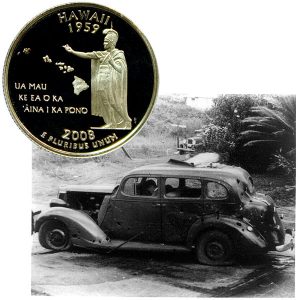