Today, the reverse of the Eisenhower Dollar coin celebrates Mr. Aldrin’s 85th birthday by remembering the Gemini 12 mission in which Buzz Aldrin set a record for EVA, extra-vehicular activity, a.k.a. spacewalks, a record he kept until the Apollo 14.

In the early days of the space program, the news presented a glimpse into the awe and excitement of the explorations.

On November 13,1966, the Ocala Star Banner provided a description of part of the Gemini 12 adventure:

Whipping 42,000 miles through the ocean of void, Aldrin poked head and shoulders out the roof of his spaceship Saturday for more than two hours as he and his companion spent an exotic day exploring heavenly secrets.

He was awed and chatty as he became a star-gazing shutter-bug smoothly sailing through the complex picture-taking session that proved to be a flawless prelude to Sunday’s long work session outside.

The sun, moon and stars, plus the world beneath them, held the astronauts’ interests after pesky problems with a target rocket linked to their nose seemed to have disappeared.

Aldrin and his champion flying partner, James A. Lovell Jr., skillfully chased the moon across the face of the sun, capitalizing on an opportunity to snap man’s first, perhaps most revealing, pictures of a rare solar eclipse from space.

“What did I tell you, Buzz?” Lovell asked his rookie pilot as Aldrin hung outside. “Four days vacation with pay and see the world.”

For about 2 hours and 20 minutes, Aldrin’s hatch stayed open, exposing both men to hostilities of space. With Lovell guiding the ship, Aldrin spent the time snapping scientific picture of selected star fields like the Milky Way.

Their biggest thrill, though, came as they sped over the United States.

“Pretty clouds down there,” Aldrin told mission control as they flashed toward Texas. “How’s the weather in Houston?”

“It’s cloudy. We have a front laying just off the coast.”

“I think I can see it. Tell everybody to smile down there.”

When Aldrin first stood up, bundled snugly in a bulky spacesuit with oxygen hoses keeping him tied to the seat, he noted: “It looks like I have a small tendency to float out, but very little. I’m completely free. I push myself away and it feels better…”

Gazing into the boundless area of space, he spotted strips dangling from the rear of Gemini 12. They apparently had not been cut clean when the spacecraft separated from the booster rocket.

“We’ve got some of that primer cord hanging around the aft (rear),” he said. “Looks like I’ll have to pull some of that stuff away when I get back there.”

His spacewalk, designed to probe baffling questions by strollers before him, will take him to the rear where a “work bench” is designed with simple tasks for him. He might have to snip some of the cord to keep from getting tangled.

Aldrin used an ultraviolet camera mounted on the side of the spacecraft to take the pictures of star fields, mainly Cassiopeia and Sirius. Relative to the rest of the universe, these fields are believed to be young — about 10 million years old — and pictures from space might give hints to their origin.

Their main jobs completed, the astronauts turned to taking photos of each other.

“I need to smile?” Aldrin asked.

“You get the right setting?”

It was a tedious job clawing back inside the tiny cockpit, no larger than the front seat of a compact car.

“Okay,” Lovell said calmly. “You were on the switches for the fuel cells.”

Once back inside, the pilots settled down for an afternoon of other scientific experiments, then planned to get a good night’s sleep before the big day Sunday, third day of the four-day mission.

Aldrin, an Air Force major, plans to leave the spaceship while being fed oxygen through a 30-foot umbilical. First, he will ease over to the Agena and attach a 100-foot cord for a formation flight later in the day.

Gemini 12 chased the solar eclipse after suspected trouble in the Agena target rocket forced cautious mission officials to shuffle the flight plan. An attempt to crank the Agena to carry the astronauts to a high-flying 460-mile altitude was deleted and the solar photography inserted.

As the moon moved between earth and the sun, the astronauts shielded their eyes, placing a shade over one window and a filter over the other. They were warned not to look directly at the sun because of the heat danger to their eyes.

The eclipse was quick and dramatic. Using two 16mm movie cameras and one still, the pilots photographed the brief period the sun was completely blotted by the moon. However, they failed to spot the giant, 52-mile shadow cast across Peru, Bolivia, Brazil and Argentina.

“We hit the eclipse right on the money,” Lovell reported. “But we were unsuccessful in picking up the shadow.”

On earth, the total eclipse could be seen for about 3.5 hours, but in space, with Gemini 12 whizzing around the globe 17,500 miles an hour, the astronauts could see it only for about seven seconds. They also took a complete set of movies of the moon’s passage across the face of the fiery body.

As the orbiting astronomers skirted through space, scores of scientists chased the rare event across South America. Sounding rockets blasted skyward from Brazil and Argentina, along with balloons — all instrumented to glean scientific data.

An eclipse is a real treat for scientists since this was the first one in 18months and only the 39th of this century. Of primary interest is investigation of the sun’s corona — the gray halo of gases extending millions of miles outward.

Lovell, a Navy captain, and Aldrin originally had intended to take ultraviolet pictures of the eclipse by having Aldrin stand in his seat, as he did later.

Of course a few years later, Buzz Aldrin became the second man to walk on the moon during the Apollo 11 mission.

The reverse of the Eisenhower dollar coin with its design based on the Apollo 11 mission patch shows against a view of Aldrin during the November 12, 1966 spacewalk from Gemini 12. 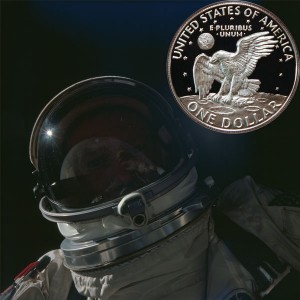