Today, the Army Commemorative Silver Dollar Coin remembers when they first tested smokeless powder in their big guns on July 25, 1891.

From the New York Tribune newspaper of the following day:

Its First Trial in this Country—Surprising Results with an Eight-Inch Rifled Gun—Good Work with the First Twelve-Inch Rifle Made in America.

The Squadron of Evolution and the Naval Reserve have occupied the minds of Americans, and particularly New Yorkers, so much lately that the shore defenses have not had as much attention paid to them as the last two days’ tests at Sandy Hook deserved.

That wave-swept tongue of land is so far away from the city that the thunder of its great guns is never heard here, and few of the pleasure seekers who go to the Hook ever feel like wading through the sand to the extreme point where the Army ordnance proving grounds are.

The place where the results of the tests are computed is a little office full of air-pumps, fine scales and other scientific instruments of bewildering shapes.

Only by looking out of the windows at the mass of guns, mortars, shells and carriages can the visitor assure himself of the fact that he is, indeed, among heavy artillery and artillery officers. The modern artillery officer is a scientist, who must be able to use mathematics, physics and chemistry in figuring out the complicated problems now involved by every shot fired from a big gun.

The test of the new twelve-inch gun on Friday and the test yesterday of the first lot of German smokeless powder ever used in large guns in this country have had such brilliant and even unhoped-for results that it seems probable that a new era in American heavy ordnance will date from the last two days.

The result of the twelve-inch gun trial was excellent. But yesterday’s tests with smokeless powder were such a surprise to all that they deserve first place.

Since smokeless powder came into use in Europe, American ordnance officers have followed the tests there with interest and they became desirous of trying it in great guns here, instead of the brown prismatic powder which is in use at present.

Three months ago 1,000 pounds of the German smokeless powder were secured by the officers at Sandy Hook, but none was tried until yesterday.

The powder comes in black cubes, three-eighth inches on each edge. It is extremely light, and may be cut like rubber, which it resembles so closely that no one would imagine it could possibly be gunpowder, and strgng gunpowder, too.

When pared into thin pieces it is translucent, and has a slight rosin-like tint when held to the light.

One great advantage of this powder is that it may be put into the gun by merely filling the bag used in loading, without laying each cube carefully alongside the other.

When using the brown prismatic powder much time is wasted, because the hexagonal prisms must lie carefully laid alongside of one another and built up in a cylinder.

Up to the present time American powder manufacturers have maintained that they could not make the smokeless powder.

Perhaps this proof of its superiority may help them to change that opinion.

However, while the officers at Sandy Hook feel greatly pleased with the new powder, they do not wish to commit themselves yet by unqualified recommendation of it.

There are many points which can be brought out only after using it a long time, such as its ability to remain perfect after a year’s exposure to damp, its uniformity of excellence, its quality of always giving the same results under the same conditions, etc.

For the test yesterday the 8-inch steel breech loading rifle was used. Three rounds were fired, ench round with an increased amount of powder. In each round the regulation 300-pound projectile was used.

The first shot was fired with thirty pounds of smokeless powder. The velocity attained was 1,490 feet a second, and the pressure was less than 18,000 pounds a square inch.

The second shot was fired with forty-five pounds of powder. The velocity attained with that shot was 1,990 feet a second, the pressure being 30,000 pounds a square inch.

Fifty pounds of powder were used for the third and last round. With this the shot attained a velocity of 2,162 feet a second, and a pressure of 38,000 pounds to the square inch was developed. The energy of the shot at the muzzle was 9,720 foot-tons.

To comprehend fully the great importance of these three shots, it must be remembered that in order to obtain a velocity of only 1,935 feet a second, with the same gun, 130 pounds of the ordinary brown prismatic powder must be used, and then a pressure of 37,000 pounds a square inch is developed.

This is almost the pressure developed by the fifty pounds of smokeless powder, and the latter charge gives the projectile 2,162 feet a second velocity.

This shows that a comparatively  small charge of smokeless powder will give results equal to or greater than the present large charges of prismatic powder.

With a 250-pound projectile such as is used in the Navy, this gun would give a velocity of 2,345 feet a second with fifty pounds of smokeless powder.

The reason why the heavier projectile is used is that it retains its energy for a much longer time than the lighter projectile.

When the gun was fired a small ball of smoke shot from the muzzle and dissolved almost at once, that part of the test being therefore also highly satisfactory.

The new twelve-inch gun may fairly be called an American gun, though the tube, jacket, and two of the forgings came from France, owing to the fact that when the building of this gun was started it was impossible to get such large steel forgings in this country.

The borings were made and the jacket was shrunk on here.

At the present time, the Bethlehem Iron Company can make such forgings; so the next fun will probably be made here altogether.

The new gun weighs fifty-two tons, and is about thirty-six feet long.

The contract requirements of this gun are that it shall be able to withstand a full charge of 440 pounds of brown prismatic powder, with a 1,000-pound projectile, which must attain a velocity of 1,950 feet a second, with a pressure not to exceed 38,000 pounds.

With an 850-pound projectile the standard powder is expected to give a velocity of over 2,000 feet a second.

The test consisted of four rounds which were fired on Friday and one round yesterday.

The powder proved unsatisfactory and therefore the largest amount used was 375 pounds.

But as a maximum pressure of 38,000 pounds was developed, which the gun withstood perfectly, the test may be considered as proving that the new toy is a great success.

A surprising and most welcome feature was developed after the firing.

It is well know that usually the breech mechanism of great guns becomes choked and swelled from the sudden release of gases, and that great difficulty is experienced when trying to operate it.

In the new gun this fault does not exist. One man operated the breech mechanism with ease during the entire course of firing, and the breech was not fouled perceptibly.

The gun will probably not be tested further till satisfactory powder is prepared. This will take some months.

With the required full amount of 440 to 450 pounds of powder, remarkable results may justly be expected.

As the tests have developed the fact that the fun can withstand the pressure of 38,000 pounds a square inch, there is no doubt that the maximum charge of 450 pounds can be safely and advantageously fired.

The tests for range and penetration will be made later.

This gun is the first twelve-inch high-poser gun ever made here. It may, however, soon be succeeded by a sixteen-inch gun, the calculations for a gun of that dimension being almost completed.

A new twelve-inch steel mortar is also now on the Government wharf ready to be tested.

The Army Commemorative Silver Dollar Coin shows with an image for a calendar in 1898 advertising smokeless powder. 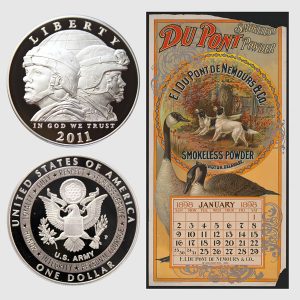