Today, the Arizona State Quarter Coin remembers the flooding of 128 years ago with reports from the Arizona Republican newspaper of February 28, 1891.

Great Damage on the Lower Gila.

No Communication Across That Stream.

The First Stage by the Black Canyon Route — Damage to Canals.

Captain Heil Hale, who is building the Tucson canal, down on the Gila near Agua Caliente, arrived in the city yesterday evening, having successfully crossed the Hassayampa and Agua Fria.

Water in the latter stream was still several feet deep yesterday and a number of freight teams were tied up on the road waiting to cross. Wading ahead and leading his horses, which were attached to a light buckboard, Captain Hale succeeded in crossing the treacherous stream safely. Two horsemen attempted to follow after Captain Hale had crossed, but one of them got caught in the quicksand, and the last seen of him he was standing in the river endeavoring to hold his horse’s head out of the water. Whether horse and man got out or were lost is not known. The river will not be safe for freights before Monday.

Captain Hale reports great damage by the flood along the lower Gila. At the first rise last week the water was higher than ever before, except in 1862 or 1863. According to water marks kept by old man Neahr, the Gila was eight inches higher then than it was last week. But the raise this week went above all others, being nearly two feet above any mark ever before known. The head of the Tucson ditch being in a cañon, the water poured over at a great depth, doing little damage. Below the cañon it spread and the banks of the ditch were washed out in several places.

Tuesday the river rose with such velocity that many people barely escaped with their lives. At times the water rose at the rate of four feet an hour and nothing could withstand its tremendous force. Great cottonwood trees that had stood for years were bent down by the force of the flood. In a minute the roots would be laid bare and the next moment they were borne away as drift.

All the lower country from the Hassayampa to Yuma were flooded and ranchers who supposed their houses above the reach of floods were compelled to flee to the mesas. Dennis Madigan, the destruction of whose house has previously been reported, had placed provisions in a tree and told some neighbors he would take to the tree if necessity arose. Captain Hale reports that he has not been seen since, and it is not known whether he survived or not.

J B Wedgeworth was working on the north side of the river when the flood came. He lived in a log house on the south bank. His wife and children were at home. From Agua Caliente mountain it could be seen that the water was several feet deep around the house but no signs of life were visible and it is not known whether the family were drowned or not. A boat was built at Agua Caliente and an attempt made to cross the river, but the current was so strong that a crossing could not be made. The water is supposed to have reached the large new adobe house of R.H. Wills, south of Agua Caliente and if so it has been destroyed.

On the Farmer’s canal below Agua Caliente every adobe ranch house was destroyed and much other damage done. Jake Wisner’s house was washed away in the first rise. A. Martin’s house was badly damaged then and the second rise is supposed to have finished it.

A. E. Martin, eight miles below Agua Caliente, lost 150 tons of hay. J. E. Nelson, a neighboring rancher lost fifty tons. On over in Yuma county, along the Mohawk canal, the result was the same and ranchers fled to the hillsides. No mail has crossed the river since February 18.

Bainbridge, the watchman at the head of Major Wham’s canal, was caught between the canal and the river in the first flood by the breaking of the headgates. The first night out he slept on some high land but the second night was compelled to take to a tree. The second day a rabbit swam into the tree for shelter, which ho caught and killed, eating one quarter. Calculating that he would have six days to live in the tree before the water would go down sufficient for him to escape, Bainbridge hung up the rest of the rabbit for rations. That afternoon some men on the bank who were looking for Bainbridge discovered him in the tree. A raft was constructed and pushed out to within fifty feet of him, beyond which they dare not venture for the swift current. A rope was thrown him, however, when he was hauled on board and taken to dry land.

The famous Oatman flat was completely submerged. It will be some time before the extent of the damage can be known, but it will no doubt be considerable.

Telegraphic Communication with Tempe, The Gila Too Rough for Boats.

Telegraphic communication has been again opened to Tempe. All day yesterday a force of men labored to stretch the wire over the river and near evening, they succeeded after four failures owing to breakage of tackle.

The Gila has not as yet been crossed. A train has been down each day from Tempo lately, carrying a boat and material for stretching a telegraph wire across that stream but an attempt to cross was deemed too hazardous. In the newly cut channel near the bridge the waves are rolling six feet in height and the river has fallen but four feet from the highest point reached. A trial will be made today to cross and if successful the wire will be in position by evening. The horseshoe bend to the north of the railroad bridge has cut into the track a distance of 2400 feet. The main current is under the northern bank and it is thought to be still washing away the bank.

A large amount of mail brought from Phoenix has accumulated at Tempe and another draft will be taken over this morning. If the Gila can be crossed the mail will be transferred by skiff to the south side and taken to Maricopa on a hand-car. Still considering the last reports from the Southern Pacific, it Is doubtful if there any trains will be found running on that line.

Queen creek, that odd stream without a mouth, issuing from behind the Superstition mountain, overflowed the Sacaton plains and found an outlet to the Gila river along the sand bank that lies about nine miles south of Tempe. The stream crossed the Maricopa & Phoenix railroad a short distance below Kyrene, though in no great volume and flowed on to the west.

Word was received at Tempe yesterday that C. S. Stewart’s upper trading station on the Gila reservation, at the Buttes, had been washed away. The goods were saved, but 250 sacks of wheat were lost.

Less Damage Done Than Was Feared—Loss to Indian Farmers.

At Lehi less damage was done than was thought to have been the case. H. Simkins, who arrived from there yesterday, says that but one house in the settlement was washed down— that of Mrs. G. E. Steele, near Harvey Harper’s. The Mesa canal broke allowing a stream to escape down the main street.

The Utah canal has had perhaps a quarter of a mile at its head filled with sand and about 300 yards of the canal washed away. The headgates are uninjured and the dam appears to have stood without damage. The loss will aggregate about $1000. Repairs will be made at once and water will be flowing in the canal by the end of next week.

The Indian fields above Lehi are but little hurt by the water that flowed over them. All the tribal wickiups and storehouses were destroyed, however, and the Indians are left dependent upon the Mormons for support.

No Serious Injury to the Arizona Canal Dam—Repairing the Consolidated.

A large force of men and teams are at work at the head of the consolidated Maricopa and Salt River Valley canals putting in a new headgate, cleaning out the canals and repairing damages done.

Word received from the Arizona canal head is that about 100 feet of the cresting in the farther side of the dam has been washed away, but the main dam is substantially uninjured. The canal bank, for a distance of one and one half miles, has been badly washed and a number of breaks in the canal made by the rush of the waters. Every idle man and team to be found is being put to work and the damage will be repaired as quickly as possible. On the lower canal Cave creek made several breaches of considerable extent, but in such manner that the canal can be repaired in a few days by means of scrapers.

Crossing Mountains and Swollen Streams in Coming from Prescott.

“The weather has been something awful the last ten days and the roads are terrible,” said Mr. Johnson. “It rained and snowed in the mountains until every little dry wash was turned into a raging river. The roads have been literally cut to pieces by the water. Granite creek never was higher and considerable damage was done along it. At the crossing of Black cañon creek, just where the road enters the cañon, a deep hole has been cut that is impassible. We took our wagon to pieces and carried it around, and then took our horses a circuitous route of two miles over the mountains to get around it.

“At Bumble Bee yesterday we overtook a party from Prescott who had been en route here for ten days. John Marion of the Courier was one of their number. We told them we were coming through and they attempted to follow us. They drove into the hole in the Black cañon and had to cut their horses loose and swim out. They came on down to New river last night and expect to come into Phoenix today.”

The Arizona State Quarter Coin shows with an image of the Gila river, circa 1927. 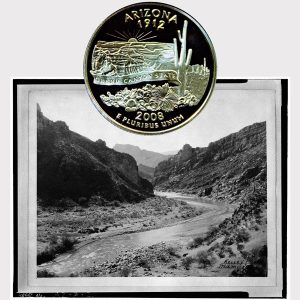