In the letter, he criticized the new American hereditary military order of the Society of Cincinnati and especially the Society’s symbol, featuring a Bald Eagle.

In the Private Correspondence of Benjamin Franklin, published in 1817, William Temple Franklin, his grandson, included the long letter in its entirety. The following is a short excerpt.

I hope therefore that the Order will drop this part of their project, and content themselves as the Knights of the Garter, Bath, Thistle, St. Louis, and other Orders of Europe do, with a life enjoyment of their little badge and ribband, and let the distinction die with those who have merited it.

This I imagine will give no offence. For my own part, I shall think it a convenience, when I go into a company where there may be faces unknown to me, if I discover, by this badge, the persons who merit some particular expression of my respect; and it will save modest virtue the trouble of calling for our regard, by awkward round-about intimations of having been heretofore employed as officers in the continental service.

The gentleman who made the voyage to France to provide the ribbands and medals, has executed his commission.

Some find fault with the Latin, as wanting classical elegance and correctness; and since our nine universities were not able to furnish better Latin, it was a pity, they say, that the mottos had not been in English.

Others object to the title, as not properly assumable by any but General Washington and a few others who served without pay.

Others object to the bald eagle, as looking like a dindon, or turkey.

For my own part, I wish the bald eagle had not been chosen as the representative of our country. He is a bird of bad moral character; he does not get his living honestly.

You may have seen him perched on some dead tree, where, too lazy to fish for himself, he watches the labor of the fishing-hawk; and when that diligent bird has at length taken a fish, and is bearing it to his nest for the support of his mate and young ones, the bald eagle pursues him and takes it from him.

With all this injustice he is never in good case, but like those among men who live by sharping and robbing, he is generally poor, and often very lousy.

Besides, he is a rank coward. The little king-bird, not bigger than a sparrow, attacks him boldly, and drives him out of the district.

He is, therefore, by no means a proper emblem for the brave and honest Cincinnati of America, who have driven all the king-birds from our country, though exactly fit for that order of knights which the French call Chevaliers d’ Industrie.

I am, on this account, not displeased that the figure is not known as a bald eagle, but looks more like a turkey.

For, in truth, the turkey is, in comparison, a much more respectable bird, and withal a true original native of America.

Eagles have been found in all countries, but the turkey was peculiar to ours; the first of the species seen in Europe being brought to France by the Jesuits from Canada, and served up at the wedding-table of Charles IX.

He is besides (though a little vain and silly, ’tis true, but not the worse emblem for that), a bird of courage, and would not hesitate to attack a grenadier of the British Guards, who should presume to invade his farmyard with a red coat on.

I shall not enter into the criticisms made upon their Latin.

The gallant officers of America may not have the merit of being great scholars, but they undoubtedly merit much as brave soldiers from their country, which should therefore not leave them merely to fame for their ” virtutis premium,” which is one of their Latin mottos.

The American Eagle Silver Dollar Coin shows beside an image of one page of Mr. Franklin’s letter to his daughter. 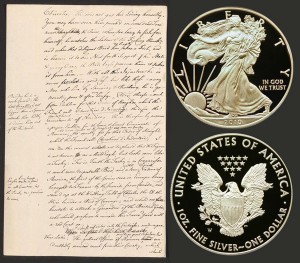