Today, the Bicentennial Quarter Coin remembers the revolutionary challenges of 1780.

From the Diary of the Revolution:

February 15. — The following sketch of the present situation of affairs in Charleston, South Carolina, is communicated by Colonel John Laurens: —

“The British army, said to be under the command of Sir Henry Clinton, are distributed on Port Royal Island, John’s Island, Stono Ferry, and a detachment last night landed upon James’ Island.

The head-quarters are at Fenwick’s house, on John’s Island. Four of their galleys have been seen between John and James’ Island.

The number of troops not known, supposed to be much diminished since the embarkation at New York.

About twelve deserters from the fleet and army have come into Charleston, and as many prisoners are taken by our light horse.

Different deserters from the fleet and army agree in reporting very heavy losses at sea.

Three ships foundered, many dismasted, one brig, two ships are taken, and brought into Charleston; a brig is carried into North Carolina.

One of the deserters informs, that thirteen sail were left on the rocks of Bermuda.

There is undoubtedly some grand impediment to the enemy’s progress.

All their horses perished at sea, and much of their furniture was captured.

Three days ago, passed by Charleston bar, in a hard gale of wind, a sixty-four gun ship, a frigate, and some transports.

These may be gone to New York for further supplies; but all is conjecture.

Near the bar of Charleston daily appears a frigate and other ships of war, reconnoitering and blocking up the harbor.

The enemy’s delay has afforded an opportunity for strengthening the lines of Charleston, which will be in pretty good order tomorrow.

The number of men within the lines uncertain; but by far too few for defending works of near three miles in circumference, especially considering many of them, to be citizens, and unaccustomed to the fatigues of a besieged garrison, and many of the Continental troops half naked.

Reinforcements are expected — General Hogan is within a few miles.

The Virginia troops are somewhere ! — assistance from that sister State has been expected these eighteen months.

General Moultrie is forming a camp at Bacon Bridge, where he has about five hundred horse belonging to South Carolina — Baylor’s and Bland’s regiments of Virginia.

General Williamson is encamped at Augusta — a thousand men are expected from his brigade.

General Richardson and Colonel Carlen are raising the militia at and about Camden.

At this moment the escape of the Americans depends on further delay on the enemy’s part: two or three weeks more will make this garrison strong.

The inhabitants in general are in good spirits; competent judges say that Sir Henry Clinton will then have cause to repent his enterprise.

This affords encouragement, but events in war are uncertain; and if we do not receive assistance, the next intelligence may be quite contrary.

Footnote: General Clinton sailed from New York on the 26th of December, 1779, and after a very tempestuous voyage, in which many of his ships were disabled, and most of his cavalry horses lost, he landed on John’s Island on the 13th of February.

The Bicentennial Quarter Coin shows with a view of “Charles Town,” circa 1770. 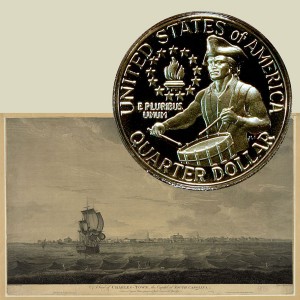